The importance of the art of Ernest 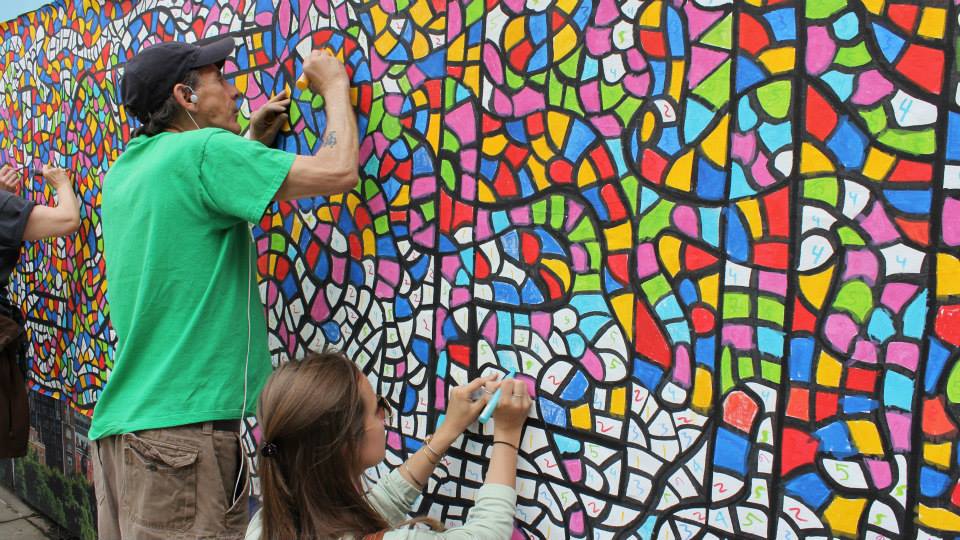 Memorial Day saw hundreds of Bostonians join a progressive art movement by coloring in blocks on a 5-by-41 foot canvas spanning the wall of the Prudential Center along Boylston Street. The paint-by-number mural strives to unite the community and revealed a hidden message once completed: Don’t forget to love life.

“It’s really about appreciating life in all forms, all of creation,” Ernest McKinley English, the chief designer of the mural, said on Tuesday. “And having that love guide you and what you’re doing.”

English, a research affiliate at MIT’s Community Innovators Lab, partnered with ArtLifting, a social enterprise that empowers individuals who are in art groups at hospitals and shelters by selling their artwork, to create the project.

“We aim to help homeless and disabled artists,” Spencer Powers, co-founder of ArtLifting said. He and his sister Liz  found English’s mission very much inline with their own. They were both focused on giving back to the community. “The idea [for ArtLiftingl] stems from Liz’s work with homeless shelters.”

Liz met English through another start-up at a Harvard innovation lab and thought it would be a great partnership. Liz had previously worked with Cambridge and Boston shelters to create an annual art show called CityHeart.

“Typically their initial start in art is as therapy,” Spencer said of the ArtLifting participants. “In many homeless shelters there exist many art programs for people struggling with disabilities and challenges. And over time these people become gifted artists.”

But according to English, the mural at the Prudential Center did not call for especially dedicated artists. The contribution of simply coloring a square section of the whole was what the project was all about.

“Just because you don’t view yourself as [an artist] doesn’t mean you can’t participate in the community,” English said. “You’re a member of that community so you need to show it and express it. Making art is one of the many ways to do that.”

English himself was not always an artist. In fact, he had no traditional art training.

“It started off with me writing my philosophy … How I wanted people to value one another moving forwarded in society and how I wanted to be a part of that,” English said of his path to discovering the social possibilities of art. “It makes sense that the art is what it is now.  It does so much more for me as the artist to see other people affected in a positive way by the art.”