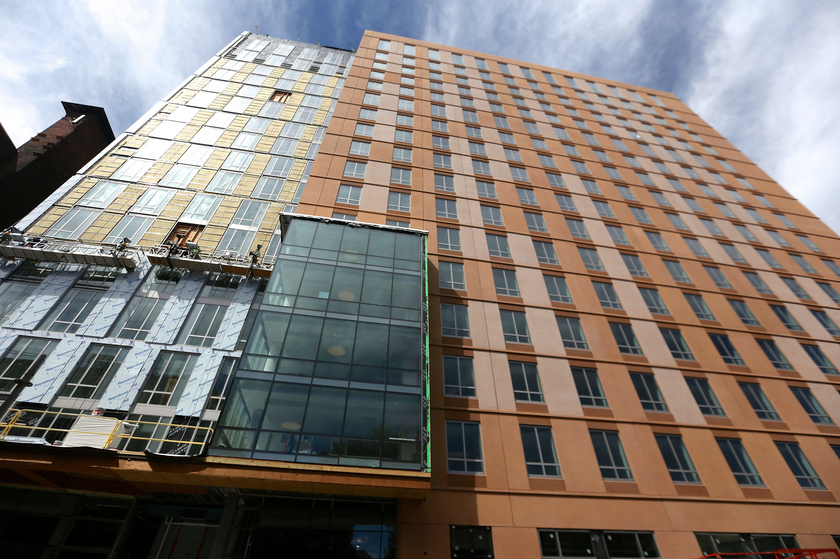 With the ever-rising student population, Northeastern is continually addressing the problem of housing. As more undergraduates enter and the commitment to provide on campus housing increases, students have continued to seek other means of housing off campus.

Northeastern has 8,414 beds for this fall semester. With roughly 16,640 undergraduates and approximately 54 percent living on campus, as reported by US News, 8,985 students should be living on campus, but 571 remain without beds.

Lila Sevener, a sophomore political science and environmental studies major, and Laila Mooring-Frye, a sophomore engineering major, both submitted into the Northeastern lottery system for fall 2014 housing with four other roommates.

When Sevener and roommates went to pick housing, ranking in the 3,000 range, their preferred housing was already locked.

“We had plans for six people to live together on campus, and when the six-person rooms came up, there were none left, and we split into four and two,” Sevener said. “And more and more housing disappeared, so there were only two-person rooms left, and this was the third or fourth day of housing selection.”

For Sevener and her roommates, on-campus housing was no longer an option. After contacting housing, they filed an application to be put on the placement list, which would guarantee them a spot on campus but not necessarily one they wanted. The possibility that they wouldn’t know their fate till August forced them to look off campus, where they found lower overall prices.

Like many students, Sevener had to go through the waiver process, an application that allows students to review their two-year on-campus contract with the On-Campus Residency Exemption Committee.

“The waiver process is for students who believe they have a particular hardship or circumstance that makes living on campus not possible,” Renata Nyul, the director of communications for Northeastern, said. “These students may submit a petition and the university will contact them to discuss their particular situation.”

Ultimately, Sevener and her roommates had their waiver approved, after being repeatedly told that their request would not be approved.

ity throughout the entire process, it would’ve made everything a lot easier,” Mooring-Frye said.

When sophomore business and marketing major Natalia Laresgoiti went to register for housing, she and her friends were told that there was no more available.

“None of my friends had housing,” Laresgoiti said. “They never fully explained what was happening or if we’d get housing.”

At the time, the only rooms available were for males, and the roommates were told that all they could do was wait and hear back from housing. Luckily, Laresgoiti and friends found out a few weeks later that they would be able to live on campus after all.

“It wasn’t a huge misunderstanding, it was just a confusing process,” Laresgoiti said.

Northeastern guarantees housing to all freshman and sophomore students; only in the instance of late applications or transfer students is housing not guaranteed.

In 2006 Northeastern made a commitment to the city to add another 1,800 beds to on-campus housing. To further remedy the growing demand for housing, Northeastern completed International Village in 2009, adding 1,200 beds to campus.

Since the completion of International Village, Northeastern has broken ground with Suffolk Construction in 2012 on the 17-story, 720-bed East Village residence hall. The opening of East Village is set for January of 2015 and is the current remedy for the ever-growing housing demand.

“We are continuing to work on providing safe, convenient and affordable housing to all of our students,” Nyul said.