Stephen Burgard, director of the School of Journalism and Pulitzer winner, dies 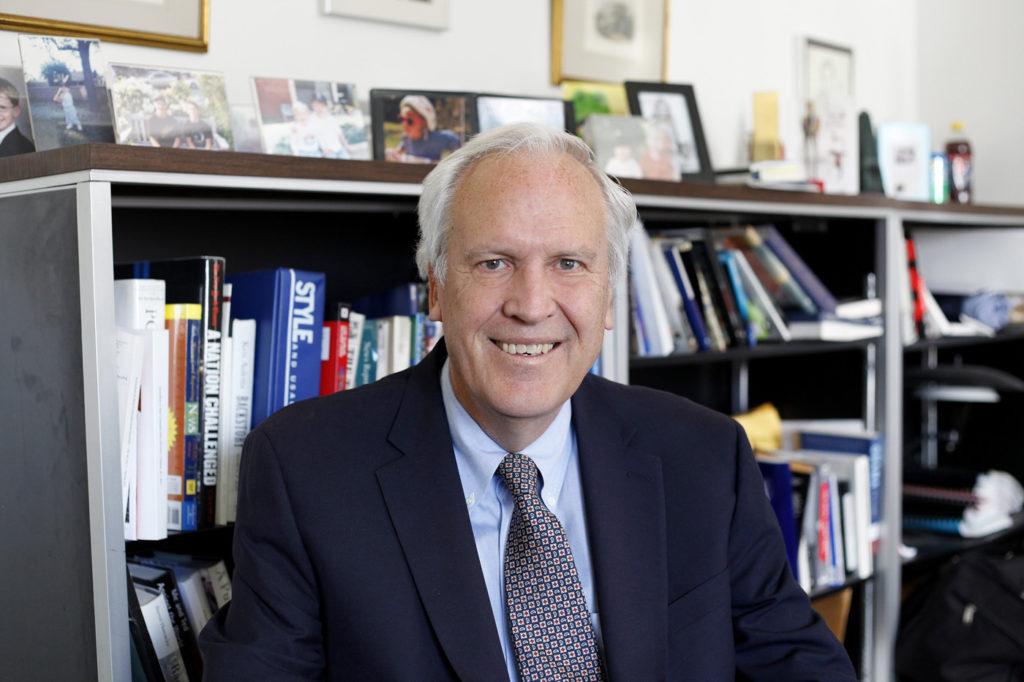 Director of the School of Journalism and Pulitzer prize winner, Stephen D. Burgard, died while on sabbatical at the Harvard Divinity School. His death was announced by Bruce Ronkin, the interim dean of the College of Arts Media and Design, in an email to faculty and students.

Burgard, a resident of Arlington, died Sunday at Massachusetts General Hospital due to a lung ailment, as reported by the Los Angeles Times. He was 66 years old.

“As Director of the School of Journalism, Steve oversaw the maturation of a nationally respected program,” Ronkin said. “As an academic leader in the new college, Steve helped draft the CAMD governance documents and worked with his colleagues to help build a new college where media would become one of its key strengths.”

Before joining the Northeastern faculty in 2002, Burgard served 26 years as a newspaper editor and reporter. Working at the L.A. Times from 1996 to 2002, Burgard led the editorial page of the paper, covering the aftermath of the Rodney King verdict in Los Angeles.

In 1994, he received a Pulitzer Prize for the Times’ coverage of the 1994 Northridge earthquake. Burgard published two books exploring the topic of politics and religion, “Hallowed Ground” (1997) and “Faith, Politics and Press In Our Perilous Times” (2010), an issue he also covered in the 2000 presidential campaign.

Dan Kennedy, associate professor of journalism with a focus on multimedia and digital journalism, first met Burgard in the late 90s while Burgard was working at the L.A. Times and Kennedy was the media columnist for the Boston Phoenix. The two struck up a correspondence that lasted until Kennedy decided to return to Northeastern as a professor.

“He was a really great supporter of mine and a great mentor,” Kennedy said. “He was always somebody I could go to for advice.”

Burgard planned to return from sabbatical this spring semester and continue his directorship before resuming his faculty position. Kennedy stated that Burgard did not want another long stint as director and would remain in the position only until a replacement was found. The School of Journalism had begun the search process for a new director before Burgard’s death.

Burgard graduated from Brown University in 1970 and received his Master’s from Boston University’s College of Communications in 1976. From 1971-73, Burgard served as a member of the US Navy aboard the U.S.S. Little Rock in the Sixth and Second Fleets in the public affairs office.

In the Buckingham Browne & Nichols fall bulletin from 2010, a K-12 day school in Cambridge where Burgard graduated from high school in 1966, Burgard was profiled to have fallen in love with journalism while aboard the Little Rock. He even produced a radio and closed circuit television news show for the 900 person crew, as reported by Peter DeMarco.

His interest in media translated to his tenure at Northeastern, including changing the curriculum to keep with current digital journalism trends and bringing new professors to the school who, as stated by Lincoln McKie, director of the editorial lab in the School of Journalism, are on the cutting edge of new media and journalism.

Mike Beaudet, a professor of the practice in the School of Journalism, met Burgard as a graduate student at Northeastern before returning to the school to teach.

“During my graduate studies at Northeastern, I saw firsthand Steve’s passion for journalism and his belief that journalists hold a critically important role in a democratic society, but also have an enormous responsibility to the public they serve,” Beaudet said in an email to the News. “Steve felt strongly about journalism education and its need to evolve with the changing field, and because of that he left a significant mark on the School of Journalism. He was always very approachable and down-to-earth and I will certainly miss his laid-back, but encouraging way of interacting with people.”

Nicholas Daniloff, who retired this year from Northeastern, was director of the school until 1999 when Burgard replaced him. He noted that another significant achievement of Burgard’s was the relationship he created with the university.

“As director, he was always very friendly, upbeat and a very good leader,” Daniloff said. “One of the important things he did was to establish good relationship with the higher-ups and continue the work on educating them on what journalists do. I think he did a great deal to bolster the reputation of the School of Journalism within the university.”

A point reiterated by many of his colleagues was Burgard’s commitment to his family. Both Susan Conover, the journalism school’s administrative coordinator, and McKie noted Burgard’s strong parenting. McKie noted that there “was no better dad than Steve,” and his approach to parenting and advice defined him.

“One of the most important characteristics for me about Steve was the fact he was a family man,” Conover said in an email to the News. “He never hesitated if I had a family issue. He always said family comes first. He raised three terrific kids, a real testament of his family values. Steve will be missed. But I am honored to have known him.”

Burgard is survived by his children Helen Burgard, 26, of Lexington, Andrew Burgard, 20 of Claremont, and Patrick Burgard, 18 of Lexington; sister Beth Dater-Jennings of Greenwich, Conn.; half-siblings Chris Snow of Provincetown and Robyn Snow of Brewster and his former wife Sharon Burgard.

“My dad was a man of outstanding work ethic and poise – attributes which he spent every day trying to impart on his children,” Patrick Burgard said in an email to the News.

Funeral arrangements have yet to be announced.