Carrying the Weight Together movement comes to Northeastern 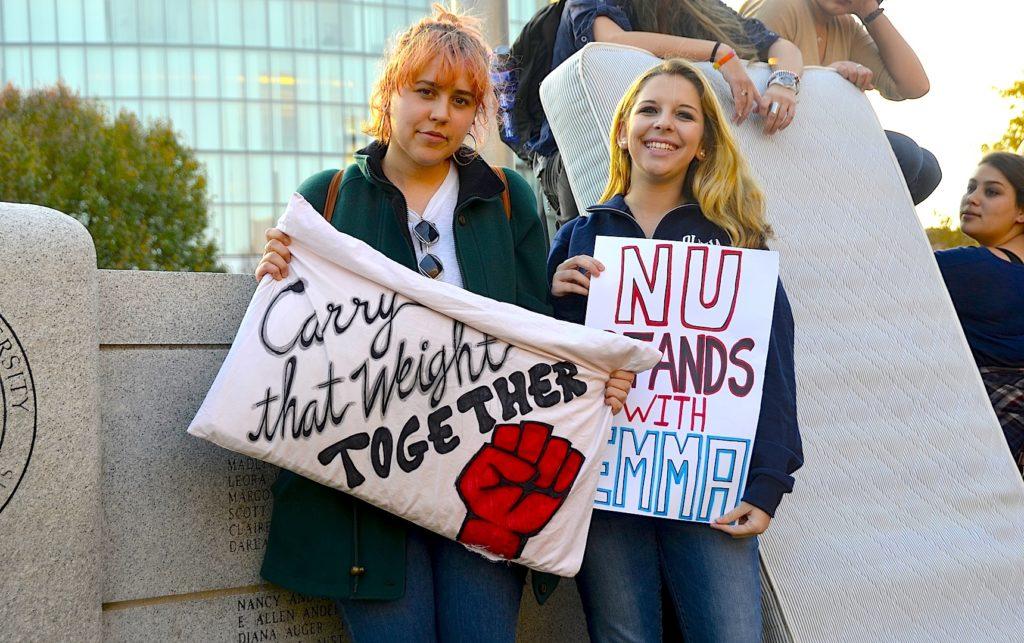 On Nov. 12, Northeastern held a campus day of action in the name of the Carrying the Weight Together movement that started over the summer by Columbia University senior Emma Sulkowicz.

Organized by the Feminist Student Organization (FSO) and members of Socialist Alternative, a group currently in the process of gaining club status, the event was also sponsored by NU Sexual Health Advocacy, Resources and Education (NU SHARE), Strong Women Strong Girls at NU and the Progressive Student Alliance. The mission of the day was to stand with Sulkowicz and draw attention to survivors of sexual assault and rape culture.

“I think it’s a really great movement,” Helen Sharma, a third-year international affairs and anthropology combined major and FSO president, said. “I think that the issue of sexual assault doesn’t get enough coverage, and I think more than often, it gets the wrong kind of coverage.”

The Carrying the Weight Together movement began after Sulkowicz began carrying the mattress she was raped on around Columbia’s campus, drawing attention both to the crime and to the university’s mishandling of her case by allowing her assailant to stay enrolled in the school.

The project, which is also a performance art piece for Sulkowicz’s thesis, explains that she must carry a standard dorm mattress with her everywhere she travels on campus, symbolizing the weight she carries as a survivor of rape. Sulkowicz is not allowed to ask for help but is allowed to accept it when offered and will carry the mattress for as long as she and her rapist both attend Columbia.

Allie Rickard, a senior art history major at Barnard College, helped to organize the national day of action for Carrying the Weight Together, which occurred on Oct. 29.

“I think our main goal is to really get communities across the nation to visibly show their support for survivors, to help dismantle the stigma that survivors usually face [and] help promote change in their communities and administration,” Rickard said.

The national day of action called colleges across the county to show their support and solidarity for Sulkowicz and survivors by carrying a mattress to draw attention to sexual assault.

At Columbia, the national day of action featured a march through campus and a rally. The gathering hosted 28 student organizations, each carrying a mattress to represent the 28 Title IX complaints that have been filed at the school. Nationally, over 130 campuses in 30 states and over five countries participated in Carrying the Weight Together on Oct. 29, as reported by the group’s Facebook page.

“I think that all communities, not just colleges and not just Columbia deal with this,” Rickard said. “As a member of that community I feel like I need to work towards change.”

At Northeastern, organizers like sophomore sociology major Elan Axelbank only found out about the national day of action a week before, so they decided to plan instead for a demonstration on Nov. 12.

“There’s a couple of purposes to it,” Axelbank, also a member of Socialist Alternative, said. “One is to stand with Emma Sulkowicz of Columbia and show that she’s not alone and metaphorically help her carry that weight, and [two], that members of Northeastern

University stand with those who have been affected by sexual assault.”

Axelbank also noted that a key component of the event was standing against rape culture and speak out against the large number of sexual assaults that goes unreported.

“It’s important that students,especially typically marginalized groups, often women’s voices are not heard, and it’s important to empower them,” Axelbank said. “It’s ironic that I’m saying this because I’m a guy, but I really believe the purpose is to empower women to speak out about these issues because they’re important.”

The day of action on campus featured a march from Centennial Commons to Snell Library and back followed by a speak-out portion from members of sponsoring organizations as well as an open mic portion for those who wished to speak about the issue and their experiences.

Aside from raising awareness, groups involved handed out sheets listing resources for those who may be or become victims of sexual assault or find themselves in a potentially dangerous situation.

Moya Bailey, a Post Doctorate Fellow in women’s, gender and sexuality studies at Northeastern, states that overall the movement forces people to deal with the issue of sexual assault in a way they never have before due to Sulkowicz’s unprecedented public display.

Bailey states that universities are trying to address the issue but are nervous about upsetting other students, as well as legality issues.

“I think there has to be a different climate, I don’t think survivors feel safe reporting,” Bailey said. “There’s a lot of victim blaming and the feeling that this is inevitable for young women.”

She also notes that not enough is spent on addressing men, potential accusers and how society addresses masculinity. K-12 education on women’s and gender studies is another way Bailey thinks that society could address sexual assault.

“I really want to stress shifting the energy of the conversation to prevention,” Bailey said. “Prevention doesn’t need to focus solely on the survivors. We need to have a conversation as a society that this type of behavior is unacceptable and that we currently just [passively] accept it.”

For Sharma, despite the conversation of sexual assault making headway, it is an uphill battle.

“I think on the university level that this is just generally true, that as young people, we tend to be a little more accepting of things that are progressive and accepting of debate around issues like sexual assault,” Sharma said. “I think that we’re the first step. As ideas about sexual assault and ideas on feminists change on college campuses, those students graduate and go into the world and the job market and ideally those values that we have established as a university will spread to society in general.”

Sharma hopes that the campus day of action reached those who were previously unfamiliar with feminist and anti-rape rhetoric and helped to explain such terminology rather than alienate it, and encourage them to become active within their community.

Sophomore environmental science major and member of FSO Maya Gilchrist attended the rally and hoped that it will make people reconsider their previous conception on rape culture and what it means.

“If it even makes one person stop and think about their previous actions or attitudes that fit into what we’re trying to fight, then I think that it’s worth it,” Gilchrist said.