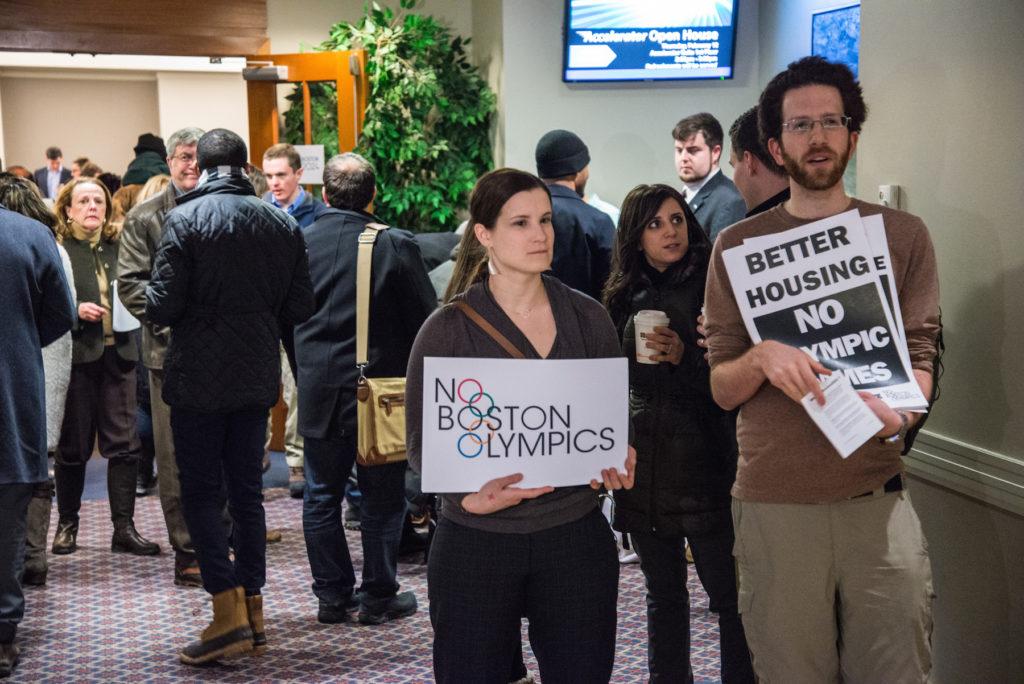 In a crowded room the night of Thursday, Feb. 5, sounds of jeering, cheering, hissing and applause bounced from the walls of a community meeting discussing the proposed Boston 2024 Olympics.

The Olympic Bid Community Meeting was conducted by the City of Boston with Boston 2024, the group behind Boston’s securing the hosting city rights. The group was present to answer questions and to present their plans.

As Fish went to the podium, a video played of past United States-hosted Olympic Games. Fish said the Olympic bid is in a proof-of-concept stage, meaning plans may change and community input may cause Boston 2024 to look at things differently. This was the first of nine meetings to get input from the community.

“How do we see Boston in 2030 and 2040 and 2050?” Fish said. “The opportunities that will present [themselves] on us as a community, coming together and thinking about what we truly want to be at that point in time, which creates an opportunity for us to come together as a community and have that robust conversation.”

Though the presentation focused on the positives of the Olympics, the attendance of the meeting was divided between criticism and support for the proposition. One sign in the audience read “Better Schools No Boston Olympics,” while another had the word “no” cut out of a different sign and edited with a marker to read “Yes Boston Olympics.”

“I thought [this meeting] was a good opportunity,” Dempsey said. “This is clearly not a city united behind this bid … and that will be a continued message.”

Claire Bleckman of Somerville and Jonathan Cohn of Fenway were opponents who held signs for No Boston Olympics. Cohn said that Boston 2024 is made of corporate lobbyists, university presidents and CEOs. He said that money used for the Games should be used to fight poverty and hunger.

“It’s a diversion of time, money and resources,” Cohn said. “Although Boston 2024 talks about improvements, that’s not what’s important to them.”

Some believed the bid could bring benefits for Boston. Chris Ryan of Southie said he supports the Olympic bid and believes it will bring money and jobs.

“I think how much good it would do for the city … the city I call home,” Ryan said. “Our kids are going to reap the residuals.”

Mark Favermann of Fenway is the founder of Favermann Design, a boutique design firm that worked for two and a half years on the 1996 Atlanta Olympic Games. Favermann Design’s job was to design the “look of the games” including the integration of corporate branding, wayfinding, signage, special event creation, temporary architecture and urban design elements into the Olympics venues and adjacent pathways, according to Favermann.

Favermann said he drew the original sketch of “The Quilt of Leaves” – the visual theme of the Atlanta Olympics – used on venues, uniforms, products and television. Favermann said that instead of insisting the Games not be considered, he suggested the opposition propose methods of making the Olympics better for Boston.

“[People opposed] have every right to be critical, but I feel like they can’t be totally critical – it has to be constructively critical,” Favermann said. “And frankly, I haven’t seen a whole lot of constructive criticism yet … They’re not [presenting] any [estimates of costs] or any goals saying ‘this is the alternative to what is being presented.’”

As both Manfredi and Blauwet went to the podium to give a presentation, another video played about Boston’s qualities: efficiency, walkability, education, history and how athletics are a “catalyst for our educational and economic prosperity.”

Blauwet’s presentation gave personal experience on how sports gave her confidence and changed her life, despite her disability – a spinal cord injury when she was 16 months old. A competitor in the Boston Marathon, Blauwet cited the unity Boston sports bring to the city.

“Boston is an incredible platform for the transformative power of sport,” she said.

Manfredi showcased the Olympic plan created by Boston 2024. Aspects of it center on the walkability of the event, having 28 venues inside a 5.3-kilometer radius. One of the ideas included archery at the Massachusetts Institute of Technology (MIT) Great Dome. The most incendiary proposal was beach volleyball at a temporary facility in the Boston Common that caused groaning by crowd members.

As Manfredi and Blauwet returned to the table, Fitzgerald approached the podium to prepare the audience for the question-and-answer session. Just as the session was about to begin, Mayor Martin J. Walsh arrived at the meeting. Answers came from him as well as Boston 2024.

The attendees’ questions were colorful, ranging from the transparency of Boston 2024 and the Olympic bid, transportation, employment, housing, health care and debt. There were also several questions that did not relate to the Olympics, in which people voiced complaints about the city.

When dealing with matters of taxpayer money, Walsh made it clear:  that would only go to improving the infrastructure of the city. Several questions have been raised about whether the city’s money would go to building Olympic venues.

“I made it perfectly clear that my top priority is to protect the taxpayers and residents of the City of Boston,” Walsh said. “If I feel that there’s something wrong here, I am not going to support this Olympic bid moving forward. If I feel there’s a venue that doesn’t work, I’m going to make sure that that doesn’t happen.”

Favermann said even before Boston knows if they are hosting the Olympics that the bid is causing conversations about community needs, and he believes with proper planning, the Games can be cost-efficient.

“The Olympics’ planning and process sets real goals for real implementation of needed upgrades to things like infrastructure and into facilities and into thinking processes that would just sort of be pushed on and on by governmental agencies without the civic drop-dead date of an Olympics,” Favermann said.