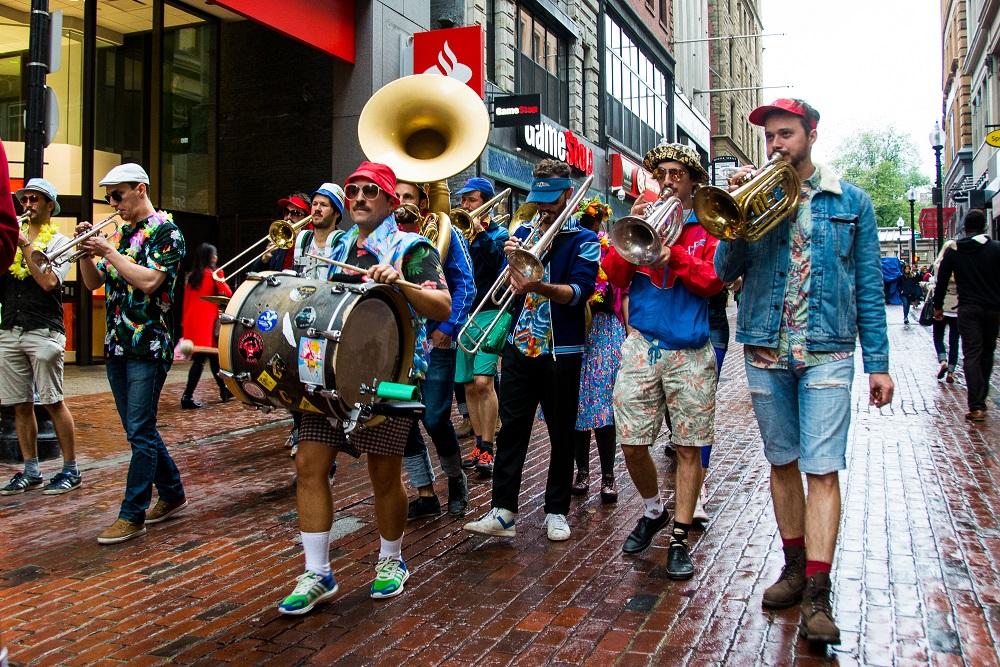 Costumed musicians gathered outside of Primark in Downtown Crossing with protest signs bobbing above the mob as the din of brass instruments rang through the roads. The street-band activist revolution was in full swing.

The 10th annual HONK! Festival, a grassroots brass-band festival that uses music to promote social awareness, kicked off on Oct. 9 with the Day of Action in central Boston. Twenty-seven bands and over 600 musicians played in the streets for the weekend. Causes represented at the festival included those of Fight for $15, Black Lives Matter, the United Food and Commercial Workers and various other groups standing for environmental and peace organizations.

“We bring fun to the fight,” Ken Field, a member of HONK!’s organizing committee, said.

According to Field, the festival originated in Somerville with the blasts of a couple of brass bands to advocate for social causes. Now ,the festival has expanded to Chicago, New York City, areas of California and other parts of the US.

HONK!’s Day of Action was the first of a three-day event that brought together activist marching bands from around the globe. The main event march, HONK! Against Corporate Greed, championed increasing the minimum wage and decreasing wage theft.

Festivities began on a drizzly Friday afternoon as bands congregated at various corners of the Boston Common. When the march began, each ensemble split off in different directions, grouped by the causes they supported.

Dead Music Capital Band, whose members’ outfits ranged from ripped and faux blood-stained  shirts to gold lamé leggings, marched by City Hall and through another festival in Faneuil Hall until it reached a corner outside McCormick & Schmick’s Seafood and Steaks.

“McCormick & Schmick’s, you can’t hide. We can see your greedy side,” the protesters chanted as they marched.

At the end of the march, bands reconvened outside of Primark and ended their protest parade. Street musicians in Downtown Crossing played together, ending the day on a lighter musical note.

“I think it’s really great to celebrate activist marching bands,” Enid Williams, a clarinet player with Forward! Marching Band from Madison, Wisc., said. “I don’t think there’s any other festival that does anything like this.”

On Saturday, the street bands took hour-long shifts playing in numerous locations throughout Somerville. Dirty Water Brass Band, a band out of Somerville, played a show in Davis Square. The boom of the bass drum set the beat as the band played a soul and R&B set for a crowd of 300 in support of Democratic presidential candidate Bernie Sanders.

Children climbed light poles just to catch a glimpse of the performers in their gaudy black uniforms emblazoned with gold thread. Around the perimeter of the show, volunteers handed out fliers in support of Bernie Sanders while members of other bands enjoyed the show and spoke about their causes with locals.

“Not all music is infused with politics, but this stuff is,” Tim Plenck, a host for musicians from Cambridge, said.

Plenck said he felt the socially-minded tinge helped connect the community to some pressing issues.

“Our community needs stuff like this,” he said. “We want the artists to be among the people.”

On Sunday, HONK! bands and community organizations walked in a parade from Davis Square to Harvard Square, but the real action came from New York City-based Rude Mechanical Orchestra.

The band played on Sunday at 7:45 p.m. outside the South Bay Detention Center in a “noise demonstration” to show its support of undocumented immigrants, according to Field.

“It’s a simple action,” Field said. “They stand outside the gates and play music for the [detainees]. The band is saying ‘We know that you’re there, and we are in solidarity with you.’ The detainees flick the lights of their room on and off to show that they know they are not forgotten.”

Looking forward, Field emphasized HONK! as a precedent for other small-scale street festivals to pop up around the country.

“We don’t think growing makes sense,” Field said. “If it gets too big, it can’t be grassroots anymore, and that’s the essence of HONK! A lot of musicians have been inspired to form their own bands and their own festivals, and that’s what we really hoped for.”