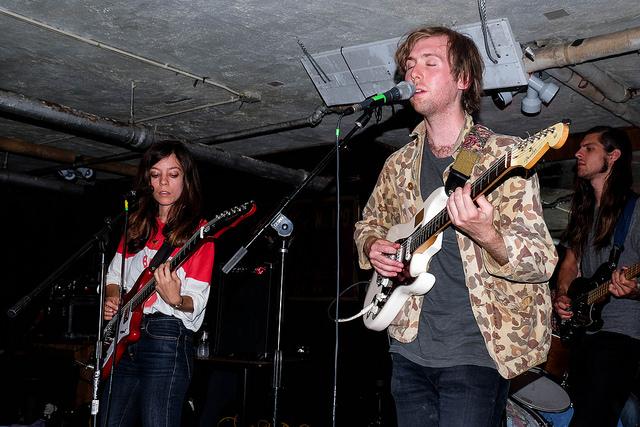 By Liam Hofmeister, inside editor

Artists usually confined to the world of underground house shows will be brought to the mainstage this weekend for Hassle Fest 7.

Hassle Fest, a three-day music festival organized by BRAIN Arts, a nonprofit concert organizer based in Jamaica Plain, will take over the Cambridge Elks Lodge, Out of the Blue Too Gallery and Brighton Music Hall, the largest venues to host the festival thus far.

According to Sam Potrykus, co-director of BRAIN, Hassle Fest will showcase bands producing new, interesting work that may not be as visible in the music scene.

“I’d call it underground because it is not genre-specific,” Potrykus said. “Hip-hop, punk, electronic. By and large, it’s experimental. It has this avant-garde-ness. They came from the underground.”

Bands like California-based punk group Flipper, New Jersey-based indie-rock band Screaming Females and Boston-local Pile are billed to play over the weekend. Roughly 50 bands from across the country are meeting in Boston to play at the festival.

Hassle Fest stands out when compared to larger music festivals, such as Boston Calling, because of the proportion of Boston-based bands that get a chance to showcase their talent, according to musician Steven Instasi.

“There are a lot more local bands,” Instasi, lead singer and guitarist for Black Beach, a rock band from Middleborough, said. “Hassle, in general, gives some pretty weird and obscure bands a shot to play some pretty cool stuff.”

Hassle Fest not only represents an openness to all genres but also a creative spirit among artists, according to Santiago Cárdenas, lead guitarist for Free Pizza, a baby-punk band that formed in Boston but now calls Nashville its homebase.

“We owe everything to the Boston music scene,” Cárdenas said. “People go to all kinds of shows, and bills are more mixed, so you get into a lot of stuff you wouldn’t have gotten into and that changes the music. “

According to Potrykus, sometimes the goal of finding interesting, fresh music can be lost behind the cash incentives.

“We are the only festival of this size [that] is run by volunteers and is not profiting off of it,” Potrykus said. “Our choice in band is not based on money, we just choose the bands that we think are the best, so we’re very free. We are not beholden to anyone to make money – not even to ourselves.”

BRAIN looks to develop a sustainable environment for creative expression, Potrykus said. Hassle Fest aims to be the nurturing space for these underground acts.

Potrykus said that BRAIN at its core, is grassroots and linked the organization with a history of booking bands to play small gigs in someone’s basement or garage. Despite that the festival –  now in its seventh year –  has grown to the point of needing an official venue, participants still feel the local authenticity of Hassle Fest.

“[Hassle Fest] does exist in this little, warm Bostonian context,” Patrick Miller Gamble, a four-year Hassle Fest volunteer, said. “It’s not alienating. It feels like I’m entering a relationship with artists around me instead of looking up at what the music industry machine had decided to put on the stage.”

Ultimately, Hassle Fest 7 is just another way to develop the experimental arts community in Boston – one based in innovative music for all ages, Potrykus said.

“BRAIN is really here to build infrastructure and community. We want to foster anything that perpetuates the independent arts culture that we stand for.”