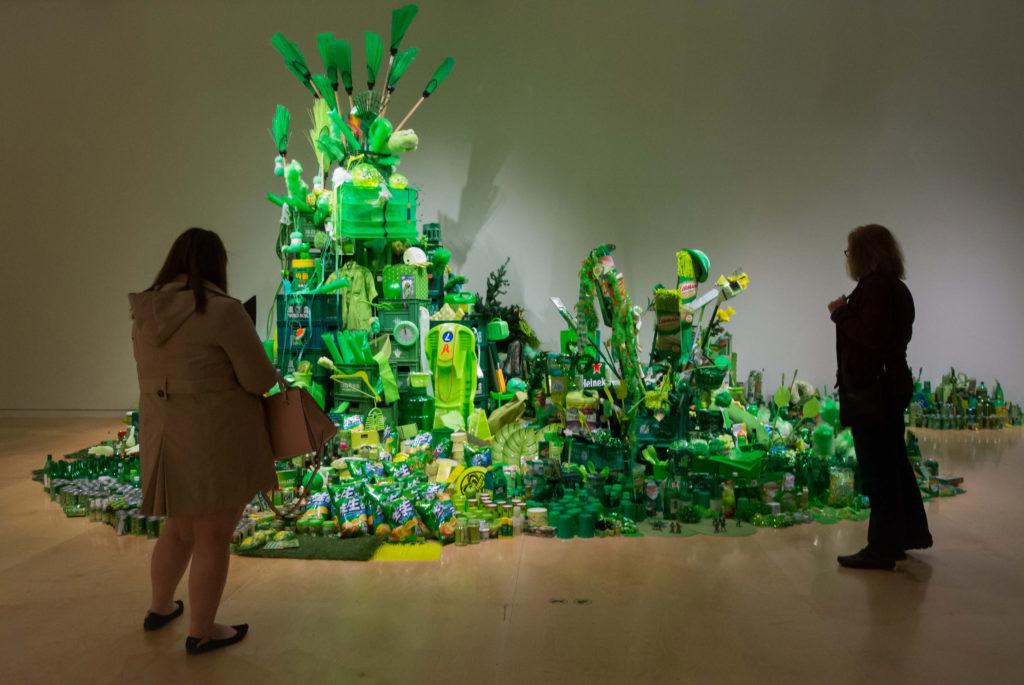 By Juan A. Ramirez, news staff

It is fitting that the Museum of Fine Arts’ (MFA) ambitious new exhibition titled “Megacities Asia” is also its largest contemporary art show to date. Megacities, metropolises with populations of 10 million or higher commonly found throughout Asia, are sprawling urban spaces; “Megacities Asia” occupies the entire museum, extends to its front lawn and throughout Boston.

The exhibition, which will run from April 3 to July 17, features 17 works by 11 artists, including five commissioned by the museum and all evoking the spirit of their respective homes. Denizens of a continent that has been on a steady developmental rise, Asian artists used this exhibit to react to the growth around them.

Many, like politically-oriented Chinese artist Ai Weiwei, incorporate everyday objects into their work in order to directly address their countries’ issues. His sculpture, “Snake Ceiling,” which has been loaned to the museum’s collection for some time now, is made entirely of interconnected children’s backpacks in order to draw attention to the Chinese government’s lack of involvement after more than 5,000 children died in a poorly constructed school during an earthquake.

Other works on display, such as Shanghai-based artist Hu Xiangcheng’s “Doors Away from Home,” explicitly evoke the ethos of their surroundings. Commissioned specifically for this exhibition, the installation is a room separated by six doors, all of which are adorned with hundreds of everyday items like postcards, fabrics and photographs.

Xiangcheng invited several craftsmen and families to help decorate the separate spaces in an authentic manner, bringing the spirit of Chinese home life to the piece in a combination of ancient craftsmanship and modern living.

“A lot of cities in Asia are at a turning point because of increases in population,” Xiangcheng said during a curatorial preview of the exhibition. “The doors represent the diversity of life during a point in which agrarian culture in China is crossing through time.”

Aside from tending to their own local interests and materials, the artists exhibited in “Megacities Asia” present large installations meant to directly engage the viewer, asking them to consider their roles within the art world. Delhi-based artist Asim Waqif, whose interactive “Venu” is constructed from bamboo scaffolding that responds to visitors’ presence and touch, working to bridge the gap between viewer and artwork.

“Viewers have been trained so much to be passive,” Waqif said as the structure whirred and buzzed behind him. “I was very interested in how to get people to be curious and even irreverent to the art.”

Waqif’s installation is far from being the only immersive walk-through in the exhibition. A life-size diorama of a slum house in Mumbai, a recreation of a Beijing rooftop pigeon coop and “Chaosmos Mandala” and room covered in reflective mylar with a giant glass chandelier in the center were all main features.

This installation by Seoul-based artist Choi Jeong Hwa provides visitors a gilded throne on which to sit and become part of the work, which the artist hopes will come to life through social media.

“The mirrors reflect an object, turning it into another object entirely,” Jeong Hwa said. “Countable beings become infinite. In that sense, it becomes art when you put it on Instagram; your photos become my art.”

Social media will undoubtedly bring massive attention to the exhibition, which is already arousing interest due to Jeong Hwa’s “Breathing Flower” placed outside the museum’s Huntington Avenue entrance. On April 7, another of his works, “Fruit Tree” will be placed in Marketplace Center near Faneuil Hall.

To tackle the task of presenting installations which combine art and cultural information, the Museum of Fine Arts enlisted the help of Northeastern University’s Information Design and Data Visualization graduate program to create a mural for the outside of one of the exhibitions’ galleries.

“They’re experts in knowing where to find good data so they mined for that data and came up with a big population chart and labels for each city that give you information and allow you to compare the cities,” Laura Weinstein, Ananda Coomaraswamy curator of South Asian and Islamic art, said. “Something they taught us was that when you find out information on any given city or place, it really becomes meaningful when you start to compare, since these numbers are relative. They really figured out how to compare all the cities without overwhelming you.”

The chart is visible only after walking through the exhibition’s main gallery, a conscious decision made by the curators so as to not influence visitors’ reactions to the works before seeing them.

“Whatever we present first has to be very brief and to-the-point so you can have it in your mind before you look at the art,” Weinstein said. “We figured people would look at the art and then be ready to ponder the cities in more depth.”

“Megacities Asia” will be on display at the Museum of Fine Arts from April 3 to July 17.