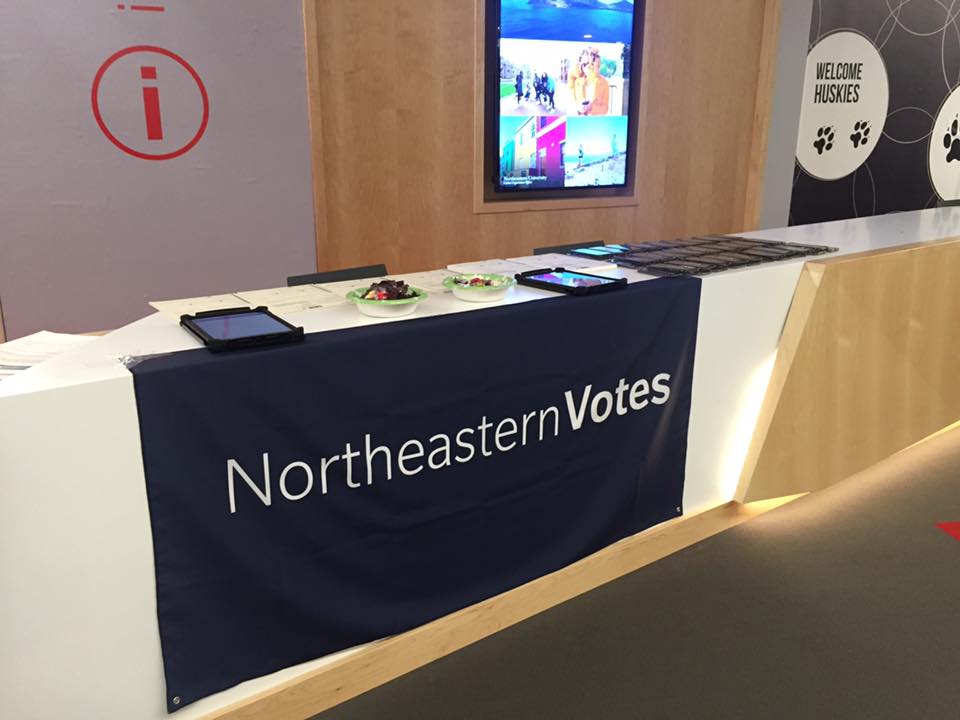 Overcoming widespread beliefs that American millennials have no wish to be politically engaged, the Northeastern University (NU) Student Government Association (SGA) and 16 other campus organizations have launched a nonpartisan effort called Northeastern Votes. The movement, which started just before the first day of fall classes, is focused on democratic participation and voter registration.

SGA President Elliot Horen, a junior pursuing a combined major in information science and business, is one of the masterminds behind the coalition.

“Millennials in general don’t participate in elections, which kind of feeds our future to an older generation,” Horen said. Less than half of all 18-to-24-year-olds in the 2012 presidential election voted, according to the Pew Research Center.

Horen said that Northeastern Votes started with a goal of “80 by 20” – registering 80 percent of the students on campus to vote by 2020. The organization started a website using the application TurboVote, which allows it to track the number of people registering online and signing up for election updates. Northeastern Votes is reaching students largely through tabling and social media campaigns.

In addition to SGA and 16 other campus organizations, Northeastern Votes is partnered with six university offices. For example, NU Dining is hosting giveaways and decorating cupcakes with politically-themed icing, the Office of Community Service and Affairs is sponsoring a debate-watching party Monday in Blackman Auditorium and the Office of Academic and Student Affairs is contributing money to sponsor the election watch party on election night in November.

“Generation Citizen is really about getting younger generations – current generations – of people active and engaged with the government,” Curran said. “We believe that the best way to make the country work and flow is to have everyone understand what it means to be an active citizen.”

For Curran, being an active citizen begins with a simple but crucial action: Voting.

“Registering to vote – we take that as a huge step, the biggest way your voice is heard is through elections,” Curran said. “Not just the presidential, but through local and state. We think it’s a good introduction to a lot of people who maybe didn’t have formal civics education. It’s a great way to get them informed about multiple issues besides just the presidential election.”

Kayla O’Neill, a senior business and international affairs major, is the co-vice president of community and social impact for the Northeastern University Marketing Association (NUMA). NUMA is another organization behind Northeastern Votes.

“One of our major campaigns is the #WhyIVote campaign, reaching out to share why [the students] themselves vote,” O’Neill said. “So one of the most important things there is just getting a diverse group for opinions [and] backgrounds and getting voices from throughout the university so people can see stories they resonate with.”

#WhyIVote has been based largely on the Northeastern Votes Facebook page. There, photos of Northeastern students’ faces dot the feed, each overlaid by a #WhyIVote filter and accompanied by a quote from the photographed student.

According to the Pew Research Center, the turnout rate among 18-to-24-year olds fell from 48.5 percent in 2008 to to 41.2 percent in 2012. For O’Neill, Northeastern Votes provided an opportunity to change that graph’s direction.

“We can reach out to this population, reach somewhere inside of them, so they themselves to go the polls after educating themselves on the issues and getting registered,” O’Neill said. “We have the three steps of registering, educating, then finally getting out to the polls.”

Fourth-year chemical engineering major Quincy Cundiff-Kopplin was glad to be afforded the opportunity to volunteer by tabling for Northeastern Votes on campus.

“I wanted to do something involving the election, and I was excited that it was nonpartisan because I’m shy about talking about my views and political parties,” Cundiff-Kopplin said. “A lot of people came up with questions. It’s cool because it makes it easy for people to search for information. It reminds them to do it. Most would forget to ask the question, but having the table here reminded them that they have to ask it.”

One of those people who approached the table was Caitlyn Valerio. A third-year pharmacy major, she believed in the importance of civic engagement for young voters.

“We’re at that age where we have the right to vote and be a part of America,” Valerio said. “For college students, this is their first election. We can learn about politics; we actually have the option to vote.”

Jerome McKeever, a third-year marketing and finance major, agreed with Valerio’s sentiment. He said the booth was an active component in his registration.

“It’s kind of like, ‘Oh, I can do this now. I can vote now,’” McKeever said. “I feel like it’s not going to be that close. I don’t see how Trump can even be president. I know the polls say they’re tied, but I don’t believe them. I probably wouldn’t have registered to vote if this booth weren’t here. I was on the fence, and I just said, ‘Why not?’”

Students like McKeever are exactly the type of people Northeastern Votes aims to reach. For Horen, engagement is all the initiative could hope to accomplish.

“There was this student who said, ‘I hate politics. That’s why I vote,’” Horen said. “I really appreciated that perspective, because we really believe that engagement is the antidote; it’s the cure. When faced with an unpopular candidate or an unpopular policy, I think the answer is not withdrawal but deeper engagement. And the easiest lever we have to make change in Washington is the vote. If we want to change it, this is our power to do so.”

Current editor-in-chief of The Huntington News Sam Haas was on the Generation Citizen Northeastern executive board between January 2015 and April 2016.

Jasmine Wu contributed to this report.

Correction: A previous version of this article referred to Elliot Horen as a senior.