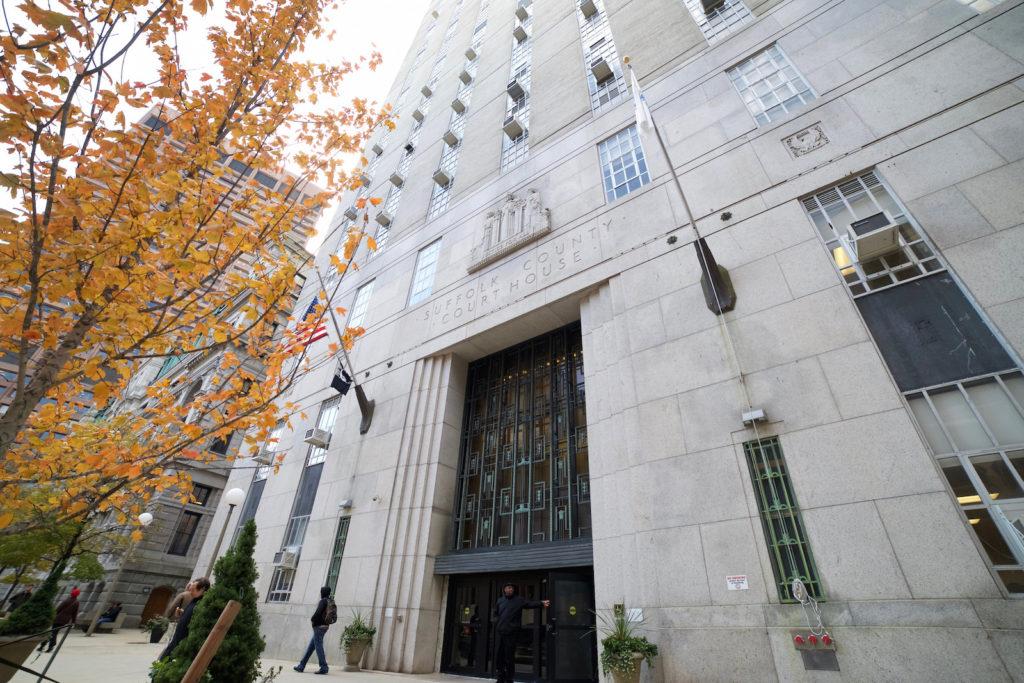 TRIGGER WARNING: This story contains material which may be upsetting or harmful to survivors of sexual violence.

A Northeastern student is suing the university and several administrators and staff members, alleging that the school mishandled her 2013 sexual assault case and has misrepresented violent crime on campus.

Morgan Helfman, a junior political science and sociology major, claims that the university mishandled the campus proceedings that found a fellow student not responsible for allegedly raping her, according to court documents. Helfman, who gave The News permission to use her name, chose to handle her case through the Office of Student Conduct and Conflict Resolution (OSCCR), which allows for an internal Student Conduct Board hearing and decision.

The lawsuit, filed on Monday, Oct. 31, seeks damages and attorney’s fees on the grounds of negligence, breach of contract, intentional infliction of emotional distress, negligent infliction of emotional distress, misrepresentation, violation of the Massachusetts Equal Rights Act and violation of Title IX. Title IX is a federal law that prohibits discrimination on the basis of sex in federally funded educational programs. Helfman is seeking a trial by jury.

“I think the school didn’t see me as a student anymore after this happened, and I think students don’t report because of that,” Helfman said in an interview with The News. “And [students] deserve so much more.”

Reached by phone on Tuesday afternoon, Northeastern Director of Communications Matthew McDonald said the university had not received the lawsuit and could not comment on it yet.

In her complaint, Helfman leveled more general charges against Northeastern for engaging in deceptive acts and misrepresentations concerning the extent and nature of violent crime on campus. The suit alleges that in addition to mishandling Helfman’s case, Northeastern knew or should have known that it “was not accurately reporting crime at NU and was falsely misrepresenting the extent of crime at NU to students, prospective students and their parents.”

“[Northeastern] had a number of different responsibilities to Morgan [Helfman],” Itzkowitz, who has a civil litigation practice in Boston, said in an interview with The News. “They have an obligation to provide a safe environment; they have a responsibility to provide safe housing [and] safe premises and to protect against foreseeable experiences. Northeastern knows from experience running a university that there are dangers prevalent on college campuses, and the measures that were taken were inadequate.”

The lawsuit alleges that three years ago, Helfman and a male classmate drank alcohol together in International Village (IV) before accompanying several other students to a Halloween party. Helfman and her classmate were both freshmen at the time. The party was hosted by a Northeastern resident assistant (RA) at 97 St. Stephen St., a leased property operated by the university. At the party, Helfman consumed alcohol in the room of an RA who was on duty that night, according to the suit.

The News reached out to the RA, who declined to comment at this time.

According to the suit, during the party, Helfman vomited due to alcohol consumption. Two female students attending the party said they would escort her home, at which point the male student she arrived with said he would take her back to IV, where they both resided, the lawsuit alleges. On the walk to IV, the student acquired Helfman’s Husky ID and signed them both into the building.

The suit alleges that once past the proctor station, the man did not take Helfman to her room, but instead to his own, where he allegedly sexually assaulted and raped her over the course of several hours.

The News reached out to the alleged assailant, who declined to comment at this time.

On Nov. 2, 2013, Helfman, accompanied by her mother, reported the incident to Northeastern University Police Department (NUPD), the lawsuit alleges. NUPD then commenced an investigation, began collecting evidence and escorted Helfman to Beth Israel Deaconess Medical Center for emergency care, according to court documents.

According to the suit, an OSCCR Student Conduct Board found the alleged assailant “not responsible” for violating the CSC.

Helfman appealed her case on the grounds of a procedural error by the Student Conduct Board and “newly discovered information” pertinent to the case, the lawsuit alleges. On Dec. 4, 2013, Wegmann notified her that the appeal could proceed on the grounds of the error, although not on the basis of the new information. According to the suit, on Jan. 8, 2014, two days before a rescheduled hearing, Estabrook overturned Wegmann’s decision, saying that the grounds of Helfman’s appeal had not been sufficiently stated and that she would have to refile her complaint.

Wegmann is no longer employed by the university and did not return request for comment.

Jose, the associate dean, and Sanders, the residence director, did not return phone calls and emails from The News.

To better prepare her appeal, Helfman sought to review an audio recording of the hearing, according to the lawsuit, but was told it had been destroyed.

Helfman resubmitted her appeal, according to the lawsuit. On Feb. 7, 2014, Sevigny notified the plaintiff that her appeal would be granted on the grounds of newly discovered information—namely, the results of the rape kit serology investigation prepared for NUPD by the Boston Police Department (BPD) Crime Laboratory.

According to the suit, the appeal would not have been granted based on procedural error, “a matter which could no longer be properly reviewed due to the defendants’ spoliation of the audio recording of the proceedings.”

Sevigny did not return a phone call made to OSCCR requesting comment.

On Feb. 25, 2014, Helfman was notified that the Student Conduct Board had found the alleged perpetrator not responsible following the appeal, according to the lawsuit.

The lawsuit alleges that although Helfman requested accommodations from Northeastern, the university refused to transfer the male student from his assigned residence, transfer him from classes they shared or expel him from the school.

According to the suit, Helfman was allowed a no-contact order, but she still crossed paths with her alleged assailant several times on campus.

According to Northeastern’s 2013-14 safety, security and fire safety information report, as an alleged student victim of sexual assault, Helfman had the rights to counseling and mental health services, relocation to a different residence facility and reasonably available changes to her class schedule.

The lawsuit includes information taken from Northeastern’s crime reports, which say that there were “approximately two to 14 rapes per year between the years 2010 and 2015,” and contrasts them with statistics from the December 2015 sexual assault campus climate survey, which was conducted by the Office of Student Affairs. The results revealed that 3.62 percent of respondents said they had been sexually penetrated without their consent during their time at Northeastern. This would amount to over 700 students, according to previous News analysis using U.S. News and World Report enrollment statistics.

According to court documents, as a federally funded educational institution, Northeastern is “legally obligated by Title IX to respond promptly and effectively to reports of sexual violence and to take immediate action to eliminate acts of sexual violence, prevent their recurrence and address their effects.”

The university is also required by federal law to adopt and implement a Title IX policy. Additionally, it must appoint a Title IX coordinator. The lawsuit alleges that neither was in place at the time of the alleged rape and sexual assault of the plaintiff.

According to the 2012-13 and 2013-14 editions of Northeastern’s annual safety, security and fire safety report, though, Mary Ann Phillips was the Title IX coordinator at the time of Helfman’s case.

The plaintiff has sued all six defendants on counts of negligence, according to the lawsuit. Additionally, Helfman alleges a breach of contract by Northeastern University and violations of Title IX. The plaintiff has also sued on the grounds of intentional infliction of emotional distress, negligent infliction of emotional distress and violation of the Massachusetts Equal Rights Act by all defendants. Finally, Helfman alleges a misrepresentation by defendant Northeastern University pertaining to violent crime on campus, according to court documents.

In 2014, Helfman became the vice president of student affairs in Northeastern’s Student Government Association (SGA). There, she led a subcommittee concerning sexual assault on campus. She was also chair of the Student OSCCR Assessment Committee (SOAC) in April 2015. The committee performs a comprehensive review of the CSC every three years.

The recommended changes to guidelines on handling sex crimes first appeared in the 2015-16 edition of the CSC.

During the 2015-16 school year, Helfman served as the executive vice president of SGA.

Multiple student groups on campus, including the Sexual Assault Response Coalition (SARC) and SGA, have been working to reform OSCCR’s Student Conduct Board process for cases pertaining to sex crimes, The News previously reported.

“Most schools are moving away from including students on any type of hearing board, and even just in general, I think schools are looking much more toward an independent fact finder to do the investigation, possibly make some recommendations and then give it to one or two administrators or trained faculty to follow up,” DeCandia said. “You want people who have received not just an hour or two of training, but more extensive training.”

Both at the time of Helfman’s trial and now, OSCCR has used Student Conduct Boards to decide all on-campus cases.

“I understand the idea of being judged by a jury of your peers, but that would make it a court of law, which it is not,” Helfman said. “You can’t have it both ways. A kangaroo court is basically what it is.”

According to DeCandia, student conduct hearings are not meant to represent a legal court, but rather an internal process that eases the burden on all parties involved.

“It’s not like a court of law, and it really shouldn’t be,” DeCandia said. “The point for the on-campus process is to allow students who have experienced sexual violence to remain active in their education, to file a complaint where they feel it’s appropriate, to feel safe on campus [and] to continue to engage in their academic and extracurricular activities, whatever that may be. […] A student who’s going through the process on campus shouldn’t feel like they have to report to the police or go through the criminal justice system at the same time.”

Helfman and her attorneys hope the lawsuit will change Northeastern’s procedures to prevent future students from having similar experiences.

“The goal of this is to make life better for students on campus so no one else has to go through what Morgan [Helfman] went through,” Itzkowitz said.

Confidential resources* for survivors of sexual assault, courtesy of SARC:

Other (non-confidential) resources for survivors of sexual assault: