Spiritual advisor guides NU community in art of being 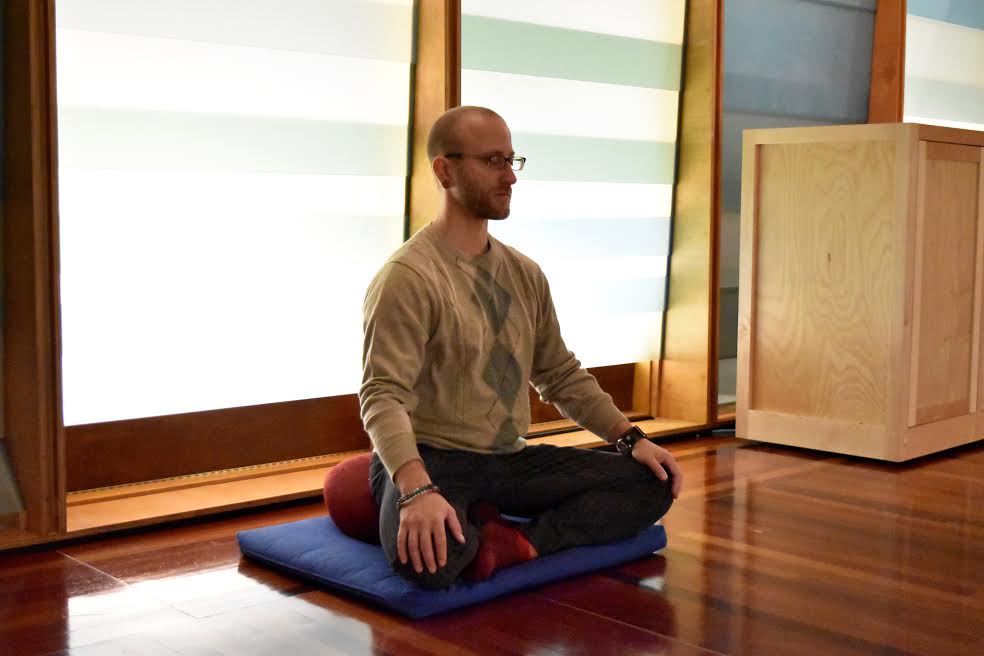 Since Blum became Northeastern’s Buddhist spiritual advisor and mindfulness program director four years ago, the university’s sacred space in Ell Hall has become one of his teaching venues where he shares his expertise in meditation and spiritual practices.

Blum leads mindfulness programs on campus for students and faculty from a variety of groups and engages with students in one-on-one spiritual counseling.

As the leader of the NU Buddhist Group, Blum also leads weekly meetings called Dharma Dialogues. These gatherings take place in the sacred space on Tuesday evenings and include meditations, Buddhist readings, teachings and personal reflections.

“I love the students here and I think the way that I’ve most connected and appreciated the students is likely the Dharma Dialogue,” Blum said. “At these meetings we have these precious conversations where students really are opening up and they’re sincerely curious.”

With rainbow beads on his wrist and wood-colored gauges in his ears, Blum sat in silence on a round meditation cushion before one of these meetings. An aura of serenity flowed through his words and movements as he led the 19 students who joined him in the circle. White statues of the Buddha and the Kwan Yin, a female incarnation of the Buddha symbolizing mercy, sat in the circle’s center.

During one portion of the meeting, Blum asked those present to share an image or situation that fills them with wonder. Students’ answers ranged from descriptions of dewy mornings in nature and New York City subway stations to accounts of working on science experiments and listening to spoken word poetry.

Blum also opened the floor for students to make the meeting’s open and closing remarks, joking that he would pick a member to do an interpretive dance if no one volunteered. One student opted to do the dance.

“[Blum] is a strong leader while also not being overpowering,” said Madi Durr, a third-year nursing major and vice president and scheduling coordinator of the NU Buddhist Group. “He kind of gives us room to lead where we want and really provides a lot of guidance without making anybody feel like anything needs to be done in any specific way.”

Burr said that she admires the sincerity of Blum’s interactions with students as well.

“He really listens when you’re talking to him and he asks about you and how you’re doing,” she said. “He’s very meaningful in the way he goes about the conversation. He’s always completely interested in whatever you have to say.”

Students do not have to be Buddhist to participate in the NU Buddhist group’s activities, Blum said. In fact, he said that more than half of the group’s members are not Buddhists.

“Buddhism is our jumping off point, some little nugget of the teaching, yet it really focuses on what it’s like to be us,” he said. “It’s not about ‘how do we become a Buddhist?”

Raised in Beacon Hill in the Jewish faith, Blum said he discovered Buddhism in a world religions class his senior year of high school. After taking some courses on Buddhism during his undergraduate studies, he went on to pursue a master of divinity degree focused on Buddhist ministry from Harvard Divinity School. He currently practices Buddhism and has been meditating for 17 years, which he says has benefited him personally.

“Buddhism put out the welcome mat that I needed,” Blum said.

While Blum was a student at Harvard Divinity School, he interned with Alexander Kern, the executive director of Northeastern’s Center for Spirituality, Dialogue and Service at an interfaith program.

Kern said that he and Blum begin all of their meetings with a moment of silence, which he believes is an important tool for mindfulness.

“For me as a Quaker and for him as a Buddhist, silence is a language that we share as a way of becoming mindful,” he said. “When he comes out of silence he has this sort of delightful, awakened, effervescent sort of look as if he’s just been spiritually refreshed from breathing deeply and being in silence.”

Kern also said that although he is Blum’s supervisor and colleague, he also considers him a friend and brother. He said Blum has profoundly impacted both his life and the lives of students.

“I would describe Harrison [Blum] professionally as a consummate, gifted, committed spiritual life professional – a person of great compassion and wisdom and care for students and for colleagues alike,” Kern said. “He is also someone who is concerned for what you might call socially engaged Buddhism or the way that the practice […] translates and interconnects with the practice of building what I would call a more just, peaceful and sustainable world.”

Blum has worked to share Buddhism’s elements of mindfulness and meditation to those in need of those tools through several programs.

“There’s a big conversation happening in this country and in others about race and class and access to Buddhist teachings,” he said.

For two summers, Blum ran a free mindfulness training series at a community center in Cambridge serving low-income community members. He said the program included free childcare and dinners to make it accessible.

A lover of creative movement, Blum also runs mindfulness dance programs and has published a book on the subject this year, titled “Dancing with Dharma: Essays on Movement and Dance in Western Buddhism.”

Additionally, he does mindfulness training with adolescents in an acute psychiatric unit at Franciscan Children’s Hospital.

In the past, Blum has worked with end of life spiritual training and counseling, which he said was one of the most challenging yet rewarding tasks he has undertaken as a spiritual professional.

Paul Turcott, a graduate student studying bioengineering, said he has positively benefited from participating in the NU Buddhist Group’s Dharma Dialogues and from Blum’s leadership.

“[Blum] is a really cool guy, very relaxed […] And he does a good job of fostering discussion,” Turcott said. “His guided meditations are awesome. He’s just super approachable. Come try the group out if you feel like you need a place to develop yourself or learn about Buddhism.”

Blum said that his work as a spiritual professional has led him to develop a personal relationship with his meditation practice.

“It’s not just a mental health practice that reduces stress. I would say it’s also kind of devotional for me and it is so because it feels like a way of honoring the wonder that I have toward being alive,” Blum said. “I think the beauty of the practice has become more clear to me over the years that it’s this time to be more than do. To be a human being rather than a human doing.”