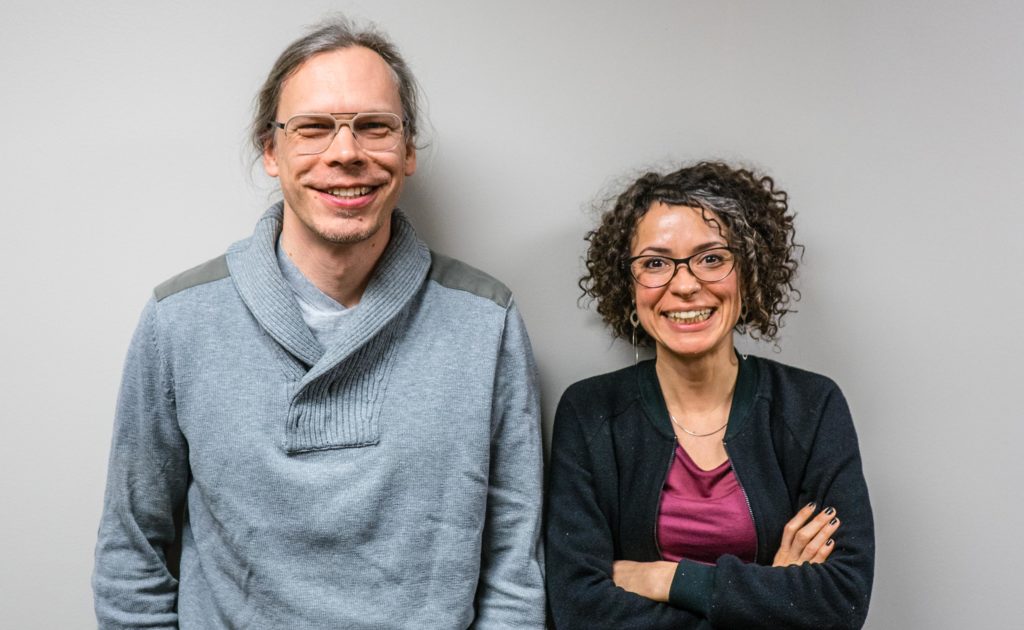 Thousands of posters adorning phrases such as “Girls just want to have fun-damental rights” and “Our rights are not up for grabs” leaned against fences in the Boston Common on Jan. 21 after more than 175,000 protesters came together for the Boston Women’s March for America to support women and other marginalized groups.

When they saw this collection, three Northeastern professors decided to gather the posters as an archive so that they can be studied and the day’s history can be preserved. The professors, led by professor of design Nathan Felde, rented a vehicle and loaded it with as many of the signs as they could salvage.

The Huntington News spoke with two of the professors: Alessandra Renzi, an assistant professor in emergent media for the program in media and screen studies, and Dietmar Offenhuber, assistant professor of art and design and public policy, to ask them about their experience collecting the signs and why they chose to do so.

Huntington News: Describe the moments leading up to the collection of the protest posters and signs that were left behind after the Women’s March.

Dietmar Offenhuber: The three of us met during the day at the march where we pretty much stayed for the whole day because when you actually made it to the Boston Common, there was no real way of leaving it before 2 p.m. because it was so packed. At that point, we were getting hungry so we got lunch in Chinatown. When we came back, we saw those signs already arranged on the fence. It struck us as an accidental archive, the arrangement did. For me, it was a very aesthetic experience seeing this because there were so many different voices and so many different images. The idea quickly came up that this has to be preserved.

Alessandra Renzi: Yeah, it was also getting dark so people were still taking pictures, and it had a very surreal aura. We asked the park and recreation people what they were going to do with the signs and they said they were going to throw them into the garbage. So then Nathan Felde [the professor who first suggested collecting the signs] went to go grab a truck. When he came back, we started packing the signs and as soon as we started removing them, people started to ask us what we were going to do with them. We told them that we wanted to preserve them. Lots of people then started helping us because they were happy that the signs weren’t going to land in the dumpsters.

HN: I heard that you guys collected upwards of 1,000 signs. How long did it take to collect all of posters?

DO: I think we started somewhere around 6:30 p.m. and we finished shortly after 9 p.m. It was actually pretty quick. I didn’t think that it was going to be so quickly finished.

AR: There were probably 20 people at one point helping us. When we offloaded them in the storage locker, it took the five of us five hours to get them off the truck and put them in boxes.

HN: Going back to what you said earlier, that it was a surreal and aesthetic experience, what did you feel like the signs and posters captured about that event?

DO: I expected much more standardized, pre-fabricated and printed signs but pretty much every sign was unique both in terms of the way that it was made and design choice as well as the slogans. There was this improvisational aspect behind the signs that you only see when you see all of the signs. One individual sign might be clever, might be beautiful, but you don’t understand the big picture.

HN: Were there any signs that stood out to you guys the most?

DO: Not really. As soon as we started collecting the signs, it became mechanical and I didn’t really notice. Sometimes you would take a break, look at the signs and think, ‘Oh this is interesting,’ but you would continue and forget about it. For me, it was just the whole variety of signs.

AR: For me, the variety for sure was the same for me. More than the signs themselves, there were genres of signs. There were signs that played off of popular culture. There were signs about diversity, the power of women, environmentalism and these intersections that you get now that you wouldn’t have gotten in a march in the 1970s where it was just women’s rights. That’s what I liked about them.

DO: It’s definitely a cultural moment when you have 170,000 people coming together and they’re all speaking with different voices. Those signs are a testimony of those moments. This was truly a grassroots movement with people coming with their own voices. In that sense, it’s a cultural memory that is evidence of a specific event. I would have done the same if those would have all been Trump supporters because it is an expression that needs to be preserved in some way.

AR: It’s a cultural memory in the sense that it’s also a political memory. And so, political moments are parts of our culture. It tells us that people are in the streets again. This is something for a long time that wasn’t happening that much. It’s important and interesting to preserve those artifacts that speak to a renewed interest in being on the streets to make a statement.

HN: Let’s shift to the archives. Did you guys already have this archive plan in mind when you guys began picking up the signs? How did the idea of the archive come together?

AR: It was an archive already when we found it. The question wasn’t so much ‘Is it going to be an archive?’ but ‘Where are we going to put it?’ We basically just rented the van and we were asking Nathan [Felde] what we were going to do with all this stuff, and he just said, ‘We’ll think about it later.’

DO: It was really one step at a time

AR: I did mention to [Nathan Felde] that we have a really nice archive at Snell Library that covers social movements and I take my students there. Ten seconds later, Nathan [Felde] had already started contacting people. By the time I got home, there were at least 10 people telling me that this was great and that they were interested.

HN: Is this going to be a physical or a digital archive? What specifically are the plans for the archive itself?

HN: I read that the intention behind the collection of these signs was for them to be studied. What impact will studying these signs have?

DO: Just from an information science perspective, creating a good protest sign is a very tricky thing. It’s very difficult: Find a catchy slogan, putting it into visual form, and so from this visual language and communication design perspective, it’s very interesting to study especially because of its historic context. There are a lot of things that you can see in these artifacts.

AR: I study social movements and media so they’re also interesting as documents of claims made by people who participated in the protests. There is both an aesthetic component, a practical sign holding component as you were not allowed to bring sticks, and then there’s the historical part of what are the desires and the voices of the people of this march. It’s not that they’re trying to get rid of the president. We can’t do that. It’s an assertion of, ‘Hey these are the things we care about.’ By looking at these signs, especially altogether, you get a good sense of what people care about. That means anything from the environment, children, education, health care, women’s rights, immigration, religion, all these things.

HN: Is there anything else that you’d like to add about the archives?

AR: The only thing I’d like to add is that we are not the only ones who are collecting signs. There are concerted efforts by others. I was just talking to someone that they were at a march in Philadelphia and there were people who were collecting the signs to archive them. I think Harvard University is also collecting 60 signs. They’re going for a sample. There are online resources now where people are posting the signs. People all over the country are actually trying to collect these signs.

HN: Are any schools working with Northeastern to build a large, shared archive?

DO: Those are exactly the things that we are figuring out right now. What we’re trying is to preserve the particular context from which these signs have emerged from, but then also connect it to other initiatives. This is something that has to be planned.