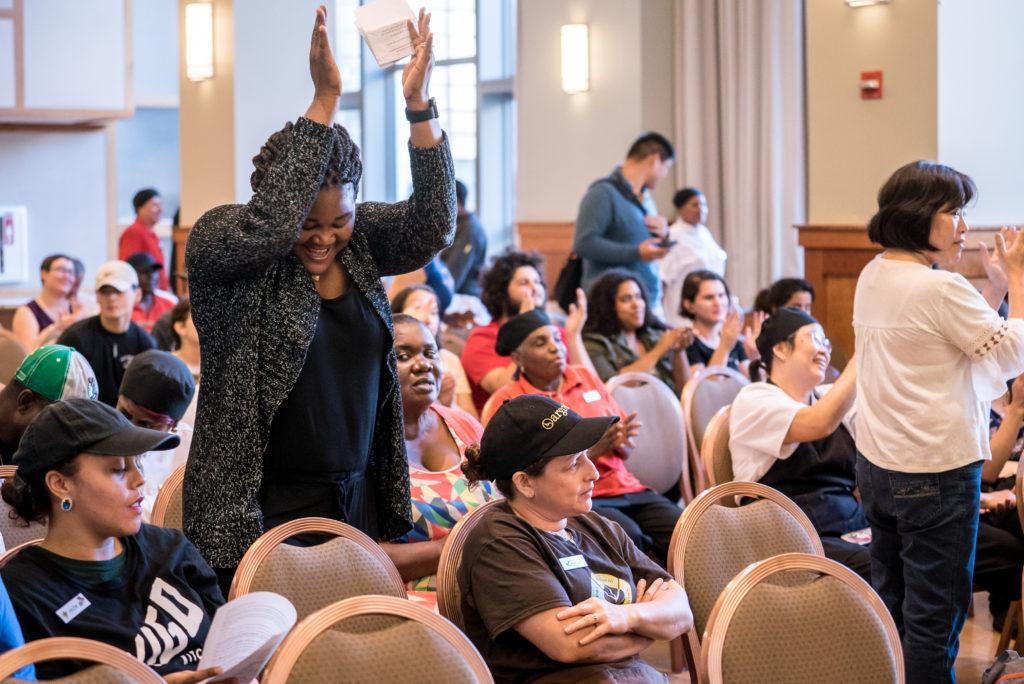 Workers voted 316 to 2 on Thursday to strike if the demands for a new contract were not met by Tuesday at 11:59 p.m. UNITE HERE Local 26, the union representing Northeastern’s dining services workers, announced the new tentative agreement Monday.

“I think from the very beginning this campaign has always been about respect for campus dining hall workers who have been forgotten even though they serve on university campuses every single day,” Local 26 spokesperson Tiffany Ten Eyck said. “Our union wants to be part of solutions in raising standards for dining hall workers and making sure that dining hall workers are some of the more respected people on campus.”

Dining service workers, Local 26 members and members of Huskies Organizing with Labor — a student coalition which has worked to support dining workers — celebrated together in the Curry Student Center on Tuesday, hailing the new five-year Chartwells contract as a victory for worker rights. The new contract addresses each of dining workers’ core demands, including an increase in wages, adequate health care benefits and the establishment of a pension plan.

Chartwells is now required to create as many full-time schedules as possible, while gradually increasing the wages so that full-time workers make $35,000 per year by 2019. The contract guarantees Chartwells will increase wages by $5.65 an hour across the board.

The agreement also prevents Chartwells from revoking the dining service workers’ current health benefits, while creating an additional, more affordable health insurance option in which Chartwells must cover 97 percent of monthly premiums. The contract also initiates the establishment of a pension plan: In the fourth year of the contract, Chartwells must pay into the Local 26 Defined Benefits Pension Plan.

“This is a big step forward for all of us,” Northeastern food service worker Natael Rojas said. “We’re all going down from no respect to a little bit of respect, you know? And a little bit of money always helps. It helps take care of everything we need for our kids. It’s kind of tough out here.”

The resolution not only improved explicit benefits, but also strengthened the language defending the dignity of dining service workers. Protections from discrimination on the basis of immigration status and gender identity and expression were specifically enhanced in the new contract. Furthermore, flexibility on the allotment and use of personal days was expanded: On days that state offices are closed due to dangerous weather conditions, dining workers will be allowed to use vacation or personal days to stay home from work without punishment. Workers who come into work on such days will earn time-and-a-half pay.

Northeastern spokesperson Matthew McDonald said the school commended Chartwells and Local 26 for finding a solution before the strike began.

“We commend the parties involved — the union and our food service vendor, Chartwells — for working over the weekend to reach an amicable agreement for Chartwells employees,” McDonald said. “We are pleased that members of the Northeastern community, particularly our students, will not experience any disruption in dining hall service.”

Last year, Local 26 represented Harvard University dining hall workers in a similar effort to win a strengthened contract. However, the Harvard dining workers went on a 22 day strike before a new agreement with increased wages and health benefits was reached. Northeastern dining workers and Local 26 leaders have long-since invoked the Harvard strike as a precedent for contract improvements. Now, Northeastern dining workers hope to set a similar precedent for contract negotiations to come.