Cayden Primeau: From a family of forwards to a life between the pipes 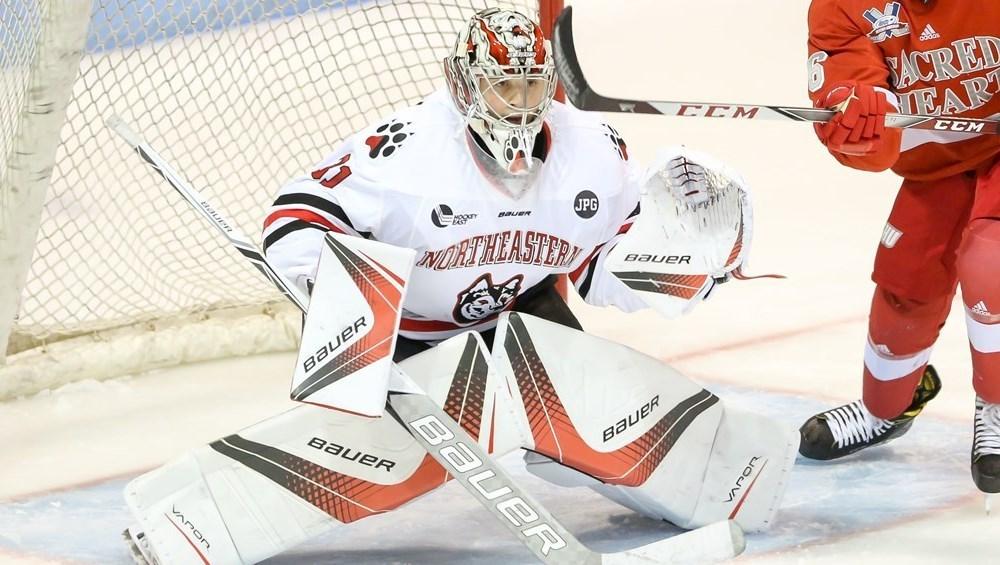 As the son of former Philadelphia Flyers captain Keith Primeau and nephew of 15-year NHL player Wayne Primeau, it was no surprise when Cayden Primeau expressed his love for the game at a young age. With two NHL centers in the family and two older brothers, Chayse and Corey also playing forward, it was atypical when the youngest Primeau opted to tend the net rather than shoot on it.

“My dad never really wanted me to be a goalie,” Primeau said. “It took some persistence trying to get into the net to begin with, but then once I went in net I fell in love with it.”

Primeau took advantage of having older brothers and proved his skill at a young age by routinely playing with older kids. While most of his net-minding training came from goalie coaches over the years, Primeau still learned the basics from his dad and uncle.

“[They taught me] the little things, like how to carry myself off the ice and what made them so successful,” Primeau said.

Growing up in Voorhees, New Jersey, the youngest Primeau had many successful seasons on the ice preceding his first game with Northeastern.

He played for the Philadelphia Revolution, a Tier III Junior A team in the Eastern Hockey League, and followed that season with a year in the United States Hockey League, or USHL, playing for the Lincoln Stars.

Primeau came out the other side of his first USHL season with 14 victories, the third most among first-year USHL goaltenders, 3.16 goals against average and a save percentage of .895.

Primeau was a member of the 2016 U.S. Junior Select Team, who won the gold medal in the World Junior A Challenge. In the tournament, Primeau notched three wins with Team USA and was named to the 2016 World Junior A Challenge All-Star team. Primeau’s stats for the tournament topped that of his USHL season, averaging less than a goal a game, and finishing with a .966 save percentage.

“I want to play in the NHL one day, so it definitely motivates me,” Primeau said.

Having committed to Northeastern a few years ago, Primeau has been itching to get on the ice with the Huskies for a while now. Primeau believes his season with the USHL sufficiently prepared him to play at the collegiate level and pace, but actually being on the ice with the teams of Hockey East is “definitely stepped up.”

His first game appearance with the Huskies was during an exhibition match against the Prince Edward Island University Panthers. The game resulted in a 9-1 flattening of the Panthers, during which Primeau saw a full period of play and stopped the 10 shots he saw.

Standing at 6 feet 4 inches, Primeau is capable of covering nearly the entire net with this lateral lower body movements. Quick legs are his strong suit, something he displayed in the game against Prince Edward Island and his first full game performance.

That performance came during the second regular season game Oct. 7 at Matthews Arena against Sacred Heart. Primeau saw three full periods of playing time, shutting down each of the 18 goal attempts by the visitors, earning his first shutout of his college career.

“I was happy to finally start playing,” Primeau said. “There’s a lot of anticipation going into the year so I was happy to get started.”

“I thought he made some real good lower body saves with his legs,” Madigan said.

Primeau, faced with a breakaway halfway through the first frame, utilized his size and strong legwork to shut down the attempt, allowing the Huskies to keep Sacred Heart at bay throughout the game.

“He played with some poise and composure for a freshman, especially in his first game,” Madigan said.

Primeau attributes his first game preparedness to time spent training with team members and preparing for the season together.

“Being able to get shot on by [Dylan] Sikura, [Adam] Gaudette and [Nolan] Stevens every day, guys like that with hard shots just know how to place it,” Primeau said. “Their skills and talent definitely has helped me in the past month or so.”

“I try to watch [Ruck] and Theut and try to learn how they handle themselves on and off the ice, what they do, to try and improve and get better” Primeau said. “They treat me like a Northeastern goalie.”

Primeau is currently a draft prospect for the NHL’s Montreal Canadiens, pick #199 in the 2017 NHL entry draft. But before he heads off to the pros, Primeau plans on spending a few more seasons refining his game on Huntington Avenue.

“This season, I try to make sure I give the team the best opportunity to win if I’m the guy in the net, and when I’m not the guy in the net, I just try to help motivate and be whoever’s in the net’s biggest cheerleader,” Primeau said. “I love Northeastern and I was really excited and finally being here is amazing.”