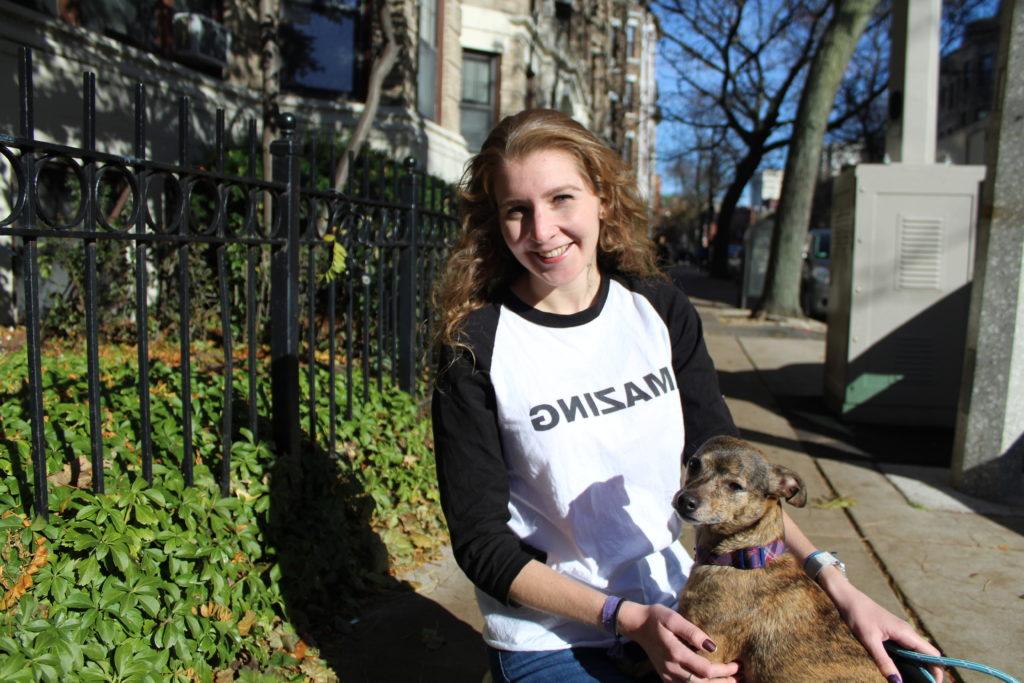 One morning early this spring, Jenna Malley received a text from a friend saying “I don’t feel that great this morning. I can’t remember how amazing I am.” Malley asked her why, but another message was already on the way: “Nevermind, I looked in the mirror and now I feel fine.”

The sentiment resonated with Malley, who at the time was searching for a way to honor her best friend Kennedy Clifford, who died by suicide in 2014. This text conversation spurred the fifth-year Northeastern accelerated master’s student into action. She reached out to Jacklyn Oleksak, a fourth-year student at Stonehill College who had been close friends with Clifford, and the AMAZING Campaign was born.

Through the campaign, which launched in March, Malley and Oleksak sell clothing and accessories with the word “AMAZING” written backward across them, so when people wear the items they can see the word in the mirror or in selfies. All profits from the sales are donated to the American Foundation for Suicide Prevention.

“The AMAZING Campaign is based off the idea that everyone deserves to see how amazing they are, physically see it in the mirror, be able to wake up and put on a shirt or a hat and look in the mirror and say ‘Okay, I’m amazing,” Malley said.

The campaign started small: Malley and Oleksak aimed to sell 11 t-shirts through Bonfire, a custom shirt sales company, in the weeks leading up to Clifford’s April 13 birthday so members of their local New Jersey community could wear them in tribute to Clifford. However, within the first 48 hours they sold more than 200 shirts.

The pair realized they had to move off the t-shirt starter website and created their own website in July. They expanded their inventory. As of November, the campaign has raised more than $4,000 through more than 500 orders to support suicide prevention efforts. The co-founders are now working with lawyers to turn the AMAZING Campaign into a recognized nonprofit.

Audrey Mayer, a 62-year-old social worker who has been a professional therapist for the past year, lives in the Westwood, New Jersey, community that Clifford was a part of. Her son was Clifford’s peer before her death.

“I was studying at the time and even noticed in graduate school suicide is not really addressed enough for mental health clinicians to learn how to treat head-on, how to vet, how to investigate,” Mayer said. “As a mother, when Kennedy killed herself, I resented it. I resented that it was on the menu — I hate that it’s on the menu for kids. But I can’t just go in denial … so we started talking about it more clinically and objectively in our own home.”

Mayer, who had a career in telegraphics and telecommunications before she went back to school to work in therapy, said she is enthusiastic about the AMAZING Campaign because of the way it pairs a strong aesthetic with a positive message.

“This is my Christmas gift this year, it’s been my birthday present for a few friends, I have some in the house for spontaneous gifts,” Mayer said. “I think it’s important. There’s a businesscard that Jenna [Malley] has … so I put them in with the t-shirt so when people get the t-shirt they understand why they got that gift.”

Malley said she wanted the campaign to be clothing-based so it would spark more conversations and raise awareness of mental illness and suicide prevention and to tell people struggling with mental illness that they are not alone.

“With the shirt idea, we’re also hoping that people will feel more comfortable talking about mental illness, because both of us who started the campaign are absolutely horrified by the stigma that surrounds mental illness,” Malley said. “We’ve heard so many stories of people wearing it and they love that they can actually open up and talk about it in a more comfortable, casual way because they’re not the one who brought it up. It’s a natural way to bring it into a conversation because it’s right there — it’s on your chest.”

Mayer said the campaign is already minimizing the taboo that surrounds mental illness and suicide in her community. After she gave one of her friends an AMAZING t-shirt, her friend opened up to Mayer about her struggle with her son’s mental illness, she said.

“The campaign has become a bridge for some people who need to talk about it who don’t know how to introduce it,” she said. “I don’t know how to introduce the idea of suicide prevention in a lot of conversations that aren’t with peers or colleagues, but are just with mothers in my neighborhood, and this is a way I’ve been able to do it. And the parents are wearing these proudly. And so are the kids.”

Though it is a lot of work to build up the campaign, Malley said if it makes one person think about Clifford or changes their views on mental illness, it is worth it.

“We didn’t feel like her passing should be the end for her,” Malley said. “We felt like the kindness and the generosity she’d always shown to every single person in her life deserved to be carried on.”

Kennedy Clifford’s sister, 25-year-old Connelly Clifford, tries to get the word out about the AMAZING Campaign in New York City where she works. When Malley and Oleksak first told her about the idea for the campaign, Clifford said she appreciated that her sister’s suicide inspired something positive.

“I grew up with my sister and watched her make such a positive influence on people’s lives,” Connelly Clifford said. “She would literally bring cookies into school on test days to make people feel better or an extra pair of socks to give to somebody during gym. Random little things like that, random acts of kindness  — we call them random acts of Kennedy.”

Clifford is returning to school at Salve Regina University in January to pursue a master’s degree in holistic counseling. There, she will look at ways to expand treatments for mental illness beyond medication and eventually teach others these same strategies as a professor or private practitioner. In the meantime, she hopes the AMAZING Campaign will continue to grow.

“There are so many amazing organizations out there: American Foundation for Suicide Prevention, Samaritans, they all have this general message that they’re there to listen to people and help people,” she said, “but I want something as well that can just help people smile or feel better, just know that they’re amazing if they’re looking in the mirror and wearing one of the t-shirts. I would really love if it became nonprofit, and even if it starts as a club on college campuses … we can just kind of branch this out all across the Northeast.”

Similarly, Mayer said the campaign should expand into high schools.

“It really needs to be in the high schools, like DARE [Drug Abuse Resistance Education] was,” Mayer said. “If you bring it in early enough, it’s successful, and I think the AMAZING Campaign can do it because it’s not all buzzkill. It’s innovative and it’s challenging and it’s getting in front of very serious problem and that’s what I like about it. It’s optimistic, and if we look at suicide as every other disorder or disease, it is early detection and diagnosis that is life preserving.”

After obtaining nonprofit status, Malley hopes to partner with high schools and colleges to do informational programming and advocacy, especially in Massachusetts and New Jersey. Malley said she would like to work with that age group as a part of AMAZING, specifically graduating seniors and college freshmen coming into schools without knowing their mental health options.

“Obviously we would love to just end suicide, but realistically that’s not feasible because although people like to say suicide is 100 percent preventable, we know that it’s not,” Malley said. “Our goal is really just to raise awareness of mental illness, raise awareness of suicide, especially among younger age groups so we can make them aware of the resources that are available to them and make sure they’re utilizing those resources.”