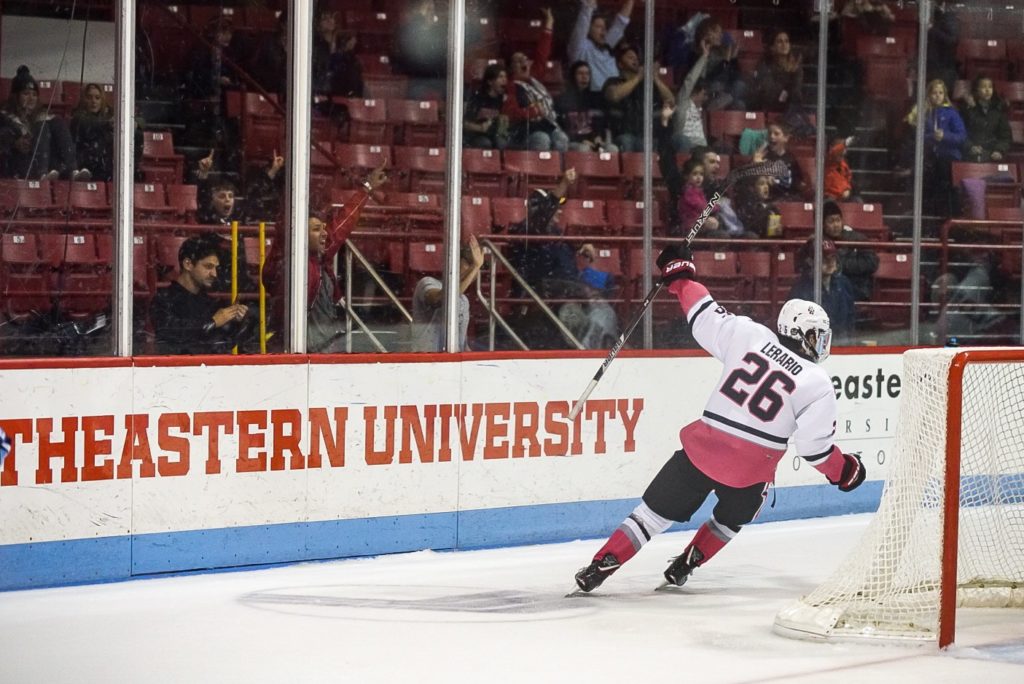 Building off of their successful start to the new year, Northeastern University men’s ice hockey pulled a weekend sweep over the University of Maine at Matthews Arena Friday and Saturday night.

“Every team’s a good team in this league, and to get four points and two wins was a big weekend for us,” head coach Jim Madigan said. “The club that we played is a hard-nosed, tough team to play and you have to earn your victory with them.”

Following a 3-3 draw in overtime at Bentley University Jan. 5, the Huskies earned the win Jan. 6 at home with a 6-1 bulldoze of the Bentley Falcons. This weekend’s sweep launches their streak to 7-0-2 and earns them the first place slot in Hockey East Standings.

“We have a quick team; when all four lines are going we’re pretty deadly. I think when we’re working like that, we’re just like a machine,” fourth-year forward Dylan Sikura said. “People are chasing us. We’re the top dogs right now so it’s going to get tough.”

Friday’s game at Matthews Arena included a fundraiser support the fight against breast cancer, called Northeastern’s Hockey East Skating Strides. The Huskies hung up their traditional white home game attire and instead donned pink jerseys in honor of the special occasion. The pink jerseys were sold in a silent auction throughout the night to benefit the cause.

An on-ice ceremonial puck drop featured Kim Madigan, wife of head coach Jim Madigan and breast cancer survivor, and Kathy Wynters, the Hockey East associate commissioner and director of the Skating Strides program.
Friday, 5-3, Matthews Arena
Early in Friday night’s contest, the Black Bears were hungry for a lead, but the game remained scoreless until about halfway through the period when UMaine first-year forward Eduards Tralmaks followed through on a teammate’s rebound shot to earn the visitors their first point. Northeastern challenged the play, but the call was upheld, putting the Huskies down 0-1.

The Huskies quickly matched the Black Bears with a point of their own, taking advantage of the power play. Third-year forward Adam Gaudette sent a rocket from inside the faceoff circle straight past first-year goaltender Jeremy Swayman to the back of the net.

The Huskies were hitting the net hard and scored another goal within three minutes. It was second-year forward Grant Jozefek who gave NU their third point of the game, lifting the puck right over Swayman’s pad.

Coming out of the locker rooms for the third period, UMaine scored their third goal of the game, bringing NU’s lead down to one. First-year Black Bears defenseman Brady Keeper’s shot hit the post at just the right angle for it to ricochet behind NU’s first-year goaltender Cayden Primeau.

The final period maintained a dangerously close game, with both teams playing across the neutral zone. The Huskies managed to clinch a two-point lead with 1:24 left in the game after Sikura’s 11th goal of the season. Sikura gained possession off the stick of second-year forward Biagio Lerario, headed into the zone alone and sent a backhand straight past Swayman to secure the 5-3 victory.

Madigan was pleased with the two-point victory over UMaine and the team’s performance on the ice.

“I thought Lerario’s line was really good, [with] Jozefek and Hawkins,” Madigan said. “Jozefek was out of a cannon today, he was really moving his feet and creating some opportunities. It was nice to see our second power-play unit get a goal. We got some O-zone play and possession time from all four lines, but I just think we can be a little bit better still.”


Saturday, 5-3, Matthews Arena
The teams met again at Matthews Arena the following night, exchanging shots during the early minutes of the first period. The environment on the ice was tense, with both teams receiving penalties for roughing throughout an aggressive first period.

It was the Huskies who drew first blood just five minutes into the game. Jozefek’s shot deflected off Swayman’s pads, but UMaine second-year forward Chase Pearson accidentally tapped it in for the point.

With 6:20 left in the opening frame, the Black Bears evened the score at one with first-year defenseman Alexis Binner firing through an NU screen to earn his first collegiate goal. With just eight seconds left before the first buzzer, second-year forward Mitchell Fossier flew past NU defense at the blue line, beating Primeau in a one-on-one to give the Black Bears the lead.

“I thought we were all over them for the most part of that first period,” Sikura said. “Two little mistakes ended up in the back of the net, but I think the key is to just stay positive. We’ve got two more periods to win and come back and win the game.”

Less than seven minutes into the second period, third-year defenseman Eric Williams ripped one from the faceoff dot to beat Swayman and knot the score at two. Exactly one minute later, some chaos in the crease earned Sikura his 12th goal of the season as he slipped the puck through a cluster of defenders into the net. The play was reviewed by officials, but the goal stood and NU was in the lead, 3-2.

Sikura’s point moved him into sole possession of 27th on Northeastern’s all-time scoring list, with 122 career points. With 12 shots on goal during Saturday night’s game, Madigan said Sikura’s game has only gotten better throughout the season, leading the team along with linemates Stevens and Gaudette.

Sikura was absent for 10 days in late December, competing with Team Canada to capture the Spengler Cup in Switzerland, an experience that Madigan believes gave Sikura an unprecedented boost in his game.

“You’re playing with pros and you’re playing at a higher level. [Sikura] was there for 10 days, and he was around the pros and living with former NHL players, so [he] just absorbed some of that,” Madigan said. “He’s a mature young man and he’s a poised young man on the ice and how he conducts himself, but you gain a little bit more of that.”

The Red and Black held their one-point lead through the rest of the third period. With ten minutes remaining, Keeper was removed from game after receiving a two-minute minor for hooking and two ten-minute majors for misconduct after slamming the penalty box door.

Tralmaks also left the ice after receiving a ten-minute major for game misconduct for checking second-year Ryan Shea from behind. In the next play, just second later, Swayman received a two minute minor — served by third-year forward Brendan Robbins — for tripping up fourth-year forward and captain Nolan Stevens in the crease. This gave the Huskies a two-minute 5-on-3 advantage with just seven minutes to go in the game.

First-year forward Zach Solow took a shot that nipped off the post and deflected near the end the power play, but despite adamant efforts to score during their two-man advantage and just after the Black Bears got a fourth man on the ice as the minor expired, third-year forward Brandon Hawkins slipped the puck right under Swayman to earn his third goal of the year and give the NU a two-point lead with less than four minutes remaining in regulation.

With just over one minute remaining, UMaine pulled Swayman in an effort to score with an extra man on the ice, but their efforts proved unsuccessful as NU regained control of the puck and Stevens buried an empty net goal from out on the red line.

Almost immediately after, first-year forward Bobby Hampton was called on a two-minute minor for interference. With Swayman back on the bench, UMaine took to the ice with a 6-on-4 advantage and potted one final goal with 42 seconds left, scored by fourth-year forward Nolan Vesey.

“What I did say to our kids was, ‘Hey, we can still get better,’” Madigan said. “There’s parts of our game that we still need to get better at, so that’s the positive sign for me. We’ll take where we are right now, but we’re still getting better as a team and we’ll get back at it Monday morning and get ready for next week’s opponent.”

The Huskies travel to Amherst next weekend to take on the University of Massachusetts at 7 p.m. Friday and will face them again at Matthews for an 8 p.m. puck drop Saturday night.