Huskies take one at home, extend win streak to three 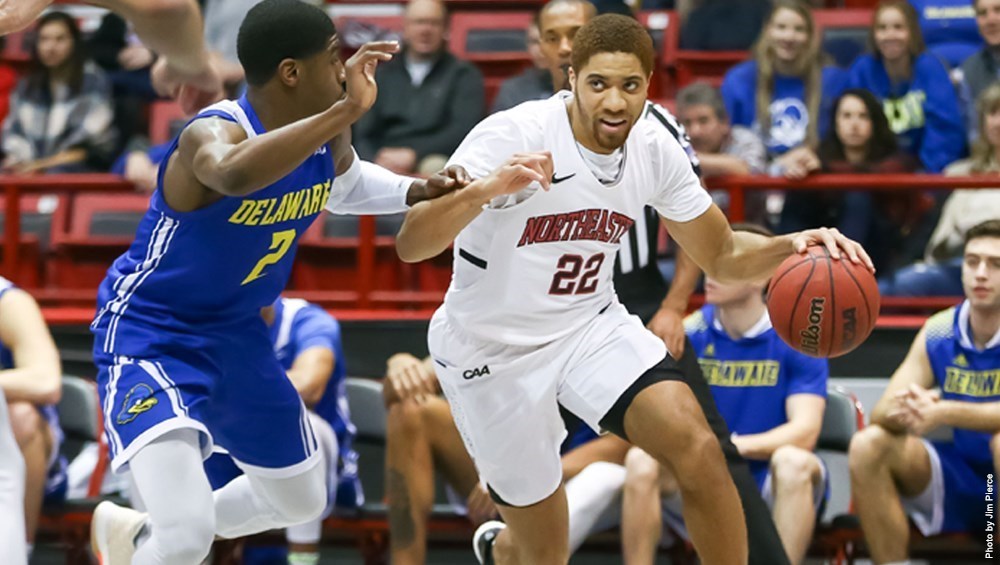 The Northeastern men’s basketball team (13-7) came away with a 76-64 victory over the University of Delaware Saturday at Matthews Arena. It was the team’s first home game in nearly two weeks, following three games on the road and two consecutive victories.

The Huskies have sole possession of first place in the CAA and improved their conference record to 6-2 Saturday.

The teams looked evenly matched through the first 20 minutes of play; the scoring margin stayed within four points and there were 14 lead changes.

In the final two minutes of the first half, the Huskies managed to pull ahead by two points after fourth-year guard Devon Begley sunk a three-pointer from the corner, giving the home team a 28-26 advantage. The Blue Hens tied it up at 28 with a layup from fourth-year forward Skye Johnson and a three-pointer from second-year guard Ryan Daly sent Delaware into the dressing room up 31-28.

A few quick possession changes early in the second half resulted in the Huskies taking the lead just two minutes in. Third-year guard Anthony Green reached over the Blue Hens’ defense and slammed one home, giving the Huskies a one-point edge.

“We started getting the ball inside,” head coach Bill Coen said. “At the start of the second half we got the ball in to Anthony Green, and he was strong around the rim and we got a little separation.”

The Huskies took control of the game as third-year guard Donnell Gresham Jr. made another three, expanding the lead to 39-33

Gresham led the team in points, scoring 17 points in the second half and snagging seven rebounds throughout the game.

“[Gresham] has got great composure out there, especially in close games,” Coen said. “He’s not afraid of the moment and he stepped up and made some really big shots for us. He’s been playing well.”

Delaware tied the game back up, but the Huskies took momentum back with three baskets from third-year guard Vasa Pusica and two free throws from Gresham in just three minutes of play.

Pusica, who was in foul trouble during the first half, finished the game with 16 points, 13 of which came in the second half.

After a 12-2 run, Northeastern held a 43-44 lead with just under 10 minutes to play. The Red and Black saw more points from Pusica, Gresham, second-year guard Bolden Brace and first-year forward Tomas Murphy. A dunk from Brace was followed by a three-pointer from Blue Hens’ third-year guard Darian Bryant and another layup from Mosley, but the Blue Hens just couldn’t seem to catch the Huskies and close the gap.

With the deficit down to just four, Gresham fired off seven quick points to give the Huskies an 11-point edge with 6:31 to go.

A 6-0 Delaware run led Coen to call a timeout, allowing the team some time to regroup, after which Gresham hit the floor and sink his third three-pointer of the day.

With a much-needed boost and an eight-point edge, the Huskies sunk all eight free throws during the final minutes of play and come out on top, 76-64.

“They gave us a fight all night long,” Coen said. “I thought [Gresham’s] shooting and Pusica’s shooting at the end of the game really gave us a separation, along with Bolden Brace, who really played well for us in the second half, both defensively, rebound wise and moving the ball.”

The Huskies will be on the road again next week, seeking revenge against Hofstra University on Thursday at 7 p.m. followed by a Sunday afternoon meeting at Drexel University.