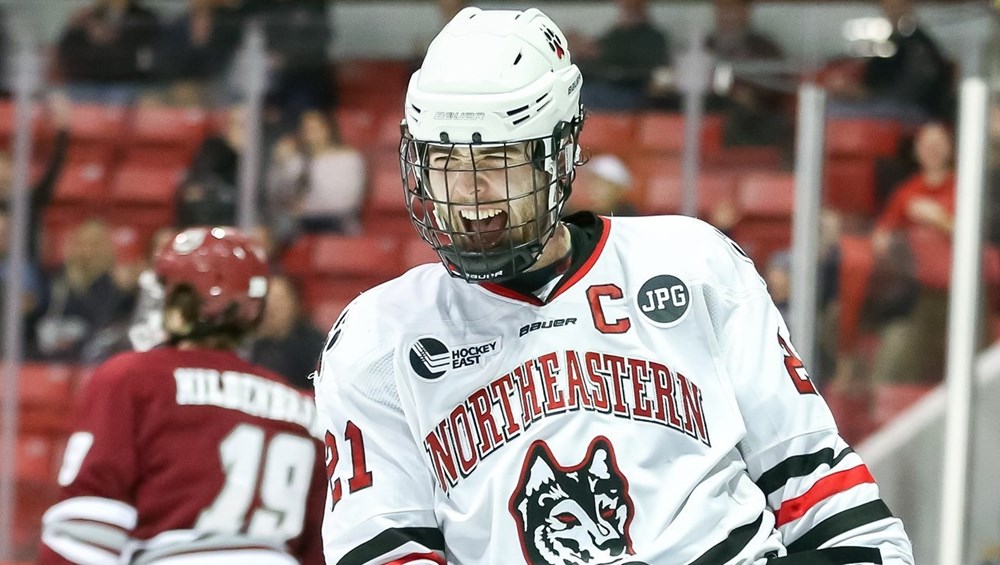 Following a 0-3 shutout loss at the hands of the University of Massachusetts, the Huskies headed back to Matthews Arena to face off with the Minutemen for the second time of the weekend, redeeming themselves with a 5-0 victory.

Friday night’s loss in Amherst broke the Huskies’ nine-game undefeated streak, but the setback was not enough to shake NU from first place in Hockey East, where the team remains one point ahead of cross-city foes Boston College.

“It was nice to see that transformation from last night to tonight,” head coach Jim Madigan said after Saturday’s game. “Credit to the players, because they put themselves in a position where they weren’t happy with last night’s performance. Led by our captain, who got the kids going, and the leadership of our upperclassmen, really had our players focused tonight for a real good game.”

In a scoreless opening period Friday night, things seemed hopeful as NU controlled the play throughout the first 20 minutes. Despite outshooting UMass 15-7 in the first, the Huskies were unable to find the back of the net and didn’t fare much better throughout the rest of the game.

UMass first-year forward Mitchell Chaffee earned the Minutemen their first two goals, striking twice within five minutes halfway through the second period, the second of which came during a UMass power play.

The Huskies couldn’t seem to catch up, and were down by three early in the third after UMass third-year forward Austin Plevy slammed a one-timer past first-year NU goaltender Cayden Primeau.

Primeau had 29 saves Friday night, but took his first loss in net since the Nov. 18 game against Boston College.

The Huskies were forced to kill off seven penalties throughout the game, including two five-minute majors for contact to the head, opposed to UMass’ two minors.

“We were in quicksand all night long,” Madigan said. “We couldn’t get anything going offensively, the only thing that worked out well was that we killed some penalties well, but they were the better team for that second and third period.”

Saturday’s contest got off on a much better foot for the home team, with fourth-year forward Dylan Sikura putting NU on the board 31 seconds into play. Sikura received the puck off the stick of second-year forward Biagio Lerario and sent it to the back of the net for his 13th goal of the season.

A UMass penalty for too many men on the ice gave the Huskies an opportunity to increase their lead to two, but despite a close call in the crease with NU pressuring the defensive screen, the Minutemen were able to kill the penalty.

The final three minutes of the opening period were in favor of UMass, with NU down a man after first-year forward Austin Goldstein was called for hooking. UMass put the pressure on in the offensive zone, but blocks from fourth-year defensemen Trevor Owens and Garrett Cecere, along with big saves from first-year goaltender Cayden Primeau, kept the Huskies ahead by one.

Coming out of the dressing room for the middle frame, the Huskies struck again just 46 seconds in. Fourth-year forward and captain Nolan Stevens took it up the right side, trailing a UMass defenseman, and flipped it backhand over the pad of first-year UMass goaltender Matt Murray for his 100th career point.

Stevens is the 52nd player in team history to reach 100 career points and the third this season, along with Sikura and third-year forward Adam Gaudette.

Stevens has battled through a few injuries during his time with the Huskies, including a shortened season last year after suffering an injury during practice that resulted in labrum surgery.

“Last year was kind of a tough year with the injury, but I’ve been really fortunate to have good linemates, with Zach [Aston-Reese] and my brother [John Stevens] last year, and this year I’ve been playing with Sikura and Gaudette for most of the year,” Stevens said. “The other part of that is that I had a coaching staff that believed in me and gave me the opportunity to produce.”

The Huskies had newfound momentum and sent shots at Murray one after another. Second-year forward Matt Filipe and Gaudette both fired off quick shots, skating around the UMass defense only to be blocked by Murray. Stevens and Sikura also had their turns taking shots on goal and with 13 minutes to go in the second, NU was outshooting Umass 14-7.

Looking to make a comeback in their offensive zone, UMass second-year defenseman Josh Couturier fired two shots on goal, both blocked by third-year forward Patrick Schule. A two-minute minor for hooking landed Owens in the box, but the the Minutemen were unable to find the back of the net even with a man advantage.

Northeastern was putting the pressure on UMass defense, which finally paid off as Stevens scored again with 2:53 to go in the period. Sikura tipped it off to Stevens on the right side, and the captain went in through the slot, slipping it past Murray for his second point of the night.

The teams came back for the third period with the Huskies leading 3-0. UMass was fighting hard to stay in the game, but first-year forward Brandon Schultz padded the Huskies’ lead, potting his first collegiate goal at 11:27.

“Brandon Schultz, I thought, played really well,” Madigan said. “He’s been in and out of the lineup but he responded well today, I thought he skated really well. He got a big goal, it was 3-0 at the time, and there’s no lead that’s ever comfortable, but when you get that fourth, you feel really good.”

UMass second-year forward Niko Hildenbrand and Gaudette received matching minors for hitting after the whistle, making the game a four-on-four. With 20 seconds remaining in the matching minors, UMass third-year defenseman Ivan Chukarov received a minor for hooking, giving the Huskies a two-minute advantage.

The captain struck again on the power play with 7:30 left in the game, scoring his third of the game to complete the hat trick. Sikura found Stevens in the slot again and set him up with a perfect pass to send it around Murray for the Huskies’ fifth point of the game.

Play was four-on-four for about two minutes until first-year defenseman Billy Carrabino received a two-minute minor for interference. The end of Stevens’ two minute minor with 2:12 left to play brought the play back to even four-on-four strength.

UMass remained unsuccessful despite many attempts to score and the Huskies were ahead 5-0 at the final buzzer.

“For me, this was our biggest character win of the season,” Madigan said. “We went in there shorthanded tonight, [Jeremy] Davies was up in the stands and we’ve been battling the flu all week long… so going in tonight short-staffed, and [Grant] Jozefek is out, so for me this was a gut-check win and a character win for our club.”

Northeastern will be back in action next week, facing off against Providence College at Matthews Arena Friday night at 7 p.m. to kick off the home-and-home set.