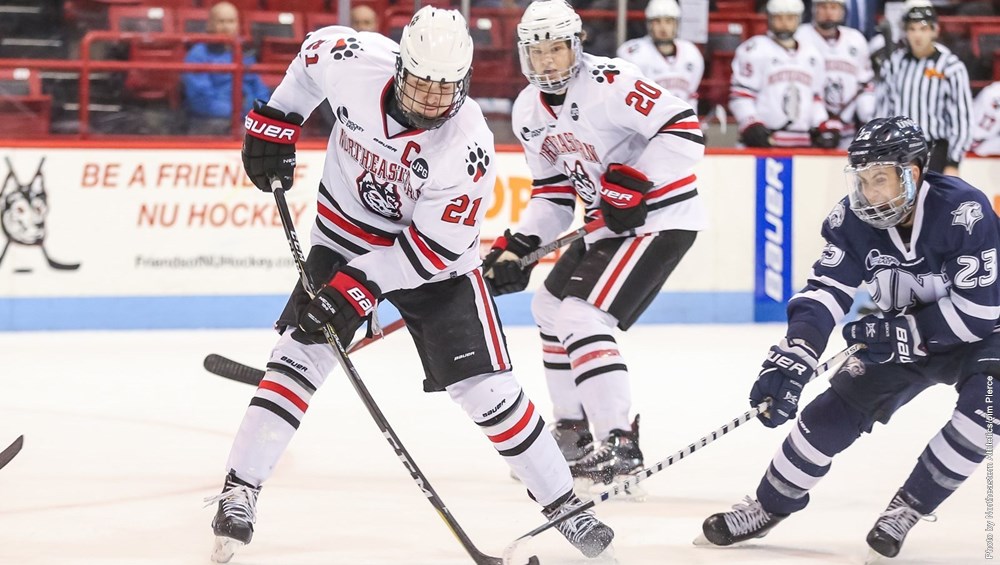 Heading into Friday night’s game two points behind first-place Boston College, the Northeastern men’s ice hockey team looked to rebound from a 0-1-1 weekend against Providence College last week. The Huskies hosted the University of New Hampshire (UNH) Friday night and came away with one point from the 1-1 game to maintain second place in Hockey East.

“It’s a missed opportunity for our hockey club,” head coach Jim Madigan said. “We didn’t seize an opportunity. We can look at the shots on goal and say, ‘Hey, we had 41 and they had 19,’ and walk away thinking that we were good… but at the end of the day we didn’t find a way to win.”

Friday night was a fierce battle between Northeastern’s entire roster and UNH fourth-year goaltender Danny Tirone, who stopped 40 of 41 shots.

“[Tirone] held on and he kept us in the game,” UNH head coach Dick Umile said. “We played a solid third period and had most of our chances in the overtime after we killed off the penalty… They’re a real good team and in the second period they were just manhandling us, moving the puck, and [Tirone] was making the saves.”

The first half of the first period was scoreless with shots favoring the hosts 6-4 at the 7:30 mark. A wrister from third-year winger Adam Gaudette nearly found the back of the net as Tirone fumbled the puck before securing the save.

Gaudette made another attempt as the clock waned closer to three minutes. He stole the puck in the offensive end and dished it to fourth-year forward Dylan Sikura for the shot, which went just high of the net.

A Sikura penalty for hooking gave the Wildcats a man advantage, allowing first-year defenseman Max Gildon to rip it from the point and beat first-year NU goaltender Cayden Primeau for the first goal of the game.

The Huskies spent the last minute and a half of the first on the power play, ripping shot after shot on Tirone in an attempt to even the score. But the senior came to play, effectively killing the power play himself and sending the Huskies into the locker room down one.

Fifty-five seconds into the second, it was fourth-year forward and captain Nolan Stevens who put Northeastern on the board. Sikura carried the puck over the blue line before sending it over to Stevens, who squeezed it through a screen of Wildcat defensemen to beat Tirone gloveside.

By the time the second period expired, the Huskies were outshooting the visitors 26-10. The score was knotted at one thanks to the heroics of Tirone, who was all over the crease making save after save. A slapshot from first-year center Zach Solow, a wrister from Sikura and a rocket from Gaudette were all no good when Tirone managed to stop each one.

Fast-paced possession exchanges across the red line filled majority of the third period, but to no avail for either team. The halfway mark showed a sliver of hope for the Huskies after a rebound from first-year winger Bobby Hampton’s shot caused a rush in the crease. NU was unable to find the back of the net through all the chaos.

Primeau was also being put to the test at the other end of the ice, snatching UNH first-year forward Charlie Kelleher’s slap shot with his glove and deflecting countless pucks off his pads.

Following a play during which he was bundled behind the Wildcats’ net with no call, second-year center Biagio Lerario was handed a 10-minute misconduct penalty with under seven minutes to go. Lerario, tossing his helmet on the ice, retreated to the locker room.

The Huskies took to the power play again with 5:30 remaining in regulation after a UNH tripping penalty. Gaudette and Sikura carried the puck over the red line into the offensive zone, but Gaudette was shut down by Tirone, who splayed out on his stomach across the crease but still managed to block rebounds from both Sikura and Stevens. In the chaotic scramble in the offensive end, Gaudette ripped a slapshot from inside the faceoff circle, actually breaking his twig in half with the force.

Back to even strength with less than three on the clock, the Huskies were still hammering away, trying to find an opening in the stonewall that was Tirone.

“I was just trying to compete,” Tirone said after the game. “I know that they probably have the best offense we’ve seen all year, so as a goalie knowing that going in, [I was] just trying to battle and compete as much as I can and come out and challenge them.”

A UNH face-off violation minor on third-year center Marcus Vela left the Huskies with the advantage with 44.5 seconds left in regulation. A wrister from Sikura almost sealed it at the buzzer but Tirone’s blocker redirected it up and over, which meant an extra five minutes of play.

NU had 1:16 of power-play time to begin overtime. An attempt by Davies at the faceoff dot was saved by Tirone just as the teams returned to even strength.

A two-on-one rush by the Wildcats looked bad for NU’s hopes for victory, but Primeau came up with a big glove save to keep them in the game. The extra five minutes was not enough for either team, and the final buzzer declared the game a 1-1 draw.

“If we’re going to have a run at this, we got to get more guys going and playing the way we need to play with a little bit better effort and better execution,” Madigan said.

The Huskies take the ice again Monday night at TD Garden, playing cross-city foe Boston College in the first round of the Beanpot tournament. The team returns to Hockey East play next Friday, hosting the University of Connecticut at Matthews Arena with a 7 p.m. puck drop.