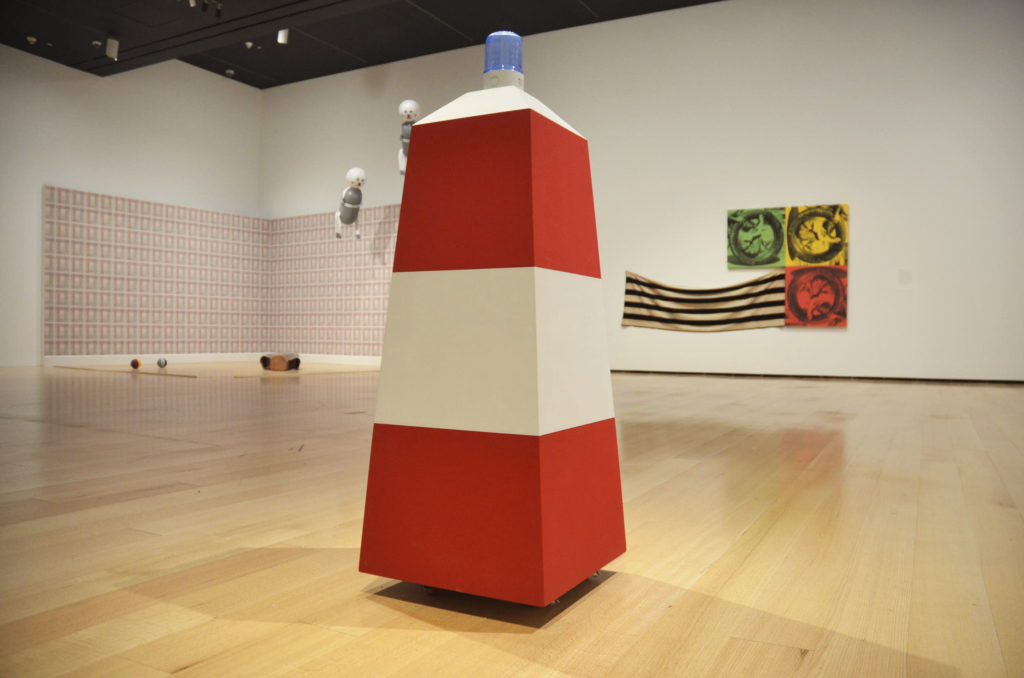 "Fire Cone," wood, acrylic, light fixture and caster wheels, is also about surveillance and censorship. Its blue light and red stripes signal a nationalist authority in a state of emergency. / Photo by Samuel Kim.

A patterned wallpaper and paper mache figure sounds conspicuous, but the award-winning exhibit it belongs to is hidden behind an unobtrusive wall on the second floor of the Museum of Fine Arts.

Annette Lemieux’s “Mise en Scene” exhibit received the Boston Museum of Fine Arts’ 2017 Maud Morgan Prize, which honors a female artist from Massachusetts who has made a significant impact in the art world. “Mise en Scene” features several striking pieces, including a colorful floor-to-ceiling print of radio antennas and a flashing blue light bulb mounted to a red and white striped base.

“In this exhibit, [Lemieux was] playing with color a lot,” said third-year English major Nicole Sojkowski. “[She was] mixing movies with wood sculptures. It’s kind of the different play of materials that I like.”

At first glance, the pieces seemed unrelated to one another; the exhibit’s works are made from varying mediums and represent different subjects. But each piece was inspired by films Lemieux saw as a child, including François Truffaut’s “Fahrenheit 451” (1966), Robert Mulligan’s “To Kill a Mockingbird” (1962), Charlie Chaplin’s “The Great Dictator” (1940) and Fritz Lang’s “M” (1931).

“Most of the films [Lemieux] draws from in ‘Mise en Scene’ are set in small-town environments, and they all deal with retrograde value systems such as racism, sexism, classism, censorship, excessive societal control, surveillance,” said Liz Munsell, the MFA’s Lorraine and Alan Bressler Curator of Contemporary Art.

Although decades old, the themes present in the films and artwork can still be seen today.

“This show is yet another reminder of the retrograde values that are currently at war with the future majority,” Munsell said.

There are no easy solutions for these problems, but art like Lemieux’s work in “Mise en Scene” marks a colorful step in the right direction.

“Traditionally, [art] has been a very subversive way to express issues in oppressive regimes,” said Gail Pendleton, a Plymouth resident and political activist, during a recent trip to the museum. “Sometimes it takes seeing something for issues to resonate.”

“We need everyone out there [working for change] in some little way,” she said. “Even if it’s making art, that’s great. Make more art.”