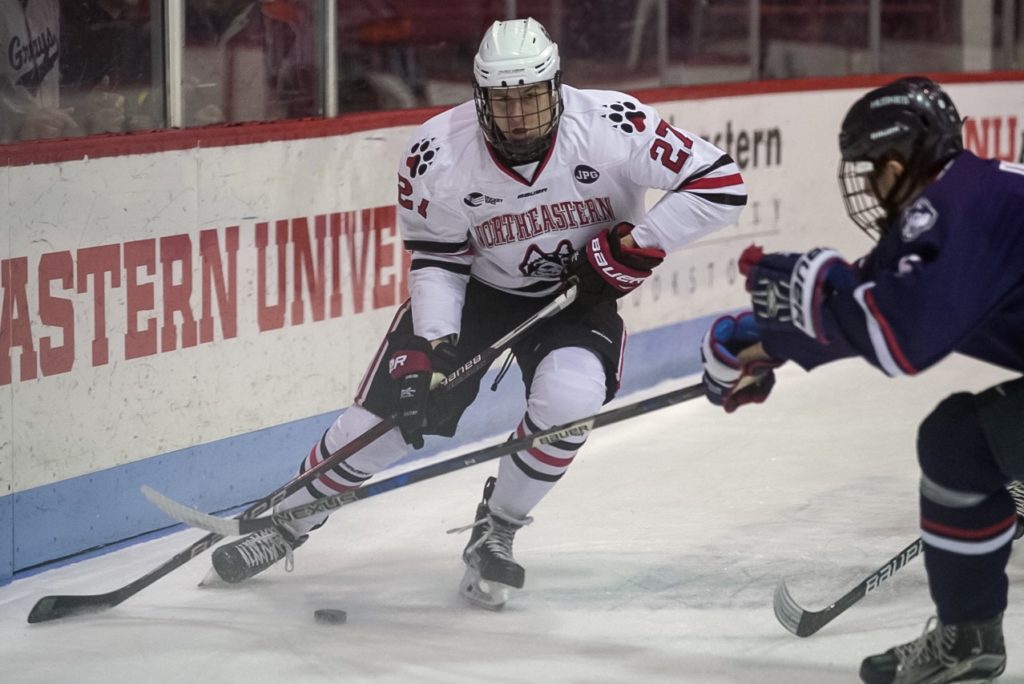 The Huskies had held steady at second place in conference standings for weeks, trailing just one point behind BC. Despite efforts to finally pull ahead in the conference standings, NU fell short with a 4-2 loss in Friday’s home ice contest against the University of Connecticut. The loss dropped them to third in Hockey East, behind BC and Providence College.

“It was a great opportunity for our team to take a step forward after the emotional win Monday night, and we didn’t answer the bell for the first two periods,” head coach Jim Madigan said.

The opening period was quick-paced, with both teams exchanging scoring opportunities across the neutral zone. UConn forward Benjamin Freeman nearly found the back of the net at the 12-minute mark, but goaltender Cayden Primeau was there with the leg save, blocking both the initial shot and ensuing rebounds while splayed out in the crease.

Taking advantage of an NU tripping minor on defenseman Ryan Shea, UConn again tried to put it on net from the point through a screen of defenders, but Primeau was there with the block once again.

As the clock ticked down, the Huskies put the pressure on in the offensive end. Second-year center John Picking jumped off the bench and into a perfect position to fire a rocket at Creel, which sailed wide of the net. With UConn captain Derek Pratt in the box for interference, the Huskies spent the final minute of the period on the power-play. With the Huskies’ first line offense of captain Nolan Stevens, Adam Gaudette and Dylan Sikura, better known recently as the Big Three, who fired shot after shot at Creel, the Huskies saw multiple close calls. But the buzzer sent both teams into the locker rooms after a scoreless period.

The second period began in NU’s favor, with UConn killing off the remainder of an interference minor. The Huskies’ first line skated circles around UConn’s defense on the power-play, setting up near-perfect scoring opportunities, but were unable to notch a goal. Fourth-year forward Dylan Sikura nipped a near perfect shot from the slot, but the ping of the puck hitting the crossbar rang loud and clear throughout Matthews.

Just before the five-minute mark, UConn forward Spencer Naas beat Primeau five-hole through a NU screen to put UConn on the board. Coming off a faceoff just 18 seconds later, Freeman got a tip on the puck, tapping it in past Primeau again for a quick 2-0 lead.

“They scored two [goals] within seconds, and both plays we had pucks on our sticks and we were surprised that someone was actually trying to get the puck back from us,” Madigan said. “We were soft on pucks, and both of them were turnovers that resulted in goals.”

Although the Northeastern power-play unit saw plenty of shots on UConn’s net, the Huskies were unable to put anything in the back of the net. With just over two minutes left to play in the second, NU was sending pucks flying all over the offensive end. Biagio Lerario nearly tipped the puck in high over Creel, but the goaltender snagged it with his glove.

A slapshot from Adam Gaudette was blocked by a screen of UConn defenders and a one-timer from Sikura went just wide of the net. At the end of the period, UConn outshot the Huskies 24-20 and maintained a two-goal edge.

The visitors netted their third goal of the game within the first two minutes of the final period. Forward Maxim Letunov slammed one home top-shelf to leave the Huskies trailing by three.

With 11:30 on the clock, some chaos in the crease put the puck in the back of UConn’s net thanks to defenseman Jeremy Davies and Stevens, who tipped in the loose puck in front following a shot from Davies. The call on the ice was no-goal because officials said a whistle had been blown, but the play went under review and the call was reversed, giving the Huskies their first goal of the game.

With the momentum on their side after the goal, the Huskies got to work on the offensive side. The Big Three’s work paid off again at the seven minute mark, with Gaudette slamming one home past Creel for his 21st goal of the year.

The team’s top offensive line, comprising Sikura, Gaudette and Stevens, has been a powerhouse all season, but inconsistency among other forwards has taken a toll on the Huskies’ scoring in recent games.

The Huskies were fighting for a comeback and time was ticking. Sikura tried completing the hat trick for the Big Three, firing two quick wristers on net that Creel blocked. NU pulled Primeau in favor of the extra man with less than two minutes to go. A stray puck UConn fired across the neutral zone looked like it was about to cement the visitors’ victory, but redirected ever-so-slightly so it just barely tapped the post and went wide of the net.

With six attackers in the offensive zone, an empty net down the other end and one minute on the clock, the Huskies set to work. Sikura almost found Stevens in front, but the pass was just off target. A shot from Brandon Hawkins went wide of the net, and after some possession trouble in the neutral zone, UConn’s Corey Ronan potted an empty net goal with just 2.3 seconds left in regulation, giving the visiting Huskies the 4-2 victory.

This loss is a tough one to swallow, but with the Beanpot championship game just days away, Madigan is not worried about the loss taking a toll on his team’s performance.

“They can respond, they know what they need to do,” Madigan said. “We were in the same spot here last Friday night and we responded in the first Beanpot game, so it’s up to them. Guys have to take stock in their own play and where they’re at and say, ‘Hey, I want to be a difference maker, I don’t want to let my teammates down.’”

The Huskies will take the rest of the weekend off in preparation for the Beanpot finals Monday night, where they will attempt to end their 30-year championship drought. Puck drop against the Boston University Terriers is set for 7:30 p.m. at TD Garden.