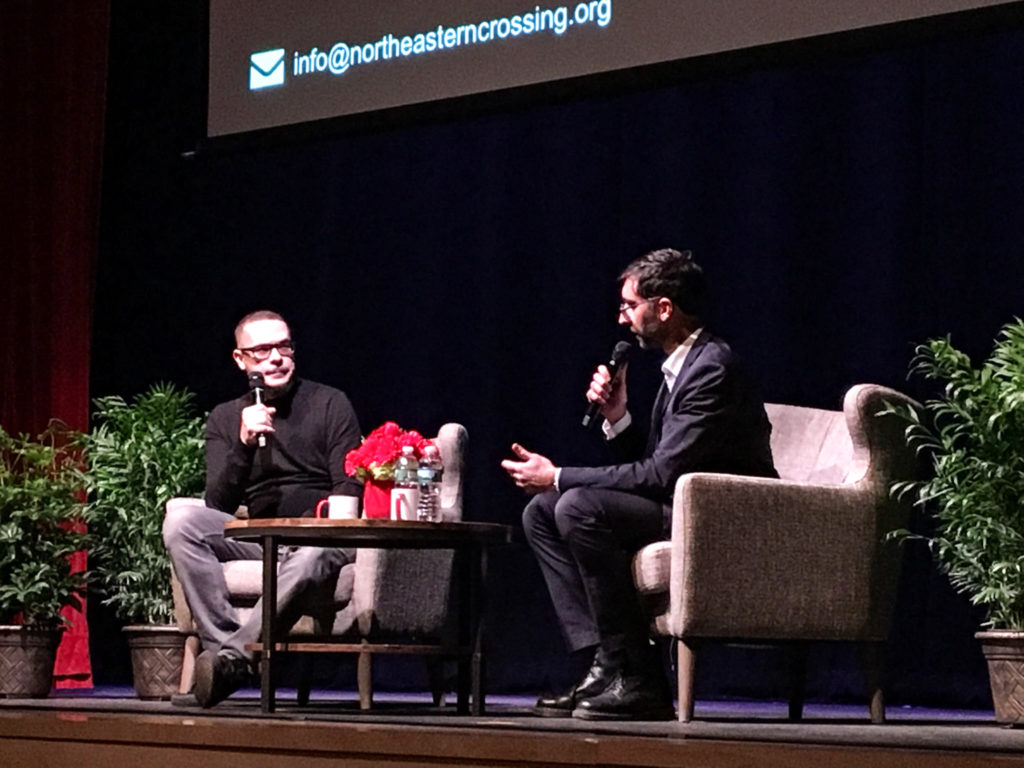 Writer and Black Lives Matter activist Shaun King spoke to Northeastern students about his four-part plan for effective local activism in front of a sold-out crowd in Blackman Auditorium Friday.

“Put local people in local positions like the city council or district attorney’s office who actually represent what we care about,” he said.

King hopes his plan will combat federal government policies by creating social change on a local level. The first part, he said, is organizing people and taking advantage of their unique traits.

“It’s not enough to be marching in streets, with your butts in seats, RSVPing for events,” he said. “We have to have an assessment of what skills and experiences are in the room.”

Then, a movement should energize and excite its members to keep them around for a long time, King said. After energizing activists, King’s third step involves crafting a strategic plan for how organizers around a cause can achieve their goals. Finally, King believes a cause must acquire funding in order to sustain itself.

“You have to have a lot of money. If you happen to have the money but no plan, you will fall right on your face,” he said. “Get all four of those things moving in concert or we won’t see change happen.”

King said the National Rifle Association, or NRA, is an example of an organization that succeeds in each part of his plan.

“I loathe the NRA, but I’m willing to ask myself what’s so good and so effective that a man can walk into a school in Sandy Hook and kill 20 babies and the country says ‘okay,’” King said.

King wants more local lawmakers to advocate for reforms such as gun control because these issues are important to their constituents.

“It’s not just police brutality and corruption, but rampant bigotry and xenophobia that affects so many of us,” he said.

Summer Williams, a theatre instructor at Boston Conservatory, was particularly interested in King’s plan for electing district attorneys, or DAs, from local areas.

“I was excited to learn about his work with thinking about DAs and local change,” she said.

Federal lawmakers today cannot relate to the issues facing everyday Americans because they did not face these issues themselves, King said.

“We elected leaders who don’t have any connection to everyday people,” he said. “We get politicians who have to talk about jobs their grandfathers had. Is your only connection to our work what your grandfather did? Did you not do that yourself?”

King said that without a clear plan, people who oppose the government’s policies are powerless.

“We allow those who do us harm to basically dictate the terms of the work we do,” he said. “We primarily, as protestors, are reacting and it doesn’t allow us to organize a cohesive local plan for change.”

Community coordinator at the Huntington Theatre Company Candelaria Silva-Collins attended the speech and was inspired by King’s plan for championing a cause.

“He gave some really good strategy about how movements have to be organized,” she said. “Looking at enemies or organizations that are politically opposite to us to figure out how they’re effective is a helpful strategy.”

King thinks local governments are finally becoming more strategic by acting on the progressive beliefs they always claimed to have.

“Cities like Boston, my hometown of New York, Seattle, Austin and San Francisco have amazing liberal reputations. But those of us on the ground say the reputation of the place doesn’t match reality,” he said. “What I’m seeing now, particularly in the Trump era, is cities are starting to say, ‘We need to be the change agents we can be and should’ve been.’”

Cities across the country are struggling to handle gentrification, King said, pointing to Northeastern’s expansion into Roxbury that he emphasized is displacing residents who have lived there for generations.

“Gentrification is a scandal,” he said. “Northeastern and others have every right to figure out how to expand, but there has to be a responsible expansion. Sadly, there are very few examples of universities and corporations that are doing that well.”

Although gentrification and other matters have been contentious for a while, President Donald J. Trump has changed how King approaches these issues.

“I’m not at all thankful Trump is president, but what it has done is put our back against the wall to organize in a way that is intersectional,” he said. “We’re putting aside our differences and figuring out how we can build a movement that actually makes change happen.”