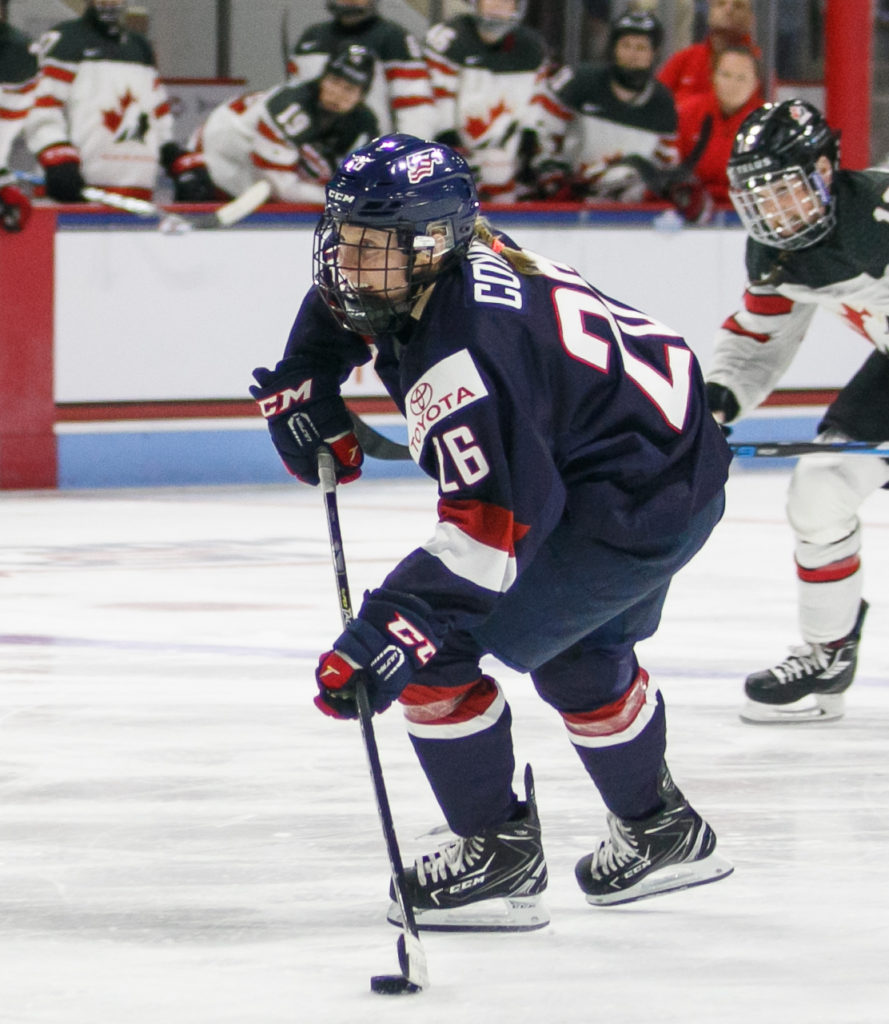 For the first time in 20 years, the U.S. women’s hockey team brought home the gold after defeating Canada 3-2 in a shootout early Thursday morning. And for the third time ever, a Northeastern alumna has become an Olympic gold medalist.

“It’s obviously something that you work your whole life for,” said Kendall Coyne, a 2016 NU graduate. “You just want to be the best that you can every day for your team and for your country, so you obviously want to excel on the biggest stage.”

Coyne, 25, has now competed in two Olympic games, winning a silver medal in Sochi, Russia, in 2014 before heading to Pyeongchang, South Korea, this year. The Illinois native has garnered a lot of attention since her start with the Huskies in 2011, where she eventually became one of the most decorated players in Northeastern history.

Coyne won the Patty Kazmaier Award in 2016, an honor presented to the top female player in college hockey. She was an First-Team All-American and WHEA All-Star her senior year and is the leading all-time scorer for Northeastern hockey with 249 points. Coyne was also picked third overall in the NWHL 2015 entry draft by the Boston Pride, but ultimately decided to focus on other aspects of her life and occasionally played with the independent Minnesota Whitecaps in Minneapolis instead.

“My time at Northeastern obviously played a pivotal role in me getting to the world stage,” Coyne said. “I developed myself as a hockey player at Northeastern and also as a person, academically and athletically in so many ways. Under coach [Dave] Flint’s guidance, there were a lot of things that he helped me with, on and off the ice, that helped me get to where I am today.”

Flint coached Coyne through her four years of playing at NU, and is proud of all the the former captain has accomplished.

“She’s a kid who has worked really hard and deserved it,” Flint said. “I know she was crushed after the 2014 Olympics and getting silver there, and she really set her mind to winning gold this time around, along with all of her teammates. To see it all come together for her is a great feeling knowing how hard she worked to achieve that.”

Coyne was appointed to the 2018 U.S. Olympic women’s ice hockey team early in January and was one of 10 returning Olympians on the team. Her family was in Pyeongchang to watch her compete in the games, as was her fiancé Michael Schofield, who plays for the Los Angeles Chargers in the NFL.

“It’s hard to put into words because it was such a monumental win,” Coyne said. “Not only for USA Hockey but for women’s sports and women’s hockey in general. It was a tremendous experience to be a part of and I’m still kind of soaking it in.”

The win for the United States ended Canada’s pursuit of their fifth consecutive gold medal. Finishing the five-game set with two goals and an assist, Coyne played an instrumental role in leading Team USA to the top of the podium.

“[Coyne] has always been a really great hockey player, but her game has really developed to another level,” Flint said. “She’s been on a mission since those last Olympics, so it’s been great to see her development from when she came here seven years ago to where she is now and all of the great things she’s done. Everything that she’s achieved is pretty remarkable.”

In the preliminary game against Finland Feb. 11, Coyne scored the goal that tipped the game in Team USA’s favor, breaking the 1-1 tie halfway through the second period. One of the fastest skaters in the Olympic Games, Coyne’s speed played to her team’s advantage when it came to creating scoring opportunities against opponents.

Coyne’s second goal of the games came during the preliminary match against Canada, which resulted in a 2-1 loss. Team USA was able to redeem itself in the gold-medal game against Canada, after defeating Finland 5-0 in the semifinals.

The gold-medal game against Canada was tied 2-2 at the end of regulation, sending it into an scoreless 20-minute overtime period. In the ensuing shootout, Team USA emerged victorious after the sixth round, with Jocelyne Lamoureaux-Davidson sending one into the back of the net while Canada’s Meghan Agosta was shut down with a quick leg save by goaltender Maddie Rooney.

“After we won, immediately there was a rush through my body that I’ve never experienced before,” Coyne said. “It’s hard to describe, but it’s definitely a moment that you train your whole life for. It hits you while you do it, and I definitely felt that after Maddie [Rooney] made the final save.”

With the Olympic gold hanging around her neck, Coyne will head back home to focus on planning her wedding with Schofield, and using the platform as an Olympic gold medalist to serve as a role model for young women in the sport.

“It’s an extremely important role and platform that we need to utilize as Olympic gold medalists,” Coyne said. “We have an extremely unique opportunity to use our gold medal to help inspire future generations, to act as a role model for younger kids, whatever it may be. But it’s a pretty surreal platform and I think we have to use it wisely right now.”