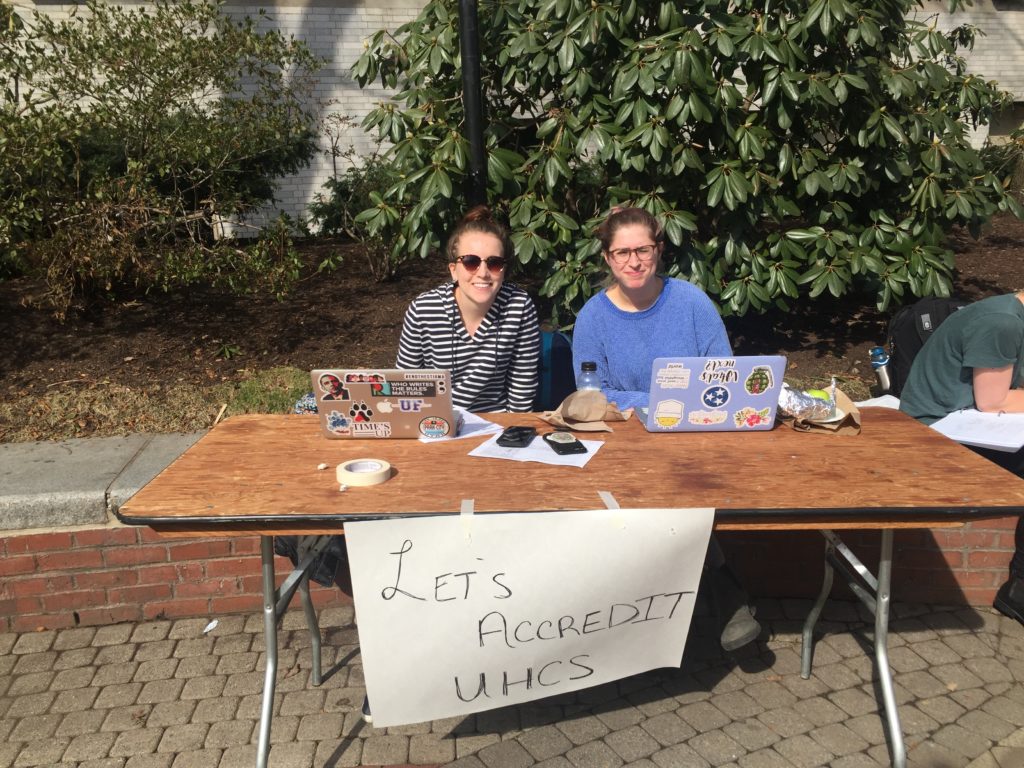 After hearing many student complaints about Northeastern’s mental and physical health care resources, two student groups are working to fund and accredit the University Health and Counseling Services, or UHCS.

Campaigns include the #FundUHCS movement, organized by student mental health advocacy group Behind the SMILE, and an SGA referendum question by the Roosevelt Institute asking the university to accredit UHCS with the International Association of Counseling Services, or IACS, an organization that sets professional standards for university health centers around the world.

In February, the Roosevelt Institute submitted a question for Northeastern’s SGA referendum ballot. The national organization has a chapter at Northeastern and teaches students how to write policy in order to enact change.

The referendum was approved by SGA to appear on the ballot after surpassing the required 750 petition signatures. Meghan Camello, vice president of advocacy for Northeastern’s chapter of the Roosevelt Institute, said they reached this goal more than a week before the March 12 deadline.

“The one thing that I think would shock a lot of the student body is that they are not accredited, because it probably explains why their services aren’t very good,” said Camello, a fourth-year political science and international affairs combined major. “We thought that spearheading this movement to get accredited is the first step in the process to have sustainable services for students.”

UHCS, which has a 1.5-star rating on Google Reviews, has long been a target of criticism from students, who say the health care service lacks funding and resources. In an extreme case from 2016, a student who found the body of his roommate who died by suicide criticized UHCS for only allowing him three weeks of mental health treatment after the incident.

If the university began the IACS accreditation process, the association would send representatives to Northeastern to speak with students and staff to assess the needs of the student body. Using this information, the IACS would then determine a strategy to improve counseling services on campus.

Camello said accreditation would give more merit to the services provided by UHCS.

“The analogy I like to use is, when you graduate with a degree from Northeastern, we’re an accredited institution, so it actually means something,” she said. “You have a degree and you can go use it in the field. If our institution wasn’t accredited, your degree wouldn’t mean anything. And so the same thing with UHCS; the services aren’t accredited, and they don’t have certain regulations that they have to follow to help students.”

Behind the SMILE, a student group that advocates for mental health awareness, is also currently running a #FundUHCS campaign. The group is selling black t-shirts with “FUND UCHS” written on them and has plans to do a photo campaign centered around the shirts.

Isabel Irizarry, a fourth-year psychology major and president of Behind the SMILE, said the group wants to draw attention to student experiences at UHCS as they create a list of goals to bring to the administration.

Irizarry also said Behind the SMILE supports the effort to get UHCS accredited.

“Getting UHCS accredited is in our list of goals, so it’s definitely something we are completely aligned with,” she said. “There just needs to be a higher standard of care and there needs to be more accountability, and I think accrediting UHCS creates that accountability.”

In a March 15 email to The News, university spokesperson John O’Neil said that Northeastern will not take a stance on the proposed changes from student groups.

“The university does not take positions on SGA processes, including candidates and proposed referenda. University Health and Counseling Services and the Office of Student Affairs regularly meet with interested students and SGA representatives, and they will continue to do so,” read the email.

Behind the SMILE executive board member Ffion Titmuss signed the petition to support the accreditation. Titmuss, as a first-year biology and English combined major, has not gone to UHCS after hearing so many stories about poor care.

Titmuss said they feel the question is in line with what students want from the university.

“I think a lot of people love it here and think it’s an amazing university,” Titmuss said. “It’s got so much going for it, advanced in so many ways, but then when you compare UHCS to the centers at other universities in the area, we’re way behind. I think people like the idea of making that match where the rest of Northeastern is.”