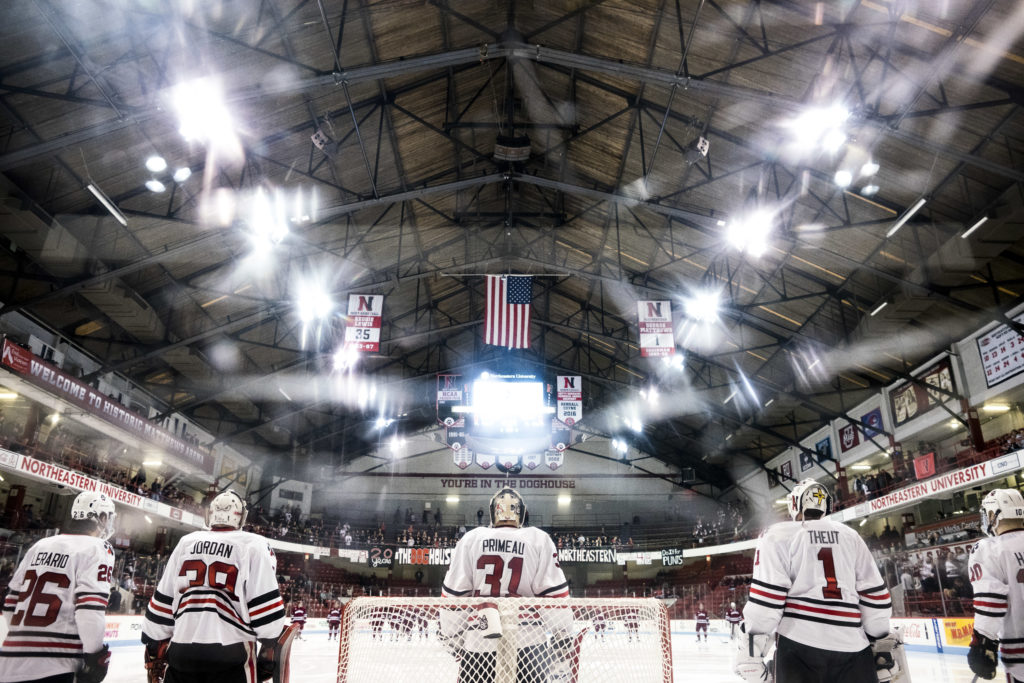 Sweeping the University of Massachusetts 7-2 in game two of the Hockey East tournament quarterfinals wasn’t enough for Northeastern. The team will hit the TD Garden Friday night carting a plethora of Hockey East conference honors to finish out their week.

Emotions ran high heading into game two of the quarterfinals Saturday evening. Northeastern led 1-0 in the best-of-three series, after narrowly defeating UMass 3-2 the previous night. But by the end of the second period, the winner was clear — NU held a 6-0 edge over the Minutemen, who managed to score twice in the final period to prevent a shutout.

“Our goals are to win the Beanpot and to win Hockey East, so now we’re working on our second goal,” head coach Jim Madigan said.

Saturday was a big point night for the Huskies, with six different players notching goals.

Defenseman Jeremy Davies scored his sixth of the year to put the Huskies on the board less than four minutes after puck drop. The Huskies saw two goals from captain Nolan Stevens, one in the first period and a power-play goal in the second.

Third-year center Adam Gaudette and fourth-year winger Dylan Sikura finished the night with one goal and one assist each, including an unassisted breakaway goal from Sikura. Third-year forwards Brandon Hawkins and Lincoln Griffin each tacked on a goal to finish out the night.

With the quarterfinals in the bag, the Huskies set their sights on the semifinals at the Garden, but they aren’t ready to loosen their grip on the Hockey East conference just yet.

The annual Hockey East Awards Banquet was held at the Royal Sonesta Hotel Thursday evening and presented conference players and coaches with awards for their successes in the 2017-2018 season. Among winners were Jacob Bryson of Providence College, taking home the Len Ceglarski Sportsmanship Award; Casey Fitzgerald of Boston College for the best defensive defenseman; Brian Pinho of Providence College for the best defensive forward; and the UMass Lowell Riverhawks, who were awarded the Charlie Holt Team Sportsmanship Award, presented to the team that accrued the least penalty minutes throughout Hockey East play.

A few Hockey East awards are headed home to Huntington Avenue, including the Hockey East Three Stars Award, Hockey East Scoring Champion and Hockey East Player of the Year, all of which were awarded to Gaudette.

Gaudette currently leads the nation in scoring with 59 points this season. He thanked his coaches — Madigan, Jerry Keefe and Jason Smith — and family for believing in him and thanked his teammates for all of their hard work, both on and off the ice.

“[The coaches] saw something in me when they recruited me back in high school and they saw something that stuck,” Gaudette said. “Coach Madigan is always saying, ‘With any individual award, it is impossible without the hard work of the people around you,’ and I just want to thank my teammates for everything they’ve done. They make it enjoyable at the rink every day, they always come with a smile on their face and they’re ready to work.”

The Beanpot MVP and linemates Sikura and Stevens lead the conference in scoring, goals, power-play goals and assists. Sikura and Gaudette were both named Hobey Baker Top Ten Finalists on Wednesday, becoming the fifth and sixth players in Northeastern history to do so. They have notched 229 points combined in their 92 career games. Add Stevens to the mix and they have made a name for themselves one of the most lethal offensive lines in the nation.

First-year goaltender Cayden Primeau was also honored at the ceremony, earning the Stop It Goaltending Champion Award. Primeau sits atop the conference rankings in goaltending with a 1.81 goals against average and a save percentage of .937.

Primeau was also named to the 2018 Pro-Ambitions All-Rookie Team alongside fellow award winner Logan Hutsko of Boston College, who was awarded the Hockey East Rookie of the Year Award.

“The young guy in net, Cayden Primeau, has just been tremendous and consistent from day one,” Madigan said during a teleconference Tuesday morning. “Our defense corps has been really good and our forwards have just made that sacrifice”

Northeastern faces Providence in the semifinals Friday, with puck drop slated for 8 p.m. The teams have met twice this season, leaving the Huskies 0-1-1 against the Friars with both games ending in overtime. Providence sits in third place with 30 points this season, just three points behind Northeastern. Madigan said his team’s focus is on winning Hockey East.

“This is a great opportunity for our young men and they take it seriously because this league is tough top-to-bottom,” Madigan said. “Winning Hockey East is a tremendous accomplishment, as it is for the other three schools whose goal it is. That’s our goal, regardless of what we have secured or haven’t secured, we want to win Hockey East and get in to the NCAA tournament.”