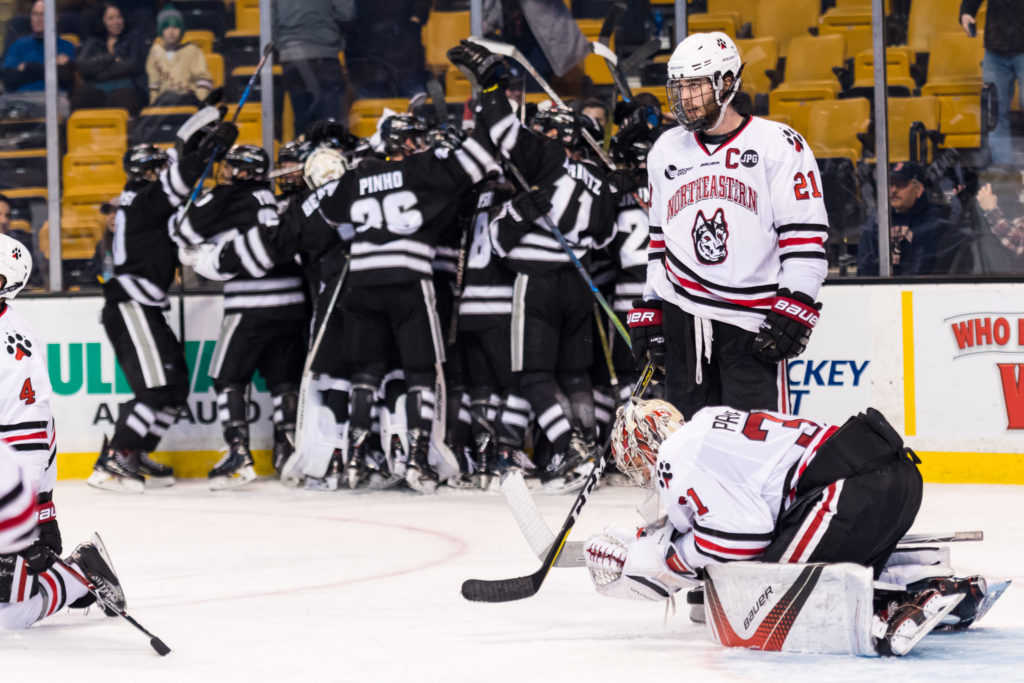 The Hockey East tournament, in which the top four teams in the Northeast battle it out at TD Garden, is one of the most prestigious titles in NCAA Division I hockey. The team that comes out on top is awarded the coveted Lamoriello trophy.

In 2016, Northeastern brought the Hockey East title back to Huntington Avenue for the first time since 1988 — the same year as the team’s last Beanpot win prior to this year’s victory. With the hockey program on the up and up over the last few years and the 2018 Beanpot Championship under their belts, it looked like anything was possible when Friday night’s semifinal contest rolled around.

However, the Huskies’ season came to a devastating end just after midnight, with a 3-2 loss in overtime to the Providence College Friars.

The Huskies finished their regular season ranked second in Hockey East and seventh in the nation, according to the USCHO.com poll, while Providence secured third and ninth, respectively. The Northeastern and Providence matchup was expected to be a pretty even playing field, and that’s exactly how it played out on the ice.

“It was a good college hockey game,” head coach Jim Madigan said. “Two teams that worked hard and played hard. We played them three times this year and all three games went into overtime. Unfortunately on our end, we’ve fallen on the wrong side of the ledger in two of those overtime games.”

Things were slow to get rolling following puck drop. Providence took the first actual shot on goal just over three minutes into play, but first-year goaltender Cayden Primeau saw it coming from the slot and made the stop.

The Friars came up with a messy goal at 8:57, with second-year forward Vimal Sukumaran sneakily poking the puck past a sprawled out Primeau for the first goal of the game.

Defenseman Trevor Owens sent a rocket from the point just a few minutes later, but Providence goaltender Hayden Hawkey got a glove on it. Hawkey steered aside more shot attempts over the next few minutes, this time from winger and Hobey Baker Finalist Dylan Sikura, and the Huskies finished out the period down by a goal.

Heading into the second period, Northeastern outshot Providence 13-8 despite the losing score. The Friars controlled most of the offensive early in the middle frame and left the Huskies scrambling to pull together some attacking plays. Even an NU power play proved unable to produce anything other than a few redirected shots on Hawkey.

It looked as though the Huskies were stuck in a rut, leaving them scoreless halfway through the second period. Even the Big Three — Sikura, Nolan Stevens and Adam Gaudette — were finding it hard to generate offensive plays with the Friars’ defense all over them.

Sikura and Providence’s Vincent Desharnais received matching minors for tripping and embellishment, leaving the players on the ice to play four-on-four, but the Huskies still weren’t able to generate any scoring opportunities.

Things changed when both men came off the bench, giving Northeastern the momentum it needed to kick things into gear in the offensive end. A scramble near the crease sent some bodies flying and ultimately landed Providence’s Jacob Bryson in the box with a hooking minor, putting the Huskies on their second power-play.

Hawkey crushed Northeastern’s hopes of lighting the lamp on the man advantage, coming up with two huge blocks on shots from Sikura and first-year Zach Solow to effectively kill the power-play.

Almost as soon as Bryson was out of the box, he was sent back in for high-sticking and the Huskies found themselves on another power play, which was again unsuccessful.

The Huskies were 0-3 on the power play for Friday’s game, an uncharacteristic statistic for the team whose power play was ranked fifth in the nation.

“We didn’t get the puck moving, but we had some looks,” Madigan said. “It just didn’t go, we were zero for three. You’re not going to get a lot of power plays in this game, and it just didn’t happen tonight.”

Turns out, the Huskies had been on the wrong side of the power play the whole time — their first goal came shorthanded at 18:06, a bar-down nip by Sikura.

There had been some roughing in the Northeastern defensive end which landed Erik Foley of Providence and NU’s Biagio Lerario in the box for hitting after the whistle, with Lerario serving an extra two for roughing. The Friars went on the power play in Northeastern’s defensive end, but the tables turned when Gaudette picked the pocket of a Friar and carried the puck over the blue line. Gaudette himself was unable to finish the shot, but Sikura took over and buried the puck bar-down in the net for the Huskies’ first goal of the game.

Back on the ice for the final period, the teams were knotted at one and the Friars were on the power play for a hooking minor on Jeremy Davies at the buzzer in the second. The Friars tried to tip the game back in their own favor, but Primeau knocked away two shots sent his way by Sukumaran to squash their advances.

Back at even-strength, second-year center John Picking fired the puck at Hawkey from the slot. Hawkey made the save but bobbled the rebound, giving first-year forward Austin Goldstein the perfect angle to bury his first collegiate goal in the back of the net, giving the Huskies a 2-1 lead.

Providence almost got one back later in the period, just under the midway point with a loose puck in the crease, but Primeau was able to get a glove on it before it got on a Friar’s stick.

The Huskies were still battling and trying to add another goal to cushion their lead as the clock ticked away. Sikura came close, firing his seventh shot of the night from the slot only to be shut down by Hawkey.

Primeau was still awake down the other end, redirecting pucks from Providence to keep the Huskies in the lead. The rookie, however, was caught off-guard by Kasper Bjökqvist, who took the puck from behind the net and tipped it up over Primeau’s glove for the game-tying goal with less than two minutes on the clock, ultimately sending the game into overtime.

The extra period seemed to be a mimic of the opening one, seeing zero shots from either team in the first few minutes of play. Both teams fired a few shots on goal, but the game-winning goal came at 9:55 from Providence’s Brandon Duhaime. Duhaime rocketed off a shot through a screen of both Huskies and Friars, leaving Primeau blind to the puck’s whereabouts.

With the end of Hockey East play, the Huskies move forward to focus on the NCAA Division I tournament, where they clinched a number three seed. The bracket for the playoffs was released at noon on Sunday during the NCAA Selection Showing.

Northeastern will face off against the University of Michigan in the first round of the tournament, playing in the Northeast region at the DCU Center in Worcester, Massachusetts. Puck drop is slated for 4:30 p.m. Saturday, following the game between reigning Hockey East Champions Boston University against Cornell University.