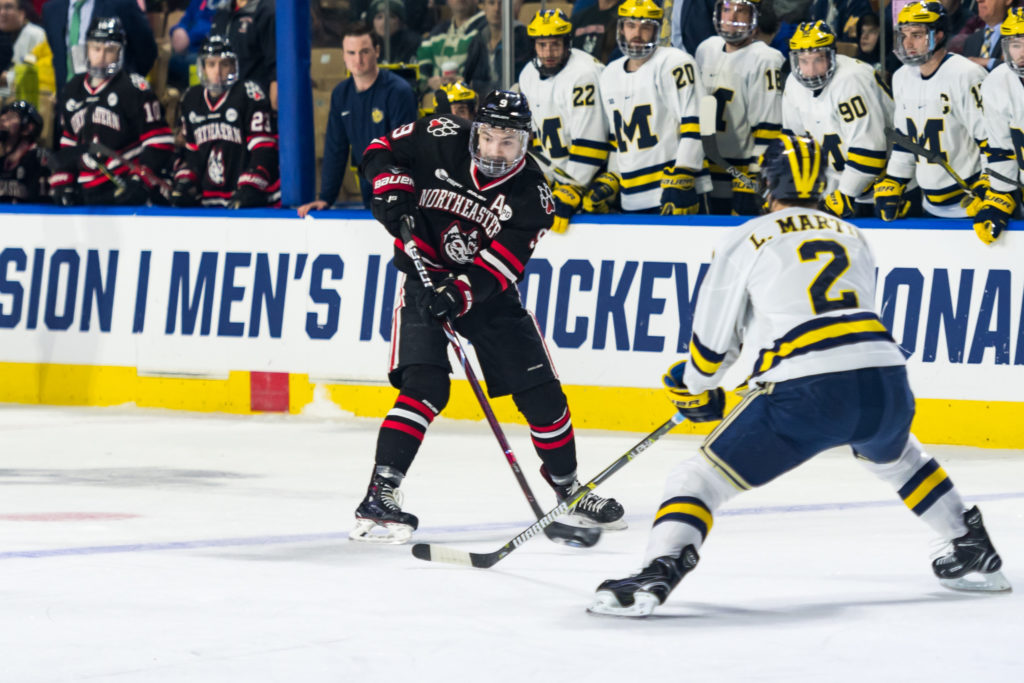 With hopes of turning their postseason around following a 3-2 overtime loss against Providence College in the Hockey East semifinals, the Northeastern Huskies headed out to Worcester, Massachusetts, for the first round of the NCAA tournament to face off against the University of Michigan.

No. 2 seed Michigan hosted No. 3 seed Northeastern at the DCU Center Saturday afternoon in what was a tantalizing 60 minutes of hockey, but would ultimately end the Huskies’ historic season with a 3-2 loss.

“They were better than us tonight, plain and simple,” head coach Jim Madigan said. “As much as this stings — and it does sting, there’s a major void there because of our expectations of moving on — nothing will take away or diminish the fact that they made their mark on our program and our university.”

The loss marks the end of a tremendous season for Northeastern men’s hockey, one distinguished by a Beanpot championship, two Hobey Baker finalists, Hockey East’s goaltender of the year and the winningest senior class in program history with 79 wins.

“For the future, you’re not going to talk about your individual stats or your goals or assists,” captain Nolan Stevens said. “I was fortunate enough to be a part of the 2016 Hockey East [Championship] team, and we won a Beanpot this year so that’s all we’ll talk about in the future and I’m just proud to be part of those teams… I’m proud to be a member of this class of ‘18.”

The Huskies and the Wolverines were neck and neck from the first puck drop, with both teams eager to gain a leg up over the other. The first 20 minutes of play saw scoring opportunities from both sides, but neither team was able to capitalize.

Michigan second-year goaltender Hayden Lavigne blocked a one-timer early on from third-year Eric Williams, who was stationed just below the blue line. Despite efforts to stuff the puck past when the keeper bobbled the save, the Huskies weren’t able to score.

Northeastern went on the power-play with 3:43 on the clock in the opening period following a tripping minor on Michigan’s Jake Slaker. Fourth-year winger Dylan Sikura sent a wrister from the top of the left face-off circle to get the power-play going, but it was gloved down by Lavigne. The power-play unit had a few good looks during the two-minute Michigan penalty, but ultimately couldn’t get anything past Lavigne.

Heading into the second period still scoreless, Sikura tried to set up third-year forward Adam Gaudette for a quick goal to get the Red and Black on the board, but they weren’t able to get past Michigan defense.

On the other end, Cayden Primeau was coming up big in net, putting a stop to anything that came his way. Slaker came across the blue line with a breakaway, but Primeau was ready and put a stop to it.

Things started heating up on the ice as the clock ticked down in the second. Both teams, still locked in a scoreless tie, were desperate to get on the board first.

Fourth-year defenseman Garrett Cecere fired off a rocket from the blue line, ricocheting off the post loud and clear. Primeau followed up Cecere’s almost-goal with a jaw-dropping save, robbing Michigan’s first-year Michael Pastujov with a swift leg save. The rookie made back-to-back saves all over the crease, tossing out his right leg to block a wrister from Michigan’s Cooper Marody.

Second-year forward Matt Filipe came right off the next puck drop with a breakaway, ripped shot on Lavigne, but came up short as the second-year goaltender got a glove on it. The game remained scoreless.

Michigan was first to get on the scoreboard with 4:57 to go in the second. Marody took the puck out to the right face-off circle before sending it straight over Primeau’s leg pad for the first goal of the game.

The Huskies weren’t down for long, tying the score just three minutes later on a power-play. Michigan’s Brendan Warren was sent to the box for hooking, and Northeastern’s power-play unit did what it does best — score.

Jeremy Davies received the puck from fourth-year captain Nolan Stevens in the slot and found Dylan Sikura backdoor for the Huskies’ first goal of the game and the senior’s 22nd of the year, a career-high.

The tally was also Sikura’s 14th power play goal, the most in the nation. Finishing up his four years at Northeastern, Sikura earned a spot on the all-time scoring list as the 14th highest scorer in program history, with 146 points in 137 career games.

The roles were reversed less than a minute later, with Stevens shown to the penalty box for goaltender interference with under two minutes to go on the clock. Michigan rocketed off a shot early on in the power-play, but the final minute of the period was controlled by the Huskies.

Coming back onto the ice for the third period, the teams were deadlocked at one and the captain was finishing off 36 seconds in the penalty box for interference.

Back at even-strength, things became physical between the teams. Gaudette fought his way through Michigan defense and into the offensive zone, but was tripped up in front of the crease and sent hurtling into the net, knocking it off.

Michigan once again broke the tie less than six minutes into the third period. Dexter Dancs pulled his team ahead with a backhand, beating Cecere on his way to the net to hammer one home past Primeau.

Down by two, the Huskies were hungry to come from behind and make a comeback. They managed to do just that at 12:01 with a rocket from Eric Williams. Williams fired a slapshot from the boards just below the blue line and buried one top shelf over Lavigne, keeping the Huskies in the game with their second goal of the night.

The Wolverines struck back with another goal of their own with less than five minutes on the clock, taking a 3-2 lead with Marody’s second of the night. Tony Calderone carried the puck into the zone and found Marody on the doorstep, who sent it just under Primeau’s pad for what would become the deciding goal of the game.

Despite their best efforts, Northeastern, who had bounced back from two one-goal deficits already, could not find the momentum to make a third comeback.

“Sport is great and this sport is tremendous, but it comes to an abrupt ending for one team,” Madigan said. “One team moves on and for [the other team] it’s like, ‘Woah’ and the curtain closes, and we’re faced with that right now and it’s a sad locker room.”

With the end of the season, the Huskies will send off their six seniors — Sikura, Stevens, Cecere, Trevor Owens, Jake Theut and Patrick Jordan — and conclude this memorable season with the winningest class in program history.

Moving forward, Sikura has signed an entry-level contract with the Chicago Blackhawks and is expected to be in the lineup as soon as Thursday.

Coach Madigan thanked the eldest players for all of their hard work and sacrifices in a teary-eyed address at the post-game press conference on Saturday.

“From my end, as the coach of this group of young men, I couldn’t be more proud and pleased for how they represented Northeastern,” Madigan said. “I drank the Kool-Aid long ago, in 1981, and it’s all about the institution and these gentlemen represented our institution really well for the last four years. So for me, [I’m] just proud and pleased that they’re going to be moving on to the next step in their career and proud of the fact that they’re going to be graduates of Northeastern University.”