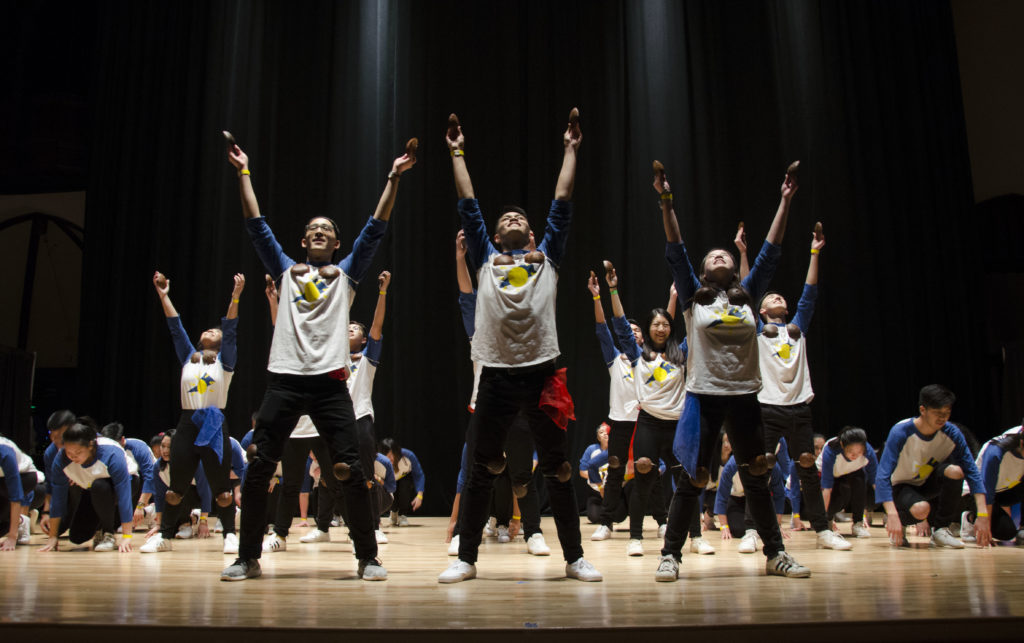 Dancers pose during the finale. / Photo by Samuel Kim

Barkada. You may recognize that word as the name of Northeastern’s Filipino student organization. It means “a group of friends” in Tagalog, the national language of the Philippines. It also reflects two central aspects of Filipino culture that the club was founded on: fellowship and unity.

Every year, Barkada puts on a culture show called Bahay Kubo, which is Tagalog for a “simple one room hut.” This year’s Bahay Kubo, which attracted nearly 300 students and alumni attendees to the Fenway Center, was complete with a mix of modern and traditional dances. The show also featured musical performances by Jeremy Passion, Filipino-American songwriter, and Iskwelahang Pilipino, an ensemble that plays traditional Filipino music.

“Our culture shows are named Bahay Kubo, because [it] Bahay Kubo reflects how we’re all one big family,” said Escaba, a third-year computer science and design combined major.

Escaba also said Barkada’s logo itself is a Bahay Kubo, the symbol of family, unity and hospitality.

“Our logo itself is the flag of the Philippines encased in a Bahay Kubo, which symbolizes hospitality,” Escaba said. “Family and friendships are so important to Filipino culture, so we wanted to emphasize those values as we put on a show that traced back to Barkada’s roots.”

The show centered around a skit that was modeled after the movie “Bill and Ted’s Excellent Adventure.” In the movie, two people traveled back in history and brought the people they met back with them.

In honor of the era when they were founded, Barkada members wore shirts reminiscent of the 90s. The shirts were blue, white and yellow and with “Barkada” and “98” written on the back. A sun graced the front of the shirts.

Mia Narciso, a second-year English major and an active member of Barkada, said she appreciated the significance of the shirts.

“The ‘98’ on the back is in honor of our 20th anniversary, and the design in front is supposed to be like the Philippine flag with the sun and the colors,” Narciso said. “It’s also inspired by the ‘90s aesthetic, because the theme of the show was not only about what Barkada means to us, but also to celebrate our founding and time travel.”

The skit was also designed so the audience would experience the history and culture of the Philippines. It followed two first-year students, played by freshman representatives Aya Aragon, a bioengineering major, and Lauren Bough, an international affairs major. The two hesitantly joined a dwindling Barkada, then were encouraged to find people willing to teach traditional dances for the upcoming Bahay Kubo.

The two then traveled back to the Philippines’ past and met someone who knew a different form of traditional dance. They encouraged the person to join them and help teach the dance to people in Barkada.

After each encounter, Barkada members performed the dance that the characters agreed to teach. There were six dances in total, which included Pandanggo Sa Ilaw, a Spanish-influenced dance involving candles that mimic fireflies. Other dances included Maglalatik, which involved dancers clicking coconut shells together, and Tinikling, which involved dancers intricately stepping between moving bamboo rods.

Bobo Chiu attended the show to learn about Filipino culture and watch her friends perform.

“All the different dances and the musical performances helped me to understand more about the history and rich culture of the Philippines,” said Chiu, a fifth-year chemical engineering major. “My favorite part of the night was the Maglalatik, the dance with the coconut shells.”

Filipino-American singer Jeremy Passion sang some of his songs about family and friendships, including “Lemonade.” Passion said he enjoyed Barkada’s welcoming atmosphere.

“Seeing everyone here tonight act as one big family, including all the alumni who came back, was awesome,” Passion said in an interview with The News after the show. “It’s also so amazing to see that people are still preserving our unique Filipino culture. I’m so proud of these students for putting on such a great show, and I was honored to be a part of it.”

After the traditional dances and the performance by Iskwelahang Pilipino, which involved traditional instruments including the mandolin-like Bandurria, nearly 70 members of Barkada gathered together on stage for the finale.

The final performance reflected when the two freshmen brought everyone back to present-day with the time machine, just in time for Bahay Kubo. The finale included modern dance moves and traditional dance moves from the previous performances.

“We all danced as one big family,” said Chichioco, a second-year biochemistry major. “Everyone was smiling and so happy the whole time. We all had so much fun, and I am proud of how smoothly everything went.”

Escaba also performed in the finale and other dances, including Bulaklakan, a dance involving large flower wreaths. Escaba said Barkada’s diversity is one of her favorite things about being the vice president of the organization.

“We have so many people in the club and people who participated in Bahay Kubo who are not Filipino, and its just so amazing to see that,” Escaba said. “It’s lovely how everyone, regardless of their heritage, embodies and celebrates family and friendships in the same way Filipinos in the Philippines would.”

Barkada members reflected this bond as they all shouted “Bahay Kubo” to conclude the evening.