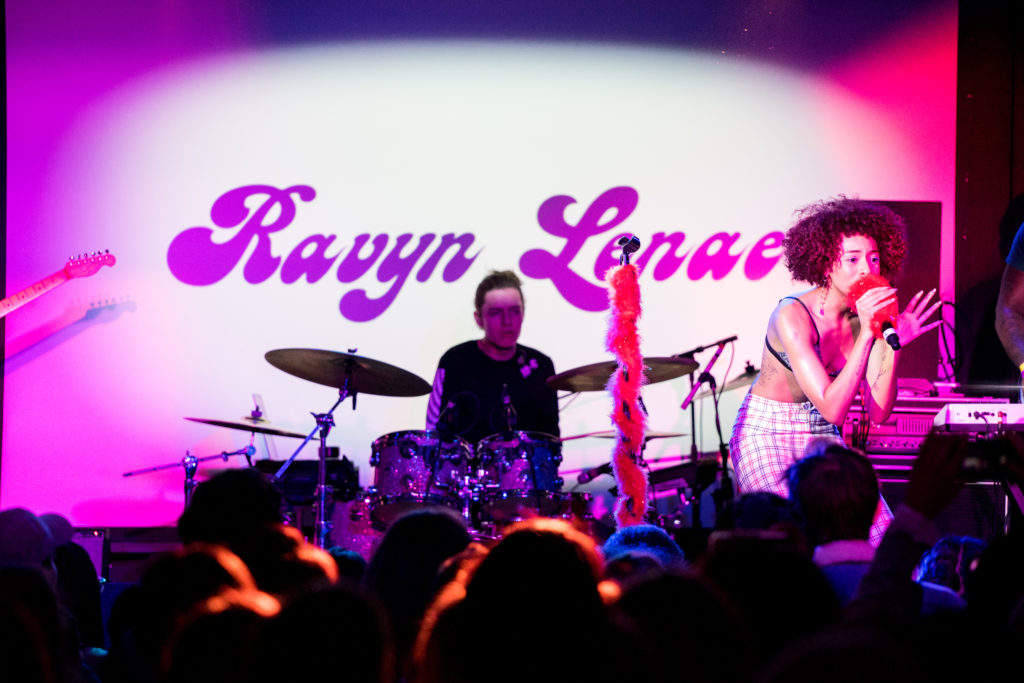 A day after her first headliner show at The Middle East Nightclub’s Sonia venue, Ravyn Lenae played an AfterHours concert Thursday alongside openers Asoh Black! and sndwn. Hosted by the Council for University Programs, the show was free to all Northeastern students.

Soundcheck started at around 6 p.m. though people remained, grabbing coffee at the connected Starbucks and hanging out in the venue with laptops open until they were ushered out leading up to the 7 p.m. performance.

During her act, Lenae performed every song from her recent Crush EP and some older songs from the Moon Shoes EP, such as “Free Room (feat. Appleby).”

Colin Bermann, a second-year environmental engineering major, is a recent fan of Lenae’s; he listened to her music before the show on streaming services, but got most of his exposure from the AfterHours show. He called her music something close to R&B soul singing.

“She was fantastic,” Bermann said. “Her songs are generally good — some of them can be a little bit more avant garde than typical R&B songs. She has insanely high range and she plays around with that a lot which was cool. I’d definitely go again.”

Sean Holahan, a fifth-year computer science and interactive media combined major, was among the crowd to see Ravyn Lenae. He found her on Soundcloud after she released her Moon Shoes EP two years ago and is a “big fan.”

“Ravyn had moments where she would go off on these alternate routes, different ways of harmonizing and playing to the music, experimenting when she’s playing live,” Holahan said. “It’s like Amy Winehouse, she never really sang the same thing twice, if you know what I mean.”

Bermann noted Asoh Black!’s “commanding stage presence,” highlighting a short section of the show in which he rapped a capella.

“I would say what I’m going for is kind of a neo-funk, futuristic-type rap,” Asoh said. “Music with a message that also makes you want to get up and dance — feel good rap.”

When asked whether he is a Ravyn Lenae fan he said, “I mean I [expletive] sure am now.”

Asoh Black! and sndwn. are part of a collective called Free.All.Mind$, based out of Brooklyn. Members of the collective were originally high school friends and say they aren’t a rap group per se.

Lenae has roots in a Chicago-based collective called Zero Fatigue but has been releasing music independent of them for a while.

For the last 10 weeks, Asoh has been releasing one song every week as part of a music series called “Asoh Attacks.” The 11th and final one should be dropping any day now. After that he will be focusing on making visuals for the songs as well as booking and performing more shows.

Asoh said the next thing he’ll be working on will be a full-length project. He wants to make a “timeless piece of creation” and influence people the way he has been influenced. He mentioned he’d like it to be something like Kanye West’s “The College Dropout” — “fluid and conceptually jarring.”

Asoh said the crowd at AfterHours was there with the intention of vibing. People weren’t stiff, and he said the audience was a good one.

Asoh said he took note of how Lenae interacted with the crowd and organized her setlist. For his acts, he usually just lets songs bleed into each other.

“What she did is after each song she sort of talked to the crowd, gave it a background,” Asoh said. “It brought structure to her performance and that’s something I could pick up. Just her intimacy with the crowd and the way she performed — I thought it brought a different level to her aura.”