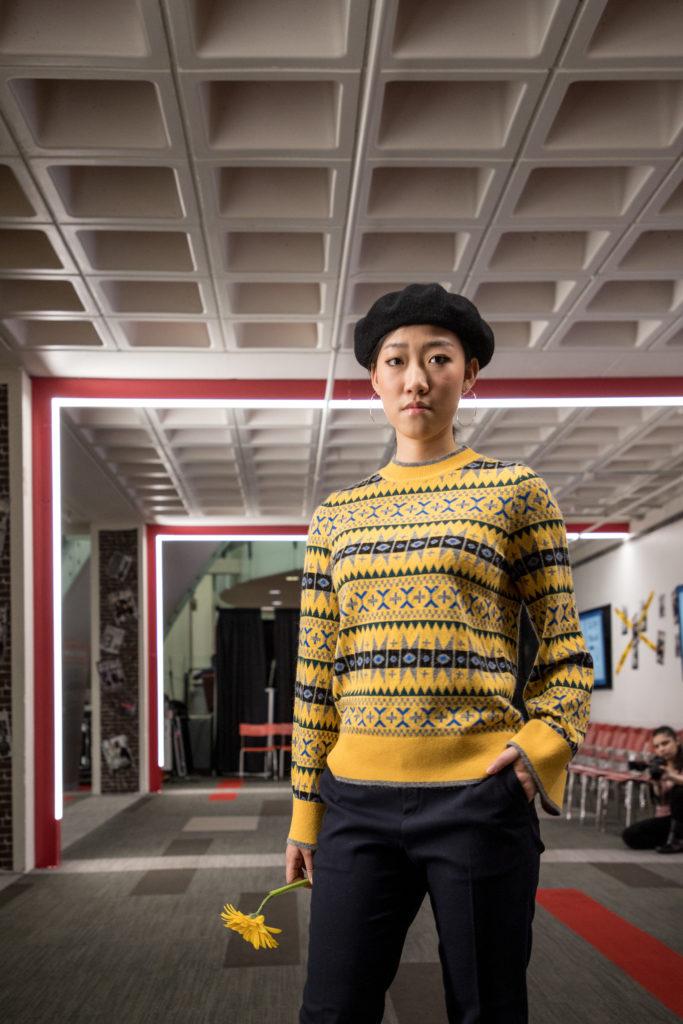 A model poses for the camera. / Photo by Riley Robinson

The show featured two major looks: one clean and classical, and the other edgy and grunge, said Fashion and Retail Society President Kaan Donmez, a fifth-year business administration major. The social movement by the mods and rockers, two conflicting 1950s British youth subcultures, inspired the show, called “Battle of the Wild Ones”.

“Most of the clothes came out of the students’ closets, so from places like H&M or Zara and Boston’s numerous thrift shops,” Donmez said.

Donmez said the two ‘50s groups were seen as troublemakers, which was reflected through runway models’ powerful, bold and unique walks. The organization wanted to diversify and modernize the show by illustrating how millennials are evolving fashion to defy societal norms, Donmez said.

“We don’t want to do what’s been done,” Donmez said. “We want to make more [fashion] that’s modern and new. Teens want to take power in their own hands, show other generations we won’t stand by societal norms.”

The models walked down a ramp and then paused to pose for the audience in four different sections of the quad so the entire audience had a chance to admire the artists’ creations. The rocker models and mod models alternated on the runway, and each model wore three or four different looks, including individual styles of makeup for the rockers and mods.

“For the mods, we did classic, sleek lines and kept it basic,” said makeup artist Michelle Meredith, a first-year computer science major. “Then for the rockers, we did dark lips and smudged eyeliner, going for that grunge kind of look.”

This is the first year the Fashion and Retail Society has held its fashion show in Curry’s indoor quad. Donmez was excited to move the show from its usual locations in the Curry Ballroom or the Fenway Center, which had the fashion industry’s trademark catwalks.

“This year we’re using the natural sitting area in the indoor quad — using the bleachers. Now it’s going to look more like New York Fashion Week,” Donmez said. “It’s going to be more attractive and we’re going to have the models walk through the seats. It’ll feel more interactive because there won’t be a stage or a catwalk.”

Nina Joory, a Brazilian and Swiss singer from Berklee College of Music, entertained the audience for the halftime show. She sang “New Rules” by Dua Lipa and her original song, “Original Love.”

“We’re more of a business fashion club. We do events and bring professionals and give people opportunities,” Donmez said. “We wanted to give people roles in fashion; we are not making clothes.”

Donmez said the Fashion and Retail Society started planning this show in the fall. They selected the makeup artists and stylists and casted the models this semester.

This year, 60 models showed up to casting, and Donmez said they took 25. It was their biggest turnout.

“We look at different things,” Donmez said of selecting models. “We want to make sure the models are as diverse as possible. We want to represent Northeastern and all the kinds of people [here].”

Donmez also said the selection of models gets more refined each year.

“Every year, we bring the standard up to a different level,” Donmez said. “So, we want the models to be confident and fierce and walk with a passion.”

Frances McSherry, the club advisor, is working to foster a greater fashion community at Northeastern. She also works in student organizations like NU Fashion and The Avenue Magazine.

“Someday, [fashion] will be something all Northeastern students will be involved in,” said McSherry, a professional costume designer and theatre design professor at Northeastern. “Every year we have more students involved.”