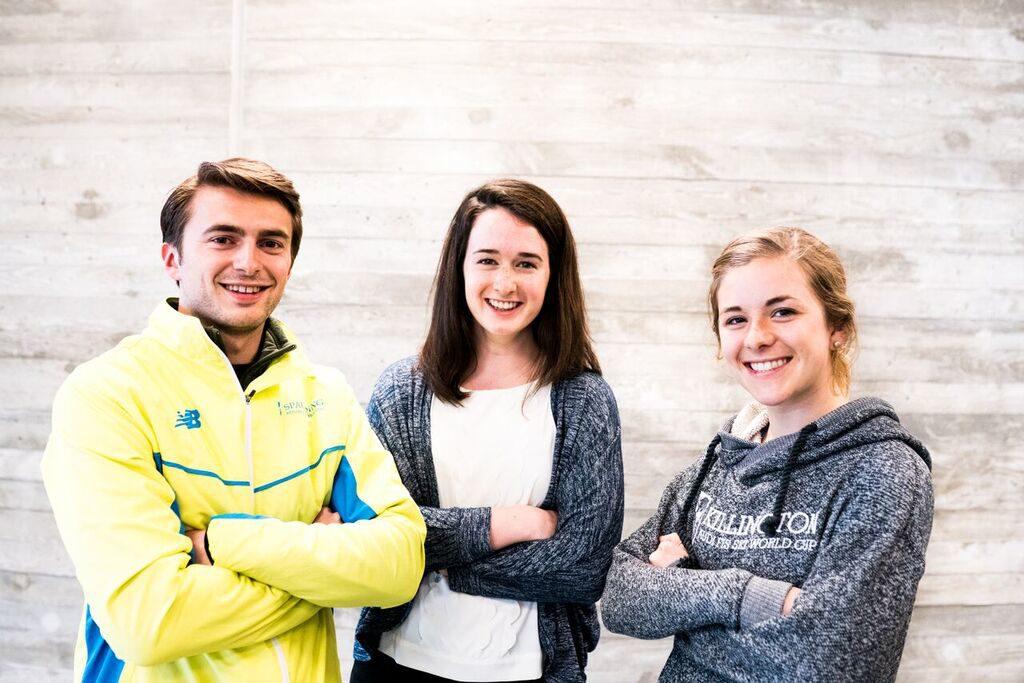 For some Northeastern students, the biggest challenge of the spring semester will come just before finals.

This year, Marathon Monday in Boston falls on April 16. It will be the 122nd running of the world’s oldest annual marathon, which ranks as one of the most prestigious road racing events on the planet. Runners from across the globe will travel to the Bay State to participate, but others will just make a short trip from Northeastern’s campus.

Erin Dillman started training more than a year ago when she decided to try qualifying for the Boston Marathon. To achieve that, she needed to run under 3 hours and 30 minutes for her first marathon in Providence, Rhode Island.

“Running Providence is probably one of the hardest things I’ve ever done, running-wise or otherwise,” Dillman said. “At least I know I can do it.”

Dillman is the president of Northeastern Club Running and is currently on co-op at BuroHappold. The community of runners she has grown to love here inspired her to go for the biggest race in the city.

“A lot of my friends [run],” said Dillman, a third-year civil engineering major. “It’s a great way to hang out with them.”

As far as training goes, running 60 miles a week and 20 miles on long days is incredibly taxing. The distance and time commitment is both draining and daunting, especially considering busy student schedules.

“You can’t really do a long run every day,” Dillman said. “You’ll get burnt out.”

For her and many others, exhaustion isn’t just physical. Chelsea Wojeski, a fourth-year industrial engineering major, has found training for her first Boston Marathon to be a test of self-motivation.

While on co-op at Apple in Cupertino, California, she made friends who can keep up for five miles, but the rest of the time, the only footsteps she hears are her own. She is alone with the challenge ahead of her, fueled by self-improvement and the idea of reuniting with her loved ones at the finish line.

“The main motivator for me is knowing that when I come down Commonwealth, my friends and family will be there cheering me on,” Wojeski said.

Like Dillman, Wojeski also qualified in Providence, but said she has missed the social aspect of training.

“When I was training for Providence, I always had people around me that were training, too,” Wojeski said. “Now, I’m on my own.”

While some runners experience a more independent journey leading up the Boston Marathon, others, like Mikey Maichen, find motivation from their family and friends and run in support of a cause close to home.

Five years ago, Maichen’s older brother was involved in a severe car accident and was comatose for some time. He stayed at the rehabilitation hospital for a few months before he was released.

“I’m running for Spaulding Rehabilitation Hospital Boston,” said Maichen, a third-year electrical engineering major. “My older sister has run in support of them before, and this year we are doing it together for the special nurses that work at Spaulding.”

The Maichen siblings will also be joined by their brother’s main physical therapy nurse as they run the 26.2 miles from Main Street in Hopkinton to Boylston Street in Boston. The family grew up in Natick, Massachusetts, and Maichen fondly remembers giving out water and oranges to marathon runners as they ran through his town.

“The marathon is always special for the Natick community,” Maichen said. “Whichever friends and family members that won’t be at the finish line, I know they’ll be there for us in our hometown.”

In addition to receiving support from his family and the Spaulding community, Maichen has found new connections within the Northeastern community, namely a friendship with his training partner Olivia Maeder.

Maeder, a third-year physical therapy major, was preparing for her first semester of college at Northeastern via the N.U.in Greece program when she learned there was a half-marathon in Thessaloniki, where she would be staying.

The day before she left for Greece, she got her feet wet by running her first half-marathon in her hometown of Manchester, Vermont. Maeder has since run the Vermont City Marathon twice. She finished in 3 hours and 20 minutes last year, fast enough to qualify for the 2018 Boston Marathon. Maeder had hoped to run the Chicago Marathon last fall, but because of a stress fracture in her leg she was forced to put that long-time goal on hold.

“Leading up to the qualifier, I was super excited,” Maeder said. “However, due to the stress fracture, I was unable to run the Chicago Marathon and now I’m super nervous.”

With a year between the last time she ran Vermont City and her upcoming run in Boston, it is getting harder for Maeder to find time to train, especially while juggling classes and the looming worry over another leg injury.

“The support from everyone is what is getting me excited,” Maeder said. “It’s a surreal feeling. I never imagined [qualifying for the Boston Marathon] would happen so soon.”

Seeing loved ones on Boylston gives many runners the emotional boost and adrenaline needed to power through the finish line. Maggie Simonds, a third-year health science major, hopes to run to help someone who can only hear the roar of the crowd.

Simonds applied to run as a sighted guide in the marathon with the Team with a Vision organization, which raises money for the Massachusetts Association for the Blind and Visually Impaired, a statewide network of vision rehabilitation services. Simonds became interested in the organization after serving as a teaching assistant at the Perkins School for the Blind in Watertown, Massachusetts, during her co-op last fall.

“I was looking for something challenging and the job description was something I saw myself doing. I was blown away by the experience. The four kids in my class changed my life,” Simonds said. “I cried in my interview. I met a student unlike I had ever seen before with  deformed facial features, yet he was the happiest kid I ever met.”

Simonds comes from a family of runners; her dad and brother both ran track in high school and college. Simonds remembers being inspired by the runners she watched with her dad while growing up in nearby Brimfield, Massachusetts.

Last year, Simonds finished the Vermont City Marathon with Maeder and described it as the hardest thing she’s ever done. When she ran the Cambridge half-marathon last fall, she ran behind someone wearing a shirt in support of Team with a Vision.

“I had heard about them before but looked them up when I got home, and saw that they incorporate two things I’m passionate about,” she said.

On the organization’s website, runners have the choice of running for Team with a Vision, which entails raising around $7,500 to get a bib, or to run as a sighted guide. With Simonds’ experience as a sighted guide for children on co-op, she felt she could also do it for adults on a marathon course.

On the application, Simonds had to include her pace, a pace she is comfortable being paired with and how much of the marathon she is willing to run. A huge part of the application included personality compatibility and situational questions.

“It wasn’t what I was expecting [to be asked] but I completely understand that you need be able to build trust with the person you’re guiding and have things to be able to talk about,” Simonds explained.

Simonds will not be notified if she has been matched as a guide until up to two weeks prior to the marathon. She disclosed that her training regimen is not as structured as some of her peers, and that she is just running to run.

“Either way I’m happy. I’d rather be paired with someone that is a perfect match,” Simonds said. “I’m just as happy making a huge poster and supporting Olivia [Maeder] and all the other runners. If I don’t do it this year, next year for sure.”