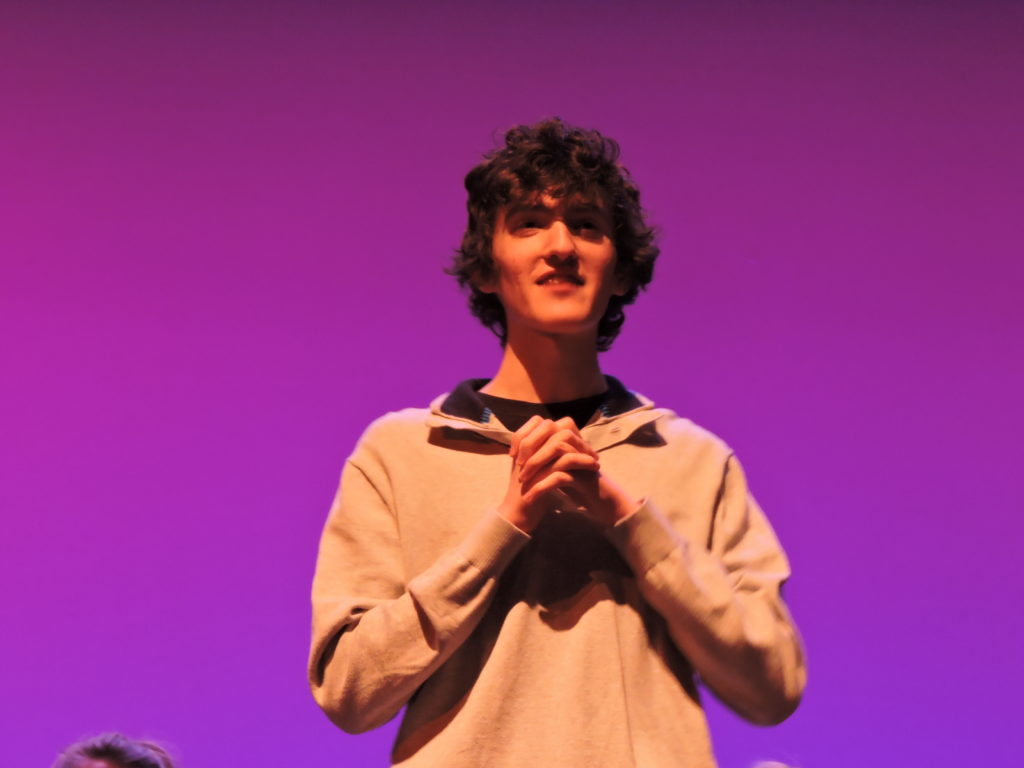 “I really like everyone who works for NU & Improv’d,” said Mitchell Donovan, a second-year bioengineering major who attended the show with his friend. “Over the few years we’ve been watching, we’ve really seen them grow and it’s really fun to see them on this bigger stage.”

The evening began when two NU & Improv’d members, Ethan Parets and Anton Monteleone, warmed up the crowd by asking for suggestions of locations, names, objects and actions. After that, Liquid Fun came on and played three different “games” as the improvisers refer to them.

These games included one called “Pan Right,” in which the group took audience suggestions like the words “penguin” and “Columbus, Ohio” and took turns making up a dialogue surrounding the words. When someone said “pan right,” the next person would continue where the last had left off.

After Liquid Fun was Seriously Bent, who also played three games before they introduced NU & Improv’d.

Audience members included Kathy Veazey, who is NU & Improv’d member Lily Armstrong’s mother and came all the way from Tennessee to watch her daughter perform.

“I just want to see these guys in action,” Veazey said. “I’ve seen a lot of stuff on Facebook and I’m glad to see it here.”

Many Northeastern students were also in the crowd, including Mareya Dick, a first-year international business major.

“This is my first improv event so I’m really excited,” Dick said. “I love jokes. I hope I get a cramp in my side tonight — that’s my goal.”

NU & Improv’d opened their portion of the show by playing a parody video set at a children’s park. In the video, all the members shared fake reasons for joining improv. One member said that if they did not have attention on them at all times, they thought they would die.

For their first skit, NU & Improv’d asked members of the audience to suggest a place people would gather. They went with “music festival” and proceeded to improvise a skit about festival-goers.

“I like all of the audience stuff, it changes every time,” said Carleigh Sussman, a second-year biology major. “I honestly think that the best part is them laughing at themselves.”

After a few more free-form sketches, the group did a parody version of the game “Jeopardy,” complete with a gameboard of humorous questions and hotel lobby bells used as buzzers. Members of Liquid Fun and Seriously Bent then joined NU & Improv’d onstage for a recurring sketch called “Sex With Me,” in which the group takes words from the audience and compares them to having sex. For example, NU & Improv’d member Lily Armstrong used the joke, “Sex with me is like Lincoln Logs… pointless.”

Other audience members included the parents, step-parents, grandparents and brother of Ethan Parets, one of the three troupe members performing in his last Beanpot.

“[Ethan’s] energy is just so great whenever he’s on stage,” said Noah Parets, Ethan’s younger brother. “I feel like I only watch him, it’s so great. I love it.”

“He makes me laugh and I just want to go up and hug him to pieces,” Mazer said.

The troupe ended the evening with a ten-minute free-form sketch completely based on two phrases from the audience; horse-race and peanut butter. The skit revolved around a duo that was stuck in purgatory until they could find peanut butter to offer to some of the people in heaven. At the end of the sketch, they made sure to thank the three performers who just had their last Beanpot, as well as plug their last event of the year which will take place next week in West Village.