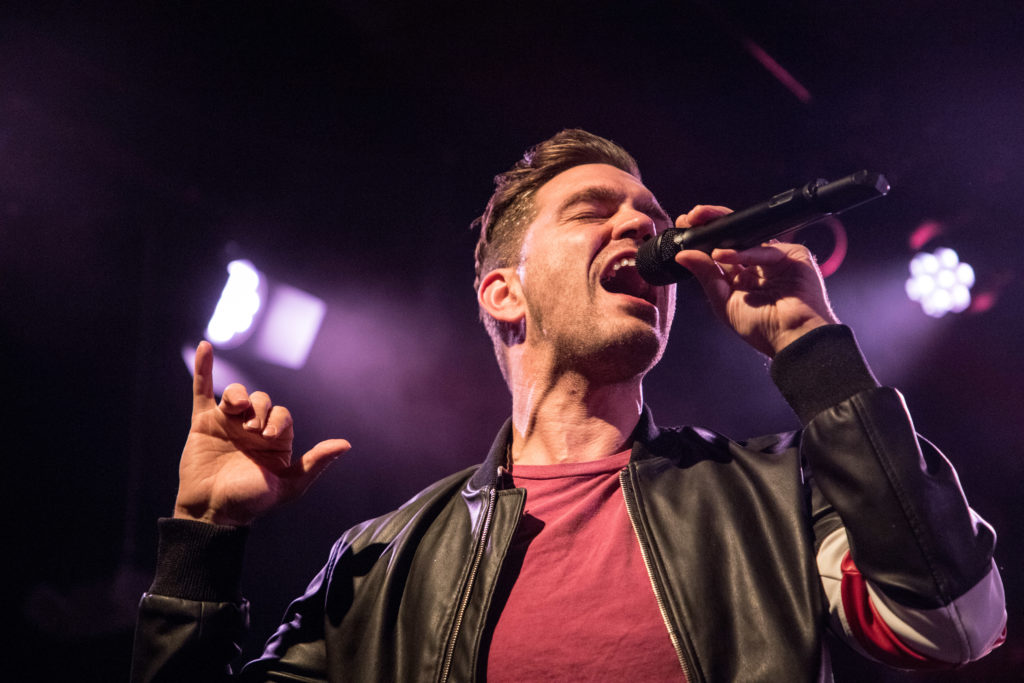 The marquee in front of Paradise Rock Club read “Sold Out” Friday night. Under it, hundreds ranging from elementary-age children to the elderly stood in a line that stretched down Commonwealth Avenue. They all awaited their chance to see Andy Grammer on tour for his latest album, “The Good Parts.”

Grammer, an American singer and songwriter producing soul and pop hits including “Fresh Eyes” and “Honey, I’m Good,” began his set with the energetic “Good To Be Alive (Hallelujah).”

The crowd jumped with enthusiasm as rotating lights flashed on Grammer and his tour members. Grammer, clad in a black leather jacket, leaped to the fast beat of the music. Guitarist Greg Karas and bassist Zach Rudulph riffed on their instruments and leaned on each other’s backs. Vocalists Loren Smith and Tia Simone clutched their microphones and tossed their heads, making their hair fly about. Doug Wayne pounded chords on his keyboard as Emmanuel Cervantes, or E-MAN, beat on the drums.

“I always love coming to Boston,” said Grammer, who performed at the MixFest festival in September 2017. “I had lobster earlier today — it wouldn’t have been a trip to Boston without lobster.”

To this, the audience cheered and laughed, and Grammer fed off their energy by going into another feel-good song, “85,” from his new album. College students sporting glow-stick necklaces headbanged while middle-aged women holding drinks from the bar danced. Young children clapped their hands as they beamed with happiness and sang along to the catchy lyrics.

Before Grammer performed, James TW, a 20-year-old British singer known for soulful songs including “When You Love Someone,” opened the evening.

James TW captivated the crowd with his powerful and stirring voice. He was accompanied only by his guitar and keyboard, yet his songs about love, relationships and family drew loud cheers from the supportive audience.

Before James performed “When You Love Someone,” he explained that he wrote the song after he learned that one of his music student’s parents were about to split.

“I wrote this song for him, because I know he was about to go through so much,” James said. “I wanted him to know I was there for him, and that someone was thinking about him.”

James ended with “Different,” an uplifting song that encourages listeners to just be themselves.

“I love that you’re different, please don’t change,” he sang to the audience as they waved their arms back and forth.

While James TW delivered a soulful and emotional lineup of songs reminiscent of his musical influences Ed Sheeran and B.B. King, Grammer kept the atmosphere in the packed venue spirited through lively songs such as “Back Home” and his more somber songs such as “This Ain’t Love.” He even performed a slam poem he wrote titled “My Father Does Not Care.”

“See, my father does not care about anything but my heart,” Grammer said. “He knows that wealth and worth have always been super far apart … I’m pretty clear on how to get my father’s attention now — I’ve gotta be of service for others, that’s how.”

Before he performed “Spaceship,” Grammer explained it was about his love for his eight-month-old daughter Louisiana.

“I always sang to my baby girl when she was in my wife’s belly,” Grammer said. “I wanted her to know that her daddy loved her.”

Grammer ended the night with “The Good Parts,” the namesake for his album and tour. Before he started the song, he thanked the audience.

“All of you here tonight are full of sunshine,” Grammer said. “Don’t turn your sunshine down. Your uniqueness is your strength and your vulnerability is the gift you give to others.”

Audience members swayed their bodies and arms as they sang the last lines of the song with Grammer.