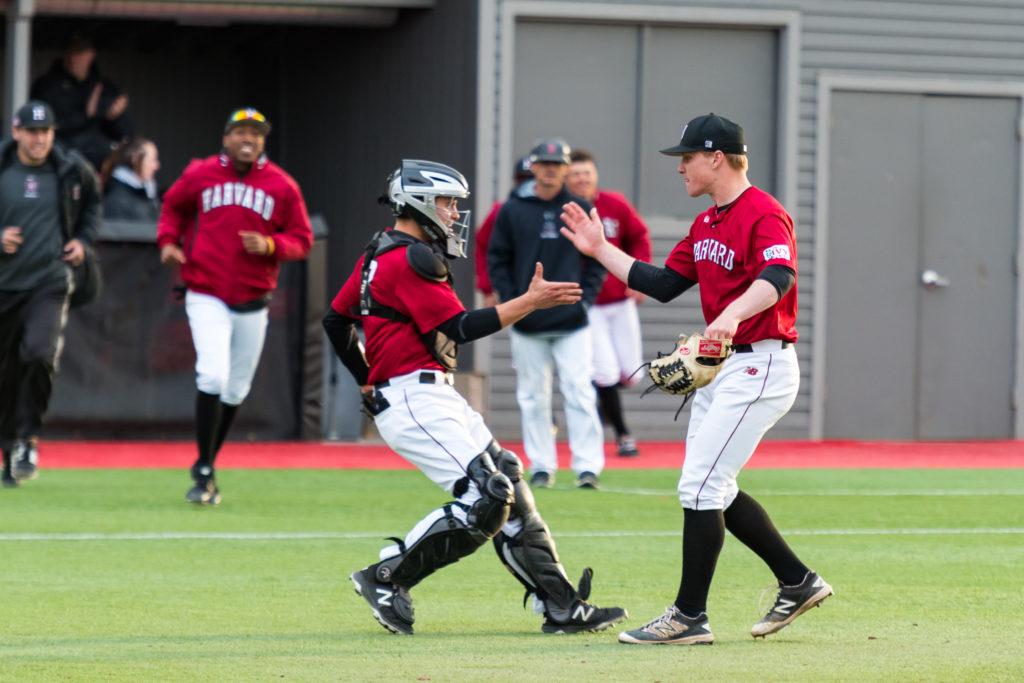 Northeastern baseball’s Beanpot drought will continue for another year, as the team took a tough loss to Harvard University Tuesday at Friedman Diamond. The Huskies, who last won the tournament in 2013, lost 8-6.

The Huskies started the game strong, taking a 6-0 lead in the first inning after First-year pitcher Sam Jacobsak shut Harvard down with the help of the Huskies’ strong defense in the top of the first.

NU capitalized on some untuned early pitching by Harvard’s Kevin Stone, stealing a handful of bases and a grand slam by second-year Kyle Peterson to establish a substantial lead.

“It definitely let us get a bit too comfortable, as you can see we didn’t score the rest of the game,” Peterson said. “Looking back, we should’ve kept our foot on the pedal but unfortunately we didn’t.”

Harvard scored twice in the second inning in an attempt to close the gap, but still trailed 6-2.

Following a scoreless bottom of the second, Glavine removed Jacobsak for another first-year pitcher, Brandon Dufault. The top of the third inning was momentous for Harvard, as they turned the game around and took an 8-6 lead, partially fueled by first-year Buddy Mrowka’s triple.

After another scoreless inning, the Huskies put fourth-year Brian Christian on the mound and kept Harvard from advancing their lead in the fourth.

NU threatened in the fifth; after a single by first-year Ian Fair and walks to Peterson and fourth-year John Mazza, fourth-year Mason Koppens stepped in with the bases loaded and two outs. However, the opportunity was not fruitful for the Huskies as they again could not score.

“We lost focus at the plate and we lost some focus on defense and on the mound and I give Harvard all the credit for not letting a six-run first inning bother them at all,” head coach Mike Glavine said.

NU kept Harvard off the board for the remainder of the game, utilizing more pitchers as both third-year Andrew Misiaszek and second-year Kyle Murphy took the mound. But the refusal was mutual, as Northeastern was unable to tie the score.

“We didn’t quit on the game or anything like that, not even close. We just lost some focus and had a chance to put them away and we allowed them to stay into it and I’ve got to give them all the credit,” Glavine said.

Despite the loss, Glavine noted that this game was an important learning experience for the team.

“I think overall we need to learn from a day like this,” he said. “That’s playing all nine innings, that’s respecting the game, that’s if you score in the first you’ve got to try to score in the second, third, fourth and all the way through and if you’re on the mound you’ve got to shut down innings and put the other team away.”

The team will travel to South Carolina this weekend to play the College of Charleston. Glavine said this will be a good opportunity for the team to reset from their loss to Harvard.

“This loss hurts, and I hope it hurts our guys to see another team celebrate on our field when we know we felt like we had a good chance to win,” he said. “You learn from it, you let it sink in and hurt, and then tomorrow we travel to South Carolina.”

In terms of their ability to rebound and get back on their game, the team knows that this shouldn’t be an issue.

“We’ve just got to reset ourselves. We can’t let this game carry forward,” Peterson said. “We’ve bounced back from losses before and we look forward to doing that this weekend.”