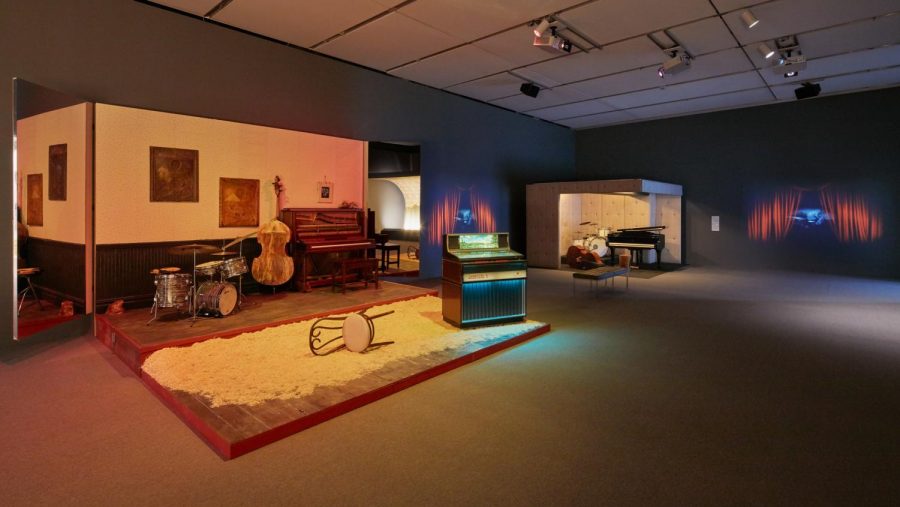 On the first Friday of each month, the Institute of Contemporary Art, or ICA, a modern art museum, hosts a themed event from 5 p.m. to 10 p.m. This month’s event on Jan. 11, Jazz Night, featured the Lemon Trio jazz group and celebrated the last week of the Jason Moran exhibit.

While most art generally only appeals to the viewer visually, the Jason Moran exhibit also incorporates an audio element. One room dedicated to Moran’s work displayed projections of prominent jazz figures accompanied by music from self-playing jazz instruments celebrating New York jazz from 1964 to the early 1970s.

The ICA hosted similarly modeled events in the past, but it was the museum’s first Jazz Night, so the staff did not know how many visitors to expect.

“I think this is probably popular because it’s the last week of the Jason Moran show,” said Michaela Bubier, ICA events coordinator. “It’s kind of a closing reception.”

Bubier is responsible for all internal events including openings for exhibits and public programming such as Jazz Night. Bubier, along with other staff, did not anticipate the immense turnout, so they turned some visitors away when the event reached capacity.

Bubier said she aims to make these events inclusive by inviting a diverse crowd into the space.

“I want to make the arts a safe and accessible space that anyone can feel like they can walk into,” Bubier said. “It’s great that we have an incredibly diverse demographic. We have young people, some older people here tonight which is pretty cool, so I’m thrilled.”

ICA Member, Laura Ravaioli, a Jazz Night attendee and the parent of an NU student, highlighted that the First Fridays events tend to attract more people and the museum struggles to manage the crowd. ICA members have certain privileges including expedited access to events like this one. However, most attendees cannot enjoy this luxury.

Ravaioli expressed that the event was an overall success, but hopes that in the future the coordinators solve the issue of people waiting outside, so everyone can have a more enjoyable experience.

“[There were] a lot of people in the freezing cold waiting, and it’s not something that had the success of the night,” Ravaioli said.

The jazz band was also surprised by the overwhelming turnout at the event. Lemon Trio performed in the theatre overlooking the Boston Harbor. The group, comprised of Cooper Evans, Aubrey Situmorang and Matthew Okun, made their debut at Jazz Night.

The band members were surprised that their music got so much attention, as they expected to be background music at the event.

When audience members began to interact with the music, Evans was especially thrilled.

“There were a bunch of people who were doing swing dancing and that was really fun, and there was a guy at the end doing this cool, loose dance that I was into,” Evans said.

The Jason Moran exhibit ends on Jan. 21. The next First Fridays event, themed “Red Hot,” is on Feb. 1 and features salsa and samba dancing performances.