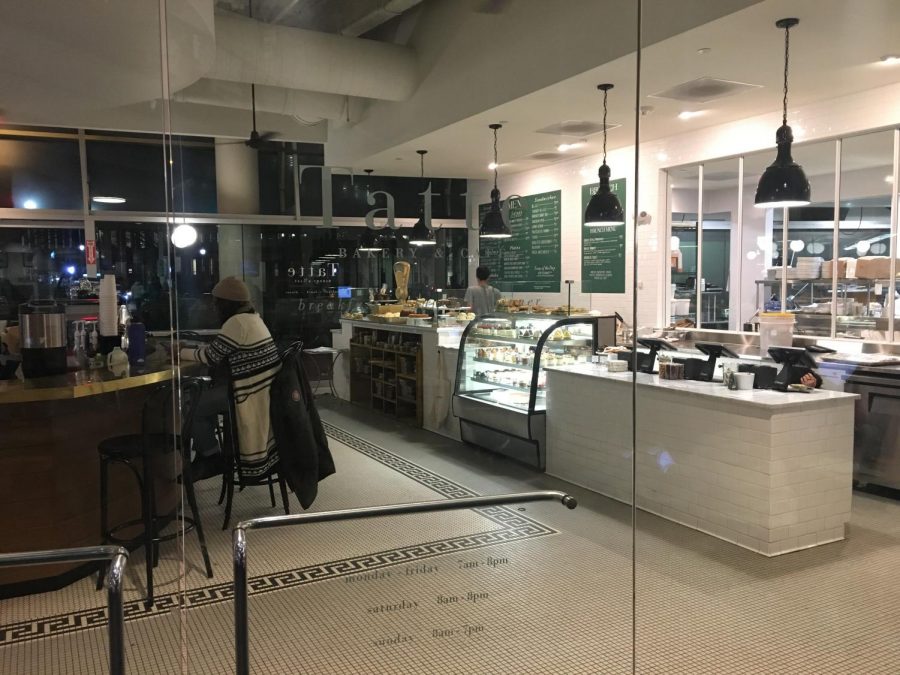 Tatte's Northeastern location is a popular spot among students.

What started as a home kitchen project in 2007 has blossomed into a successful bakery chain that has spread across the entirety of the Boston area, and recently into Northeastern’s Marino Recreation Center.

Tatte was founded by Tzurit Or in 2007, when she decided to take her love for baking and turn it into a business by selling pastries at local Boston farmers markets. After just one summer of work, she gained enough funds to open her first cafe in Brookline.

Since then, 10 new cafes have opened across the Greater Boston area, including one right in the heart of Northeastern’s campus — the chain moved into the space in Marino formerly occupied by Au Bon Pain. The Tatte fleet consists of six locations in Boston and four in Cambridge, as well as the original cafe in Brookline.

According to its website, Tatte’s goal is to create a unique experience and atmosphere, and Or has tried to replicate this throughout each location. Some students at Northeastern University have great things to say about the bakery and what it provides.

“We’re here all the time. We both live right across from here so it’s super accessible,” said Ximena De La Mora, a first-year economics and philosophy major, about herself and her friend.

While the Northeastern Tatte seems to be primarily occupied by students, professors at Northeastern also enjoy the bakery in many of its other locations.

Professor Hicham Fenniri, a professor in the chemical engineering department who occasionally visits Tatte in Harvard Square, said “[It is] very good, very high-quality food. I really like it. It’s like a Panera but on steroids.”

The love for the bakery seems to stem from Tatte’s high quality of food. Pratik Jain, who has been working at the Northeastern Tatte since its opening in August 2018, explained how Tatte maintains this fresh reputation.

“None of our bakery dishes, or our food and menu dishes are a day old,” Jain said. “Everything is fresh. Everything comes in the morning from our main bakery and then they throw it away in the night so nothing is being used for the next day.”

However, the high-quality dining that Tatte provides comes at a cost. People like Fenniri worry that putting Tatte in the middle of a college campus could be a bad choice.

“It is not a cheap place compared to other restaurants,” Fenniri said. “I am not sure how many students can afford that kind of food on a daily basis, or even occasionally.”

It is very apparent that Tatte is not a place for someone looking to grab something cheap. The bakery charges $9.50 for a breakfast sandwich, and their plates are $9 or more. Tatte’s maximum price tops out at $14.50 for a Lamb Meatball and Labneh Shakshuka. The Marino Recreation Center’s former tenant, Au Bon Pain, charges between $6 and $8 for sandwiches.

Some students at Northeastern refrain from going to Tatte because of their premium prices.

“It’s super nice, I love the aesthetic of the place. But it’s close to $5 for an iced coffee,” said first-year chemical engineering student Jacob Abarbanel. “When [my friend] asks me to go with him, I sometimes hesitate because it’s just a lot of money.”

“It tends to be tough to accommodate freshmen that lack financial stability,” he said.

On top of this, students at Northeastern find the seating arrangements to be concerning. “I just wish that they had bigger tables,” said Vania Alvarez Murakami, an undeclared first-year student. “But it also gives it a cozy vibe.”

“I got a position to work at one of [Tatte’s] management consulting firms because they came into Tatte and they liked my gesture and they liked the way I was talking,” he said.

While the prices are above average, and the tables are small, the environment and high-quality food that the bakery provides appear to be the reason why it is so successful.