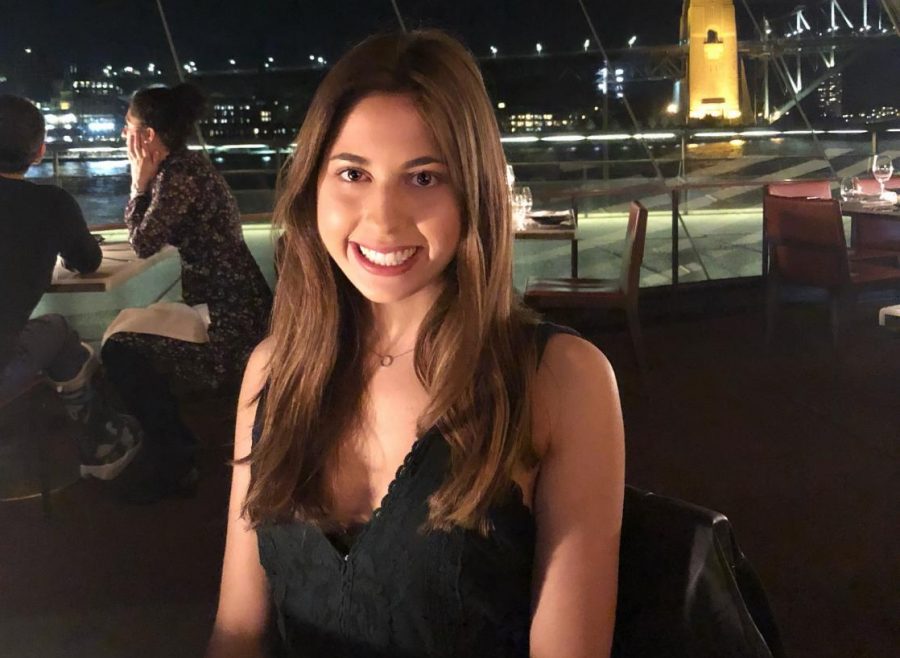 Lauren Barbulescu, a first-year English and communications studies combined major, poses at the Sydney Opera House during her N.U.in semester in Australia.

They lived abroad for nearly four months and learned how to function as adults in a different country without their friends and family. However, to many N.U.in students, the transition from high school to living abroad was nothing compared to the one they are dealing with now — integrating into Northeastern’s Boston campus.

Since 2007, more than 6,500 students have participated in the N.U.in program. The first week of January saw 1,170 N.U.in students arrive on campus, eager to start their first semester at Northeastern, said Sylvia De Witt, a senior data analyst at Northeastern. These students began their college careers in Canada, England, China, the Czech Republic, Germany, Italy, Greece, Ireland and Australia.

Based on N.U.in program advertising and student Instagram accounts, the life of an N.U.in student is a glamorous one. They spend their weekends traveling to new and exciting places like Paris and Santorini. They eat delicious food like gelato and wienerschnitzel and immerse themselves in the art of Picasso and van Gogh. They gain new perspectives and take on new challenges.

However, there is a side that people don’t see, said many students who spoke to The News. While that picture-perfect experience is true for many, there are others that left the N.U.in program feeling insecure about their friendships and fearing the move to campus life.

“Not being sure of the security of friendships that you have, especially as you’re transitioning to a bigger campus where you don’t know anyone, is pretty scary,” said Emerson Toomey, a first-year political science major who participated in the London Foundation for International Education program.

Making new friends has proven to be a challenge for some N.U.in students. While some students feel so connected with friends they made in N.U.in that they are not looking to make new friends, others came into the semester knowing almost nobody.

Max Lyakovetsky, a first-year business administration and design combined major who participated in the N.U.in Czech Republic program, said he does want to make new friends, but it’s not an immediate need for him.

“There’s a sense of comfort with the people you already know,” Lyakovetsky said.

Andre Dallaire, a fifth-year industrial engineering major who spent his N.U.in semester in Greece in 2014, said he “should’ve tried harder to make new friends and put [himself] out there more.”

Lauren Barbulescu, a first-year English and communication studies combined major who spent her N.U.in semester in Sydney, Australia, was caught off guard.

“You think you can conquer the world after N.U.in and you don’t expect making friends to be such a hardship,” she said.

Sam Marchesi, a second-year graphic design major who lived in Italy in 2017 with N.U.in, said she wished there had been more transitional support when she arrived on campus.

“I wanted to expand but we didn’t have the support or resources to do that,” Marchesi said. “We were stuck.”

“You have to go above and beyond to meet new people and it shouldn’t be that difficult,” she said.

Another issue arises with housing an influx of students as large as the most recent N.U.in class.

In reality, however, many N.U.in students have been placed in housing that does not align with the traditional first-year experience.

For example, some N.U.in students were placed in housing at 1110 Commonwealth Ave. — an apartment building 2.5 miles away from campus. Northeastern offers shuttles to and from the Commonwealth apartments between 7:30 a.m. and 6:45 p.m everyday of the week. Outside these hours, students have to find their own way to get to and from campus. They are provided with a free semester-long MBTA pass, but that commute is close to an hour during rush hour.

“Because I had to keep within certain hours of travel, it really affected my ability to participate in things,” said Toomey, who was originally placed in an apartment at Commonwealth. “I honestly wanted to transfer out of the school when I was living in 1110 Commonwealth. I feel like Northeastern doesn’t care about the students they put there.”

Toomey said she was able to complete the room change process and move into International Village, or IV.

Barbulescu was placed in a single room in IV despite marking a single as her last preference on her housing form. Barbulescu said she would have prefered a roommate for her first semester on campus to have someone to go places with and make new social connections.

“Having a roommate is nice because you can go to meals and activities together and make friends with their friends,” Barbulescu said.

Lyakovetsky was placed in an apartment in West Village F with five upperclassmen — all of whom are on co-op. From 9 a.m. to 5 p.m. every week day, Lyakovetsky is alone in the apartment. He said he is envious of the tight-knit communities of first-year dorms such as Speare Hall.

Ask anyone how to meet new people in college and they will give you the same answer: Join clubs.

Barbulescu said she has gone to club meetings, but has mostly spent time with people she knew from her time in Sydney.

“It’s hard to be vulnerable and go into something all alone,” she said.

Toomey said she has found clubs to be a helpful way to meet people, noting that she participated in the Social Impact-athon a few weeks ago and has joined the Political Science and International Affairs Student Association and the NU Political Review.

Marchesi said she found her best friends on campus through clubs, but she recognized that this does not happen for everyone.

“We weren’t really encouraged to go out and try things,” she said.

“I really hope Northeastern can create more events to get N.U.in students more integrated with other freshmen,” she said.

Marchesi said she wishes the university was more transparent about the struggles N.U.in students often go through.

“They need to emphasize more that you might have trouble and have support for you,” Marchesi said.

Lyakovetsky said there’s “an invisible distance” between N.U.in students and freshmen who arrived on campus in the fall.

He said more activities are needed to bridge the gap. Dallaire agreed that the experience for N.U.in students and traditional admission students is very different, and that it needs to be addressed.