Gallery 360 journeys through the black experience 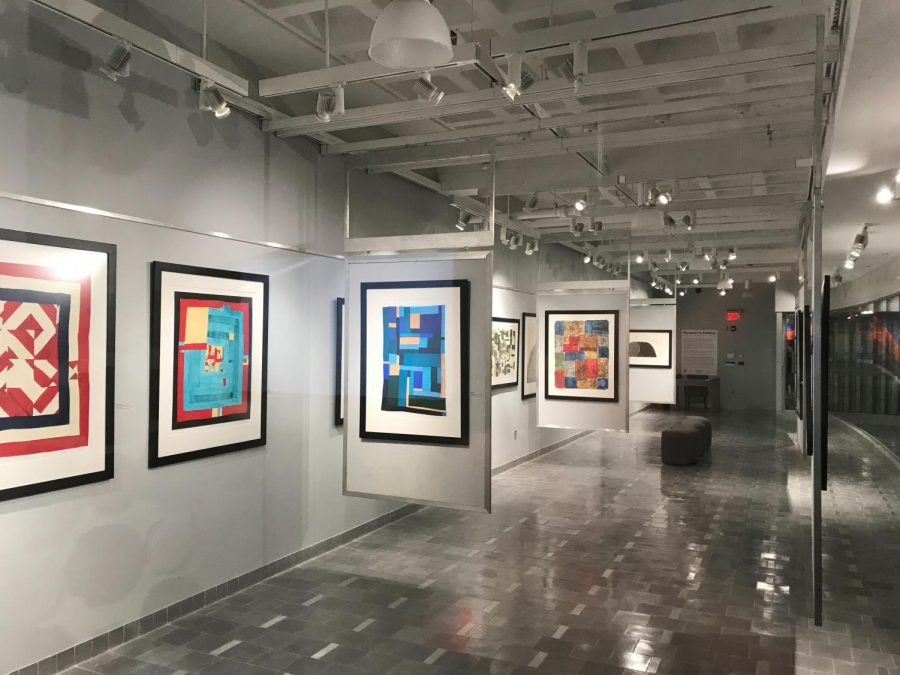 Gallery 360 displays the "Personal to Political" exhibition, which highlights the black experience.

The “Personal to Political: Celebrating the African American Artists of Paulson Fontaine Press” exhibition in Gallery 360 is a journey through the black experience in America. It emphasizes the characteristics of African American history, conveys the state of contemporary black culture and informs the direction of the black identity.

“Personal to Political” is the traveling spring exhibition of Paulson Fontaine Press, an artist residency program in which artists take works in their primary medium and adapt them to a print format, and was curated by the Bedford Gallery at the Lesher Center for the Arts. Only about half of the exhibition is featured in the gallery in Ell Hall, Northeastern’s Gallery Director Thomas Vannatter said.

The exhibition guides viewers through the work of 14 African American artists, each with their own interpretation of black culture. The result is a collection of distinct pieces that illustrates black history and how it has shaped black identity.

“Something I really enjoyed about the process of working on this exhibit was the movable hanging walls,” said fourth-year international affairs major Michael Manzon, who works as a co-op at Gallery 360. “Just by moving their position you can really transform how someone interacts with the room.”

The gallery is made up of four sections, each tied together with its own aesthetic theme. The layout forms a weaving path that separates the distinct visual styles of the artists.

The entrance introduces a Kerry James Marshall piece portraying a woman resembling Harriet Tubman in an unusually dreamlike setting. Marshall is known for his work relating to the civil rights movement and the modern-day African American experience.

The first section mostly contains work by David Huffman who is known for his Afrofuturist cultural aesthetic. This perspective views artistic movements like futurism and science fiction through a black lens. Huffman focuses less on the technological aspects of futurism and more on the direction of the African American cultural identity. “Traumabots” are recurring astronaut characters in Huffman’s work that scour Earth’s racist society in search of both an individual and communal sense of identity.

“The main theme of his artwork is identity and really trying to create your own identity while still recognizing that you are part of a community that has been through trauma together,” Manzon said. “So it’s sort of the collective and the individual identity that you’re trying to both reconcile and keep distinct.”

Huffman relies heavily on urban cultural symbolism. Basketball is present in almost all of his pieces, but he also employs urban vernacular, exotic dancers, prison watchtowers and more as a way to illustrate the world through a black person’s eyes.

Huffman’s “Basketball Pyramid” is a commentary on the collective black culture that exists in unison with the individual identity. The pyramid symbol appears in a few of his pieces, including a sculpture version made of real basketballs.

“A lot of art is about the circumstances in which it was created,” said third-year marketing major Ryan Dent, who visited the exhibition. “Knowing the context of it does something to it.”

The second section contains the work of Martin Puryear followed by the aquatint work of Gary Simmons and McArthur Binion. These artists have a minimalist style, but their work couldn’t be more different.

Puryear, a sculptor known for sleek and abstract designs, recreated his signature sculptures as prints for the exhibition.

“Martin Puryear really did get into printmaking as a medium, [and] it became a significant part of his practice,” Vannatter said.

Two prints show Puryear’s sculpture “Connecting,” which resides in the American embassy in Beijing, from different angles. Another is a side angle of his famous “Big Bling” in Fairmount Park in Philadelphia. He will represent the United States in the 2019 Venice Biennale, an international contemporary visual art exhibition held every two years.

Binion uses a similar technique but applies it to a matrix of photographs. The centerpiece of this section is red-tinted repeating grids of his own self-portrait.

The final section features prints made by the historic Gee’s Bend quiltmakers, four women who carry on a tradition started in a remote African American community in Wilcox County, Alabama, in the early 20th century.

The authentic Gee’s Bend quilts themselves, which are priced in the thousands of dollars, are currently not on display in the exhibition. Instead, the exhibit shows prints of original quilt designs.

Quiltmakers are some of the most renowned self-taught black artists whose craft dates back to the abolitionist movement, and their work is considered by many to be some of the greatest pieces of modern American art.

The exhibit ends with an installation by Lava Thomas. Entitled “His Royal Discography,” it features purple tambourines each branded with an album by popular black music artist Prince.

“Prince is often credited with sort of expanding what the image of what a black man could be [and] the definition of black masculinity,” Manzon said. “That ties into the creation of one’s own identity in relation to the collective.”

The generation of black artists who witnessed the civil rights movement has a strong collective identity, but each individual has a unique perspective that, when put side by side, forms a mural which portrays a whole African American narrative.

“Personal to Political” is on display at Gallery 360 through March 13.