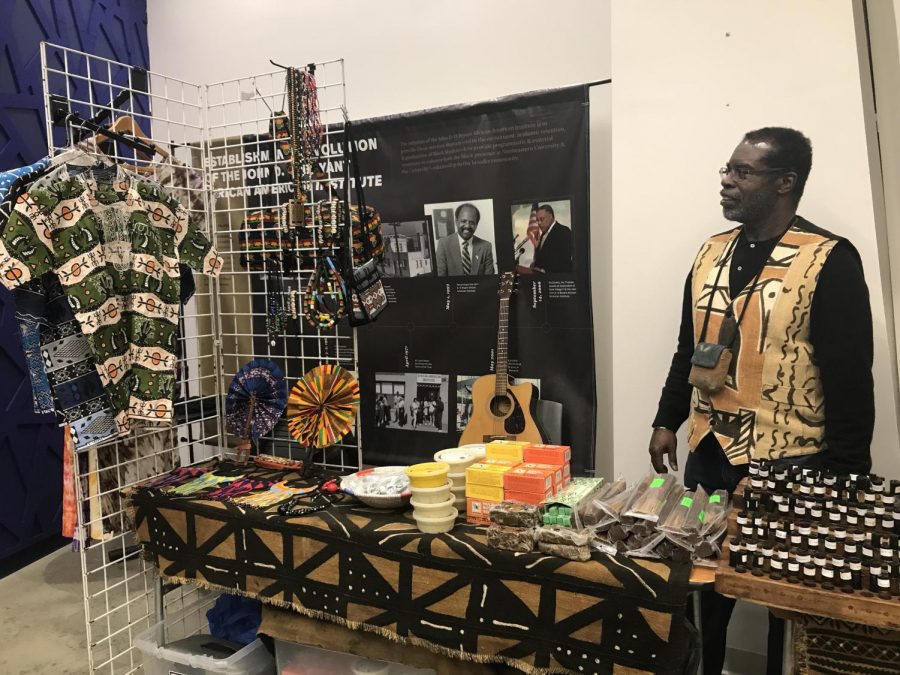 More than 15 black-owned businesses selling everything from skincare products to literotica were at the Black Market event in the Cabral Center Wednesday.

Lori Nsimpasi, the president of Northeastern’s Black Student Association, or NBSA, organized the event. She said the event was inspired by the Black Market in Roxbury’s Dudley Square.

“[That market] brings in black-owned businesses to the space and location where people can help purchase from them and also support black-owned businesses around Boston,” said Nsimpasi, a fourth-year criminal justice and psychology major. “So this is inspired by them, hence the name Black Market. We decided to now bring it to a college campus and hopefully collab with them in the future … so we can cater to college students.

This is the second annual Black Market at Northeastern, and Nsimpasi said they’re “trying to make it bigger and better each year.”

Erykah Kangbeya, a second-year nursing major, came to the market at the recommendation of a friend.

“I was thinking of buying a couple headwraps and stuff like that,” she said. “I’m personally from the Ivory Coast of West Africa, so French is my first language, so it’s kind of nice to be here.”

“A lot of our things are from Africa, and some are not from Africa, but they’re Afrocentric and designed in spirit,” he said, holding up a piece homemade soap. “This is African black soap from Ghana. It’s very good for your skin. It’s very popular, we sell a lot of it.”

Thompson’s company is based in Hyde Park and often sells at events around town. He said that when he received an email from NBSA, he knew he had to come.

Other brands included Pleasant Aroma, a candle company created by Naomi Williams and Dominique Charles, and SoBos Apparel, a clothing company that encourages people to take control of their circumstances and be bosses, according to their website.

“The Frolic’s Charisma,” a book by Khalid Mustafa, was also sold at the market. This book is self-described to be “the optimum voyeuristic passage of seduction, romance and passion.”

“There’s also a couple venders that are students as well,” Nsimpasi said, “so this also helps serve our own student population and help them promote their business within the college community. So we reach[ed] out to them, of course, and made sure they had a spot in this event.”

Jada Turner, an NU alum, also attended. She is the founder of BGM Apparel, which stands for Black Girl Magic.

“It started while I was in grad school at Northeastern. [I] just [got] inspired about supporting black women, supporting all that they do, all that they contribute to society,” said Turner, who graduated in 2014 as a business administration major.

Turner said she uses her brand as a “vehicle for [her] own passions,” including graphic design. She also uses her company to provide opportunities for students.

“For example, I did a bunch of internships, so I had people as social media … somebody that ran the photoshoots, somebody that was managing our content on the website,” she said. “So, I use it to share my skills and share the platform that I’ve created while I was at Northeastern, and the community has supported me.”