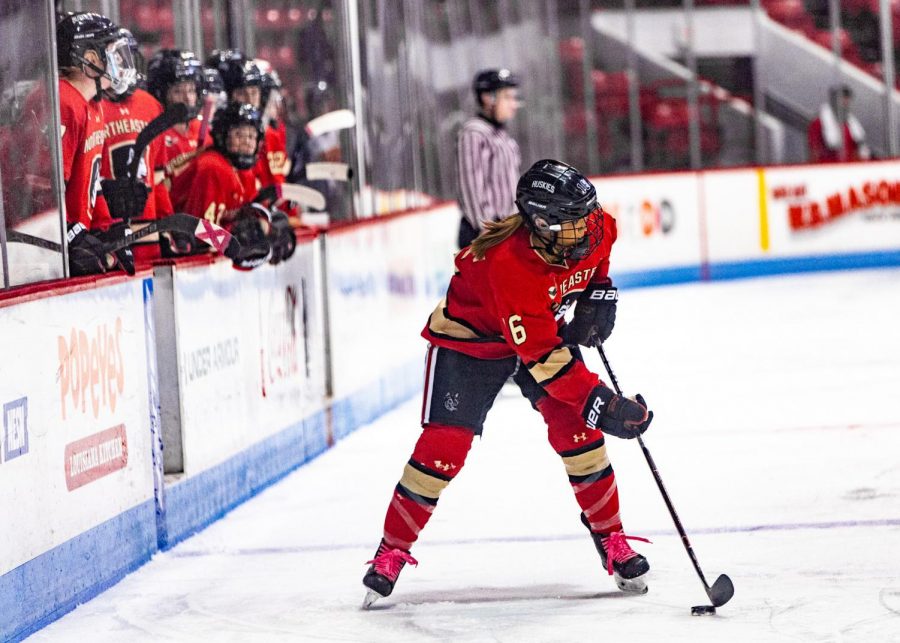 Junior forward Matti Hartman controls the puck on the wing during a prior game against Vermont.

The Huskies rebounded nicely from their midweek loss to Boston College, scoring twice in the first period at Providence and getting 31 saves from Aerin Frankel to spoil PC’s senior day and clinch the regular season Hockey East title with a 3-1 road win.

Despite struggling offensively midweek, the Huskies burst out of the gates with a two-goal first period, the first of which came from sophomore defender Skylar Fontaine. Attacking on the power play, junior defender Codie Cross slipped a pass back to Fontaine in their own D-zone, allowing Fontaine to take the puck all the way up the ice. She made her way through the defense toward the left side of the goal, unleashing a shot that flew past Providence goalkeeper Madison Myers and in off the post.

The goal was Fontaine’s eighth of the year and her first power-play goal of the season. Cross got her eighth assist of the season, the only assist on the goal.

The Huskies got a second goal later in the period from junior forward Matti Hartman. Hartman picked off a Providence pass in the neutral zone and skated forward, finding space on the right wing to release a shot. Her effort went past Myers at her far post for the 2-0 advantage.

Northeastern generated 17 shots on goal in the first period, forcing Myers to make 15 saves. It was a strong opening period for a team coming off a tough loss, and it boded well for the remainder of the game.

Providence snagged a goal back in the second period on the power play. Frankel saved an initial effort, but Providence forward Meaghan Rickard was able to latch onto the rebound and tuck home to make it 2-1.

The Huskies kept the Friars at bay for the rest of the second period, Frankel making 12 saves in the period.

Northeastern came out swinging at the start of the third and found a third goal for their efforts. Fontaine was the scorer again, this time finding a rebound in space on the right wing and, with Myers out of position, slipping the puck past her for her second of the game.

This was Fontaine’s first career multi-goal game at the collegiate level. The sophomore has registered 24 points on the season with nine goals and 15 assists and is second in Hockey East with a plus-34 rating.

Despite being outshot 11-5 in the third period, the Huskies kept Providence off the board in the frame and held on for the win. Frankel stopped all 11 shots to bring her total up to 31 for the day.

With the win, the Huskies clinched the regular season Hockey East title. They clinched at least a share of it with their win over Merrimack last Friday but needed just one more point to put themselves out of reach of Boston College at the top.

Northeastern faces Providence again Sunday afternoon at Matthews Arena as they look to complete the season sweep of the Friars.