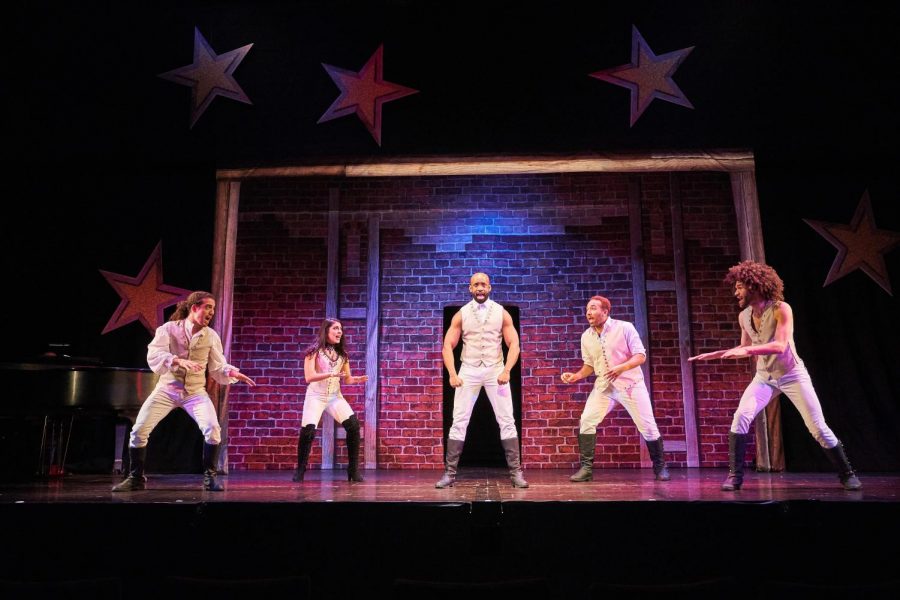 How does a Needham-raised playwright, actor and director manage to create a show that not only spoofs the mega-hit “Hamilton” but also the entire Broadway industry itself?

The answer is simple. Gerard Alessandrini’s musical, “Spamilton: An American Parody,” combines the fast-paced nature of the original show with comedic writing and a trove of hidden musical references to deliver an event sure to excite the theatre kid inside us all.

Alessandrini wrote and directed the show, which will play at the Calderwood Pavilion at the Boston Center for the Arts through April 7. It opened in New York in 2016 and began a national tour since last January.

The plot of “Spamilton” essentially revolves around “Hamilton” creator Lin-Manuel Miranda’s quest to save Broadway. Sick of the same old show tunes, Miranda’s character in “Spamilton” starts a rap revolution and is determined to “not let Broadway rot.”

Alessandrini cleverly weaves this narrative through parodies of Miranda’s original award-winning songs — with the “Broadway rot” line being a riff on “My Shot” from “Hamilton.” This witty wordplay continues throughout the musical. Some highlights from this songwriting technique include switching “You’ll Be Back” to “Straight is Back” where King George steps out to state that introducing rap into Broadway will, unfortunately, make it significantly less gay.

Another favorite is “What Did You Miss?” taking inspiration from the opening song of the second act of“Hamilton”, “What’d I Miss?” In the original, Thomas Jefferson returns to the United States and needs to be caught up on everything that happened while he was abroad. In “Spamilton,” the song pokes fun at one of the original’s biggest critiques: being too fast and having too many phrases for “any man to understand.”

Arguably one of the funniest moments also comes during this song. Eliza, played by Ani Djirdjirian, sings about all the things she’s done since Hamilton’s death. Just as she reaches the part about establishing the first private orphanage in New York City, who walks in from stage right? None other than Little Orphan Annie.

“Spamilton” is filled with Broadway allusions like this. There are jokes about famed musical composer Stephen Sondheim and cameos by Broadway legends such as Bernadette Peters, Barbra Streisand and Liza Minnelli. The show even parodies several other numbers from different musicals like “The King and I,” “The Book of Mormon,” “Chicago” and “Into the Woods.”

That said, you don’t have to get all the references to truly appreciate the show. Being a die-hard Broadway fanatic may grant you a few extra laughs, but there’s enough ragging on the industry as a whole to thoroughly entertain any musical newbie.

It can be argued that you don’t even really need to see (or hear) “Hamilton” to enjoy the performance either. The cast, led by Adrian Lopez playing the bright-eyed and bushy-tailed Miranda, are all incredible and more than capable of performing in the original musical. Djirdjirian, the only female member, stood out among the rest for her powerhouse vocals and hilarious Liza Minnelli impression.

Perhaps the best thing about “Spamilton,” though, is that it’s not just a funnier version of “Hamilton.” It never feels like it is trying to be something it is not. Instead, it’s a surprisingly fun spin on a show that revolutionized the industry in more ways than one.