Women’s hockey to take on Vermont in Hockey East playoffs 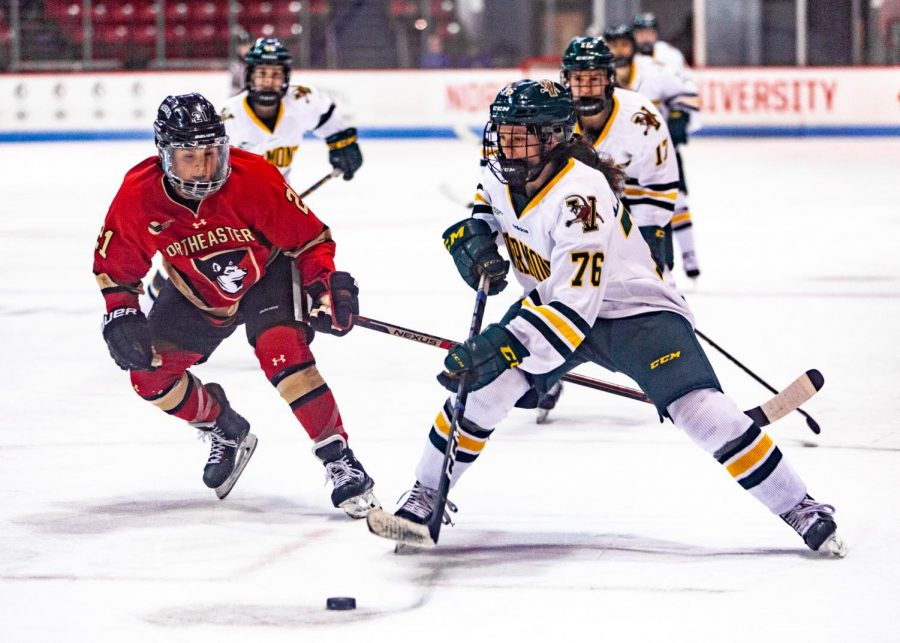 Junior defender Paige Capistran pressures Vermont defender Maude Poulin-Labelle as she controls the puck in a prior game. The two teams will face off this weekend in the Hockey East playoffs.

Northeastern’s No. 3 rank in the national poll says enough about how good they have been this year. They blew through Hockey East, clinching the regular season title with three games to play. They’ve won games against all five of the teams they’ve played in the top-10 of the Pairwise: Clarkson, Boston University (twice), Boston College (twice), Colgate and Providence (twice). They’ve earned a home series for the first round of the conference playoffs against Vermont.

Vermont, however, had to play well in its last few games in order to ensure a place in the Hockey East playoffs, sneaking in as the eighth seed. They swept Holy Cross commandingly over two home games before pulling off a draw against Maine in a crucial game — if Maine won, they would have taken the last playoff spot.

The two teams face off in a best-of-three at Matthews Arena this weekend, with games set for Friday and Saturday with a third on Sunday if necessary. Northeastern (23-5-5, 21-3-3 WHEA) will be looking to utilize their home-ice advantage, but they’ll need to get past the Catamounts (10-18-6, 8-15-4 WHEA), who come in undefeated in their last four.
Expect pressure from the Huskies
In three games against the Catamounts this season, the Huskies scored 11 goals and registered 101 shots on net. Those goals include three from Veronika Pettey, two from Andrea Renner and six from six other players.

Vermont goalkeeper Melissa Black kept her team in the game in two out of the three meetings this season. Black was pulled after the first period in the first matchup after giving up three goals and only making seven saves, but she rebounded well in the final two meetings.

Black made 35 saves in Northeastern’s 2-1 overtime win on Jan. 25, losing her shutout bid with only a few minutes left in regulation before getting the loss after Brooke Hobson’s overtime point shot flew past her.

The next day, Black was faced with another onslaught from the Northeastern attack, and she did not fare as well as she did the prior night. The Huskies scored five times, including a hat trick from Pettey, and went on to win, 5-1. Despite the result, Black played well, making 31 saves. Without her in net, Vermont may have been subject to quite a few more Husky goals.
Top two penalty killers
Vermont finishes the regular season with the top-ranked penalty kill in the conference — the Catamounts have only allowed 11 power-play goals on 112 attempts for a .902 kill rate.

Likewise, the Huskies have also excelled at killing penalties. After only giving up 12 power-play goals during the regular season, they head into the playoffs with a .898 penalty kill rate, second in the conference.

Despite how close the two teams are in terms of kill rates, the Huskies look to hold the advantage. Northeastern’s power play has been more successful than Vermont’s, scoring on 17.2 percent of opportunities compared to Vermont’s 12.3 percent.

The Huskies also have one of the best power-play scorers in the NCAA in Pettey. The forward has seven power-play goals to her name this year, which is the top mark in Hockey East and tied for second in the NCAA. The unit of Pettey, Kasidy Anderson, Alina Mueller, Chloe Aurard, and Hobson — the Huskies’ first line on power plays — has combined for 16 power-play goals on the season.

It will certainly be a test for the Vermont penalty kill unit to face off against the Huskies’ power-play unit, but if the Catamounts can hold strong, they can take away one of NU’s key sources of goals.
NU’s rock at the back
It’s no secret that Northeastern’s Aerin Frankel has been one of the top goalkeepers in the NCAA this season. In 24 games, she has racked up 17 wins and five shutouts (T-6th in NCAA). Her .932 save percentage took a hit after Saturday’s 4-4 tie at Merrimack, but she is still 12th in the NCAA and third in Hockey East. Among goalkeepers with at least 20 decisions, her .804 win percentage is third in the NCAA and at the top of Hockey East. Her 1.833 goals against average is 12th in the country even after taking a hit Saturday.

Despite that abnormally shaky performance against Merrimack, Frankel has been a rock in every game this season. Her 46 saves Nov. 27 against Boston College kept the Huskies in the game and allowed them to take the win in overtime. In her first game of the year, she shut out Boston University on the road with 28 saves, getting an assist to boot. Her ability to stifle strong attacks will be crucial in Northeastern’s playoff run.

Though a bit off-form as of late, she did stop 31 shots in a 4-1 win at Providence to clinch the Hockey East regular season title. Frankel is always capable of the near-impossible. Her lunging stick save the night after the Providence game against the same team sticks out, as it stunned Matthews Arena (and the press box).

Across three games against Vermont, Frankel only gave up three goals. If she can regain her form from earlier in the year and bring her A-game for the playoffs, the Huskies won’t have much to worry about at the back.