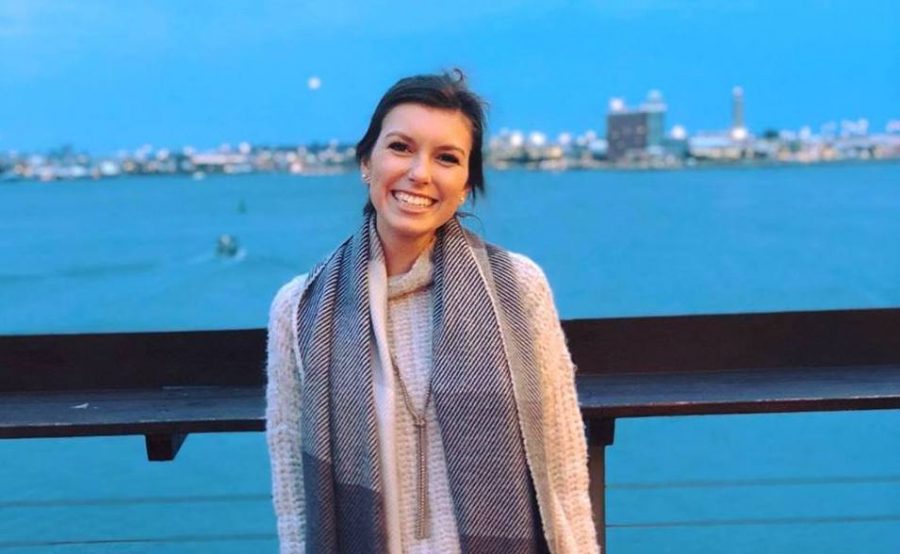 Michaela McLaughlin, an engineering student at Northeastern, died Feb. 12. She was 22 years old.

Michaela McLaughlin – a Northeastern student who is remembered for her strength, wisdom and enduring friendships – died of cancer surrounded by family on Feb. 12 at Massachusetts General Hospital. She was 22 years old.

“When you were with Michaela, everything was simply better. Her smile made you smile, her laugh made you laugh. The dedication she had toward her friends and loved ones was incomparable,” said second-year nursing major and McLaughlin’s sorority “grand little” Maeve McCuine in a Feb. 28 email to The News.

Born Sept. 30, 1996, McLaughlin grew up in the town of Hollis in southern New Hampshire. She attended Hollis Brookline High School, where she was a member of the National Honor Society, the Ski Team and the Math Team, according to a Feb. 14 obituary published in the Nashua Telegraph. McLaughlin had a deep bond with her hometown, maintaining close relationships with many of her oldest friends after graduating from high school in 2015, said McLaughlin’s mother, Iris McLaughlin, in a eulogy she wrote for her daughter.

“Especially as she came home from college, and brought friends along, she realized how much she liked recognizing so many familiar faces, appreciated the farms and beauty of our town, and how she felt a sense of community and belonging,” Iris McLaughlin wrote.

In fall of 2015, McLaughlin began her first semester at Northeastern University studying abroad in Australia through the N.U.in program. Here, McLaughlin met many of her closest friends, including her boyfriend Julian Fricks.

“Neither of us really knew when we started dating, which is interesting,” said Fricks, a fourth-year bioengineering major. “We had to debate over what to choose as our anniversary date. It was all pretty effortless.”

McLaughlin pursued a degree in industrial engineering, with minors in mathematics and business administration. She originally planned to graduate in 2020, although after taking medical leave, this date was moved to 2021, said Brian Hempe, a fourth-year mechanical engineering student and one of McLaughlin’s friends. Despite the change in her graduating class, McLaughlin’s original classmates thought of her often and fondly.

“There was always a thought in our heads that Michaela would be back in class for Capstone and we’d re-do our second year together,” said fellow industrial engineering major and fourth-year Trevor Fick in a Feb. 28 email to The News.

According to a Feb. 19 email sent to members of the College of Engineering by Dean Nadine Aubry, McLaughlin was involved in many NU campus organizations – including N.U.in Campus Connections and intramural broomball. McLaughlin also served as volunteer chair of the Society of Women Engineers, or SWE, and sisterhood chairwoman of the her sorority, Delta Zeta. She was particularly passionate about her involvement in SWE, said McLaughlin’s older sister Kara McLaughlin.

“It was such a wonderful group for her,” Kara McLaughlin said. “I think to have a group of women who were all doing the same thing in kind of a man-dominated field – that was something that she was really proud of.”

Perhaps more than anything, McLaughlin’s friends and family will forever remember the incredible relationships she maintained with so many individuals. McLaughlin had friends from her hometown, from N.U.in, from her sorority and from classes. Despite these many connections, the strength of her relationship with those she cared about never varied from one individual to the next, said fourth-year business administration major Tara Boyle.

“She never categorized [her friends] or made someone feel more special than another,” said Boyle, who was also McLaughlin’s roommate and sorority sister. “She just didn’t think that way. You know, some people think like, ‘Oh, that’s my best friend or whatever, so I treat them like this.’ Michaela actually treated everyone with the same level of respect.”

Hempe had a similar sentiment, emphasizing McLaughlin’s commitment to the bonds she formed with others.

“She really took a personal interest in whoever she was meeting with and whoever she was trying to stay in contact with,” he said. “It wasn’t just surface level connections she ever made with someone, she always went out of her way to make it deep and personal.”

McLaughlin always remembered her friend’s important dates — be it birthdays, interviews or exams mentioned weeks previously, said McLaughlin’s friend and sorority sister Nicole Muir. Muir experienced this recently when she interviewed for her top-choice graduate program. After the interview, Muir checked her phone and saw that McLaughlin had sent her a venmo payment with the instructions, “Get yourself a giant coffee.”

“Not only was she there to listen and be excited with me, but she also knew just what I would want as soon as I was finished,” Muir said in a Feb. 28 email to The News. “She was my cheerleader in so many ways and could anticipate my needs even before I could.”

This thoughtfulness and sincere interest did not waver during McLaughlin’s illness, said Boyle.

“She didn’t let it change her spirit. Even though her body was fighting, it didn’t make her a combative person at all,” Boyle said.

Her friends and family were continually awed by her ability to remain positive and her selfless nature.

“She was always willing to bend over backwards for others. I think that all of her friends would say she was always there for them,” Kara McLaughlin said. “There were times where she would be so sick, and she was still willing to listen to everybody else’s stories and try to help them. She was just so resilient and she taught us so, so much.”

One time, after McLaughlin received a procedure at the hospital, Fricks witnessed the extent of how much she cared for others.

“She was in some sort of a stupor, and she asked me to make sure that anyone else that needed the procedure had gotten it too,” Fricks said. “She always wanted to make sure everybody else was taken care of first.”

McLaughlin accepted offers at two different co-ops during her time at Northeastern. The first was a position for fall of 2016 at General Electric, or GE, Aviation. McLaughlin was never able to start, Fick and Hempe said.

“I was supposed to work with her at GE Aviation, and she got sick right when she took that job. So she wasn’t able to actually,” Hempe said. “I was always pretty upset about that.”

After being declared cancer-free in September of 2017, McLaughlin returned to school for classes in spring 2018, and accepted a second co-op at TJX Industries for fall 2018, Fick said. McLaughlin worked about a month before the resurgence of her cancer. Kara McLaughlin said her sister greatly enjoyed the experience. The position at TJX was ideal for someone with her talent and interests, Fricks said.

“She loves fashion and she loves planning things,” he said. “And that sector of industrial engineering could sort of combine those two passions for her.”

In addition to her many friendships and extracurriculars, McLaughlin enjoyed boating, skiing and completing complicated Lego sets, including models of the Sydney Opera House and the Eiffel Tower, Fricks said. McLaughlin also enjoyed apple picking and watching the leaves change in the autumn, said friend and roommate Laura Jones, a fourth-year business administration major, in a Feb. 27 email to The News. McLaughlin often involved others in these activities, frequently extending invitations to her home in Hollis, said Jones and Hempe.

“Michaela was very family oriented and she always jumped at an opportunity to bring her Northeastern friends home to Hollis for a home-cooked meal,” Jones said. “Michaela always strived to make sure everyone was taken care of, and this showed in her openness to welcome any and all of us into her home and her family whenever we needed it.”

McLaughlin was also a fan of country music, especially of artists Kenny Chesney and Lady Antebellum, Kara McLaughlin said. This musical preference was a source of humor for Fricks and McLaughlin.

“There is this one song that had the line ‘sweeter than a sugar cane,’ which I thought was just really cliché and kind of stupid. We had a long ongoing joke about that song,” he said. “I still don’t really like country music, but I guess I’ll always have a soft spot for it now.”

McLaughlin was a diehard fan of the New England Patriots, and especially of quarterback Tom Brady. Supporting the Patriots was a shared family passion, Kara McLaughlin said. Before this year, McLaughlin had never missed a playoff game. In October, the McLaughlin family joined hundreds of other cancer survivors and caretakers on the field in Gillette Stadium as part of the NFL’s “Crucial Catch” initiative, which raises money and awareness for cancer, according to the NFL’s website. After the demonstration, the McLaughlins stayed to watch the Patriots play. Kara McLaughlin appreciated sharing this moment with her sister.

“You got to be part of the pre-game thing on the field. And she got to bring us as guests. So we got a big flag out on the field before the game started. And they had a luncheon,” Kara McLaughlin said. “So, that was the last game that we went to together. And it was really special.”

In addition to her kindness and friendship, McLaughlin is remembered for her sharp sense of humor and wisdom.

“She had a concept of what actually mattered,” Boyle said. “Just this kind of understanding of actually matters, and what you should and shouldn’t be stressing out about.”

At the close of her eulogy, Iris McLaughlin spoke to her daughter directly:

“As we told you Michaela — you are simply the light leading the way and we will be following you one day. We love you always and forever.”

In addition to her sister and mother, McLaughlin is survived by her father and namesake, Michael McLaughlin, as well as numerous relatives and friends. Her family requests that in lieu of flowers, donations be made to the Tucker Gosnell Center and Caring for a Cure at Massachusetts General Hospital.

Confidential counseling is available to students through University Health and Counseling Services on campus.