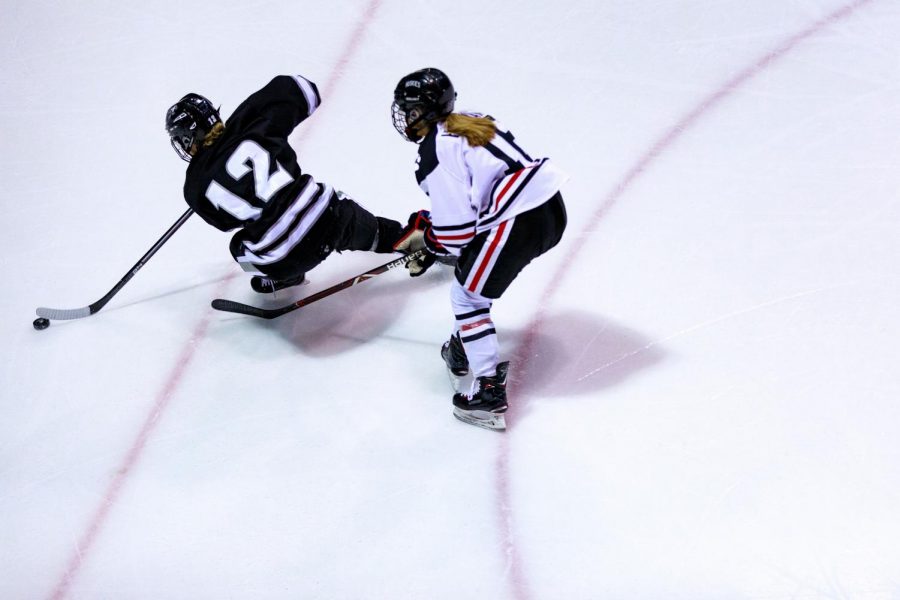 Junior forward Matti Hartman chases a Providence defender in a prior game.

Fresh off being named Hockey East’s Goaltender of the Year Friday night, Northeastern’s Aerin Frankel fought off Providence’s fierce attack to give the Huskies a 3-2 win over Providence in the Hockey East semifinals Saturday, sending them to the conference championship for the third year running.

The Huskies (26-5-5) and Friars (24-11-2) faced off in the Hockey East playoffs Saturday at Providence’s Schneider Arena with a spot in the final on the line. NU won the season series over PC 2-1, with the lone loss coming after the Huskies had already clinched the regular season title.

It was Providence who got on the board first, striking after just 18 seconds. Forward Christina Putigna was sent through on Frankel, and she roofed her shot to give her team a 1-0 lead.

The Huskies hit back quickly, as Hockey East Rookie of the Year Alina Mueller scored her 20th goal of the season. Fellow freshman Chloe Aurard broke up a play in the Providence zone, allowing Mueller to pick up the puck and slam it past PC goalkeeper Madison Myers to level the score.

Frankel stopped 11 shots in the first period, with Providence outshooting Northeastern 12 to six. The shot margin increased as the game went on, but the NU netminder was up to the task.

Northeastern took the lead for the first time during the second, when junior forward Matti Hartman struck one past Myers on the rush. An outlet pass from freshman forward Micaela Sindoris sent Hartman through on a 2-on-1, and she opted to shoot rather than pass, lasering it in at the near post at 8:47.

Providence’s pressure continued to mount, and they pulled the game level at 15:11 of the second. Nifty passing through the NU defense on the power play set up Kate Friesen in front of the goal, and she buried her shot in the bottom right corner, beating Frankel and tying the game at 2-2.

The Huskies would take the lead into the locker room against the run of play, as Aurard gave them the 3-2 advantage with two minutes left in the period. After two NU shots were blocked, Aurard found the puck in a pocket of space in front of goal and beat Myers with a strong wrist shot.

Frankel made 13 more saves during the frame, keeping Providence at bay and allowing Northeastern to hold the one-goal lead.

With their season on the line, Providence pressed the Huskies throughout the third period. However, they failed to beat Frankel when it mattered most, with the NU keeper making eight more stops to bring her total up to 32 for the game.

Aurard’s second-period score ended as the winner, and she finished the night as the Huskies’ only multi-point scorer with a goal and an assist.

NU will face the winner of the Boston University/Boston College game Sunday in the Hockey East championship as they look to repeat as tournament champions.