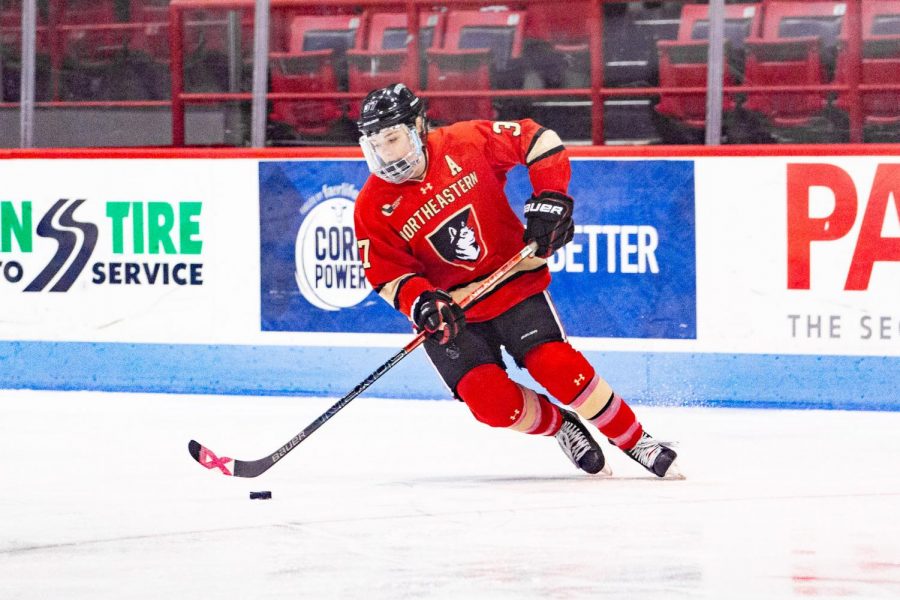 Senior forward Kasidy Anderson makes a cut with the puck in a prior game against Vermont.

NU (27-5-5) and BC (26-11-1) faced off for the fifth time this season in the Hockey East title game. The teams split their previous four meetings 2-2, with the Huskies winning two of three in-conference but losing 4-1 to BC in the Beanpot.

NU struck first through junior forward Andrea Renner near the end of the first period. A shot by Skylar Fontaine was blocked by BC defender Cayla Barnes and the rebound fell invitingly between the circles. Renner was the first to react, going down to a knee and rocketing a shot past BC goalkeeper Maddy McArthur at the right post.

The start of the second period saw two Huskies go to the box, giving BC over 1:30 of 5-on-3 play. They capitalized near the end of it, with forward Caitrin Lonergan finishing a beautiful pass from Daryl Watts to level the score.

Watts later got two huge chances on the rush for the Eagles, but Aerin Frankel denied them both. First, she lunged out to deny Watts on a 3-on-1 break before prevailing again after Watts got the puck from Lonergan on a 2-on-1.

The two teams remained deadlocked through the second period and for most of the third, with Frankel making multiple big saves and the BC defense blocking most of Northeastern’s shots.

It was the Hockey East Rookie of the Year who broke the deadlock, as Alina Mueller scored just as a power play ended to give NU a 2-1 lead with just over five minutes left in the third. Mueller took a point shot that made its way through a crowd, with a great screen by Kasidy Anderson in front of McArthur allowing the shot to squeeze in at the right post.

NU seemed to put away an empty net goal with under a minute left, but it was waved off for offsides. Moments after that disallowed goal, BC got a controversial leveller. After a face-off win in the NU zone, Kali Flanagan roofed a slapshot to beat Frankel with 4.9 seconds left in regulation. The goal came as BC head coach Katie Crowley threw a notebook on the ice, which could theoretically earn a penalty. The goal stood with no penalty on BC, and the game went into overtime.

NU got the winner from senior Kasidy Anderson, who finished off BC with a breakaway goal, picking up the puck in the neutral zone and racing through with one BC defender to beat. Anderson made a move past the defender and set up a backhand shot, firing past McArthur at the left post to give Northeastern its second straight Hockey East title.

The goal sent the Huskies into rapture, and capped off a remarkable conference season. The Huskies cruised to the regular season Hockey East title before beating Vermont, Providence and BC in the tournament for their second trophy.

The all-tournament team included three NU representatives, all of whom also received first-team all-conference honors as well. Mueller, Fontaine and Frankel were all named, and Frankel was named the tournament’s MVP.

Anderson ended her Hockey East career in dramatic fashion as she sent the Huskies to what will surely be a home NCAA tournament game as they will look to add more hardware to their cabinet.