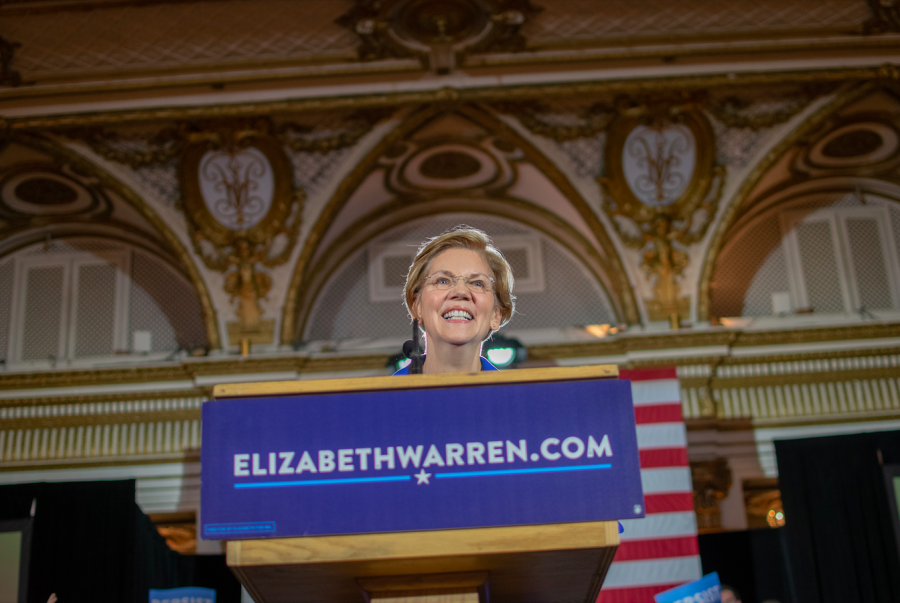 Elizabeth Warren celebrates her re-election to the U.S. Senate at the Fairmont Copley Plaza in 2018.

As of March 7, 14 candidates have already joined the race for the 2020 Democratic presidential nomination, and by many counts, more are on their way. Theoretically, everyone should be able to find someone they like — but many Democrats at Northeastern say they aren’t ready to choose just yet.

The platforms of Sens. Elizabeth Warren and Bernie Sanders appeal to many voters on the far left. Sen. Amy Klobuchar’s popularity in her home state of Minnesota intrigues Democrats looking for an electable, moderate, Midwestern candidate. The unprecedented candidacies of Sen. Kamala Harris and Pete Buttigieg, the openly gay mayor of South Bend, Indiana, give voters in the middle of the party something to rally behind.

For many Northeastern students, however, this Democratic smorgasbord has arrived too large and too early to warrant interest in any specific candidate.

Emily Manti, a second-year engineering major at Northeastern, is one of these students. With coursework and sorority functions on her mind, Manti said, she has little room left for the stress of politics. This early in the campaign, she said, staying informed is an active process, and it’s more effort than it’s worth to try to find an ideal candidate.

“It’s hard for me to find [information about campaigns],” Manti said. “I’d have to find it myself, and I have so much going on.”

She added that once the field is narrowed down — which will make it perhaps seven times less work to keep track of candidates — she may start to pay more attention.

When asked about 2020 campaign announcements, many Northeastern students shared this attitude: They didn’t know much, and didn’t care — yet. They aren’t alone. Over the past two decades, the proportion of Americans who say they follow national politics “very closely” has remained relatively low in non-election years according to Gallup, spiking only in 2004, 2008, 2012 and 2016.

At this point, more than a year and half before the presidential election, most interviewed students said they could only name one or two candidates — a long shot from having found an individual candidate to support. That indicates that right now, name recognition likely plays a significant role in shaping their views.

This trend also lines up with national polling data: A plurality of Democrats who say they would put their primary election support behind Joe Biden, the most well-known candidate in the field, say their second choice would be Bernie Sanders, who ranks second for name recognition.

Even among students who pay attention to politics and can name a variety of candidates, many say that they haven’t made a decision about who specifically to support.

Max Rubenstein, a first-year business administration major, said he needs more information before he can decide who to support.

Manti said that, at least partially, the college environment may be responsible for students’ indecisiveness. She thinks that once she graduates and moves into the “real world,” political decisions will become more important to her. Her thinking is also supported by polling data: Younger people tend to identify as political bystanders more than older people.

“Now, only being surrounded by kids my age, [politics] isn’t really something we even talk about,” Manti said. “When I’m home with my family, I do care about watching the news and reading up on this stuff, but just being in school, I have no idea what’s happening.”

However, those students who choose to surround themselves with politics, as expected, have stronger opinions on candidates.

Ramya Kumar, a first-year health sciences major and member of the Northeastern University College Democrats, said that she has followed Sen. Kamala Harris’s career for a while now. Her feelings are mixed toward Harris, but they are undoubtedly definitive.

Kumar’s grandmother lived in the same part of India as Harris’ mother, so Kumar sees Harris as someone who represents her.

“She’s a champion for racial equality and women’s equality, but at the same time […] I would like to see her changing her actions to be accurate indicators of what she believes,” Kumar said.