Huskies marvel at NCAA bid, reflect on journey to this point 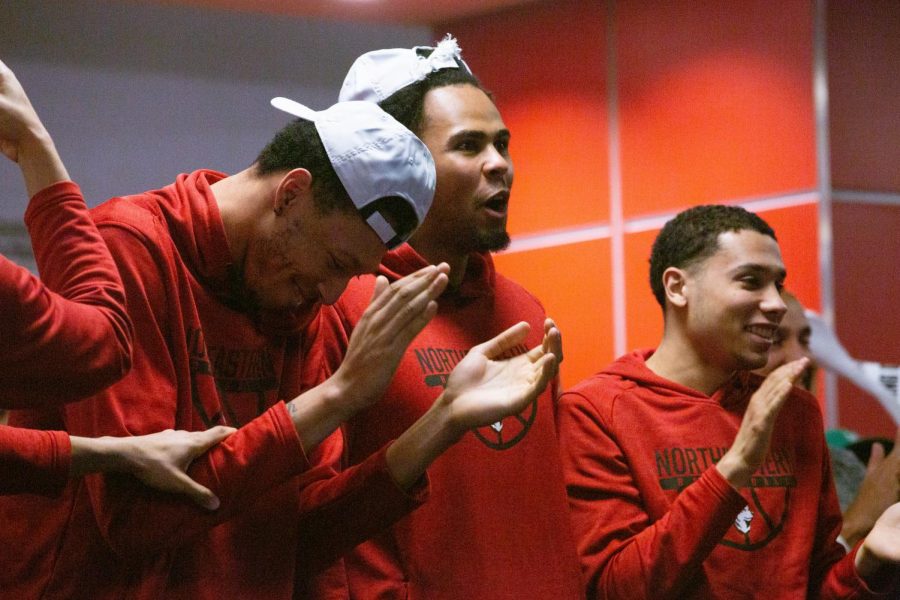 Jeremy Miller, Anthony Green and Jordan Roland celebrate the team's selection to the NCAA Tournament and matchup with Kansas on Thursday.

They knew they were headed for the big dance late Tuesday night when they won the CAA championship and an automatic bid. But for these players, who grew up watching this tournament and came so very close last year, the reality didn’t set in until they saw “Northeastern” flash across the CBS bracket reveal show Sunday.

“I couldn’t even realize how big what we did [is],” said Vasa Pusica, the standout point guard. “Watching the selection show, it was the first time I thought it was real. Realizing, ‘You’re actually in this. You’re going to play a game.’”

The CAA championship game was a familiar scene for most of the roster, albeit with a new result. After the dust settled and the team traveled back to campus, there was a wave of new emotions that come with playing in maybe the wildest, most storied and mythical tournament in American sports. It all came to a head Sunday when the team’s abstract “ticket” to the tournament turned into a finite matchup.

“A lot of emotions were going on when we won down there [in Charleston], but a lot of us knew this feeling wasn’t going to hit until we saw our name up on the board,” said Anthony Green, the 6’10” starting center. “It’s really special to see it there.”

Jordan Roland, the transfer guard who has become the team’s most lethal 3-point shooter, said “It just kind of got real in that moment. You win your conference tournament, you kind of just celebrate, and now it’s like ‘All right, now it’s time to get to work.’”

Bill Coen, Northeastern’s head coach of 13 years, has been to the tournament before, in 2015. He was understandably less awed by the week’s developments, but he recognized what the moment on Sunday meant for his players, none of whom have played in the NCAAs.

“For me, it’s more a celebration than anything else,” Coen said. “The work begins now to prepare our game plan. I’m just really proud and happy for this group of guys.”
A season of adversity
Many analysts chose Northeastern as the pre-season CAA champions after a young, successful team from last season returned and developed further.

Things didn’t go quite as planned. While Hofstra caught fire and leaped to the top of the standings, the Huskies dealt with injury after injury. Coen said the way the team navigated diversity throughout virtually the entire season gave him an idea of what they could accomplish in March.

“I think the most significant game for me, and we’ve had our ups and downs, hit a strong streak when the last wave of adversity hit and Vasa had the flu bug and couldn’t make the trip to Wilmington,” Coen said.

It was Feb. 14 in Wilmington, North Carolina, a CAA game against UNCW. Already without Shawn Occeus and their star point guard, Northeastern lost Jeremy Miller to an ankle injury in the first half and were down to seven players. They trailed by 11 at the half.

Jordan Roland and Bolden Brace turned in 38 minutes each, Donnell Gresham Jr. played 34 and Green played 33. Roland went 7-15 from the field (19 points), Gresham threw in 17 points, Brace scored 16 on an efficient 6-10, and Green grabbed 11 rebounds in addition to his 12 points. The depleted, battered group of Huskies got out of Wilmington with an 81-77 win to run their CAA record to 10-3.

“For that small band of men to be able to stick together and get a win, it just reaffirmed how special this group could be, how mentally tough they were, and how much they really wanted to compete for a championship,” Coen said. “At that moment, when we walked back into the locker room after that game, that was special.”
The right mindset for the big dance
Coen tries to keep his players from getting overexcited or distracted before big games, and it’s worked the past couple years — NU has quite a good record recently in high-profile CAA and non-conference games, and of course in the CAA tournament as well.

But the NCAA Tournament is different. These players have likely been filling in brackets since they were able to hold a pencil, and they remember being glued to the TV for four days straight once a year during the tournament’s incredible first two rounds. To ask them to treat this like any other game is to ask the impossible.

Pusica, ever calm, admitted that watching the bracket reveal Sunday was the first time he’s been nervous all season. Green said his usual calm demeanor wavered as they sat waiting for their assignment.

“Not many things make me nervous, but that kind of got the jitters going,” Green said.

Green said Coen gets them ready for big games by telling them to find their “hype number.”

“[It’s] where you’re not too excited, but not too calm,” Green said. “I think that’s something that tomorrow he’s going to harp on big for us to find. I feel like we got through the excitement just now, everyone’s coming down.”

None of the players have anything with which to compare this. Brace pointed out that the team only gets a couple of days to prepare for most CAA games, so this isn’t much of a departure from a game-planning standpoint.

Coen, though, went to this tournament before. He said, for the most part, he wouldn’t change a thing about how the 2015 Huskies prepared for their first-round game, a game they lost by just four points to heavily-favored Notre Dame.

He did hint that he would be more aggressive with letting players in foul trouble stay on the floor.

“If I have one regret, Scott Eatherton got in some early foul trouble and got stuck on the bench,” Coen said of the near-upset of Notre Dame. “And he really had an outstanding game for us. I think if we’re in that position again I might be a little more aggressive.

“Other than that, I thought our preparation last time was great, our mindset was great. We didn’t back down. Notre Dame at the time was the ACC tournament champion, rolled over Duke and Carolina, they were the hottest team in the country. If we get that kind of effort, you’ll live with the results.”
A March to remember
Sunday’s selection show capped off an eventful weekend in Northeastern sports and their big game in Salt Lake City will continue a remarkable month for the school. With the women’s hockey team making the NCAA quarterfinal, the women’s basketball team making the CAA semifinal and the men’s hockey team pressing for Hockey East and national hardware, it’s an exciting time to be a student-athlete at NU.

“I think it’s almost contagious,” Pusica said. “I read a lot of stuff on Twitter, I’ve been following those guys throughout the year. It gives you more energy and confidence coming into games.”

Pusica’s team will face a tall task on Thursday, and to make this March a truly unforgettable one for the Northeastern community, Coen said the team needs to stick to the existing formula as much as possible.

“I think going in, if you’re worrying about Goliath you’re going to be in trouble,” Coen said. “You’ve got to go in and be true to your identity … There’s a saying, ‘Whether you think you can or you think you can’t, you’re right.’ Why not choose to think you can?