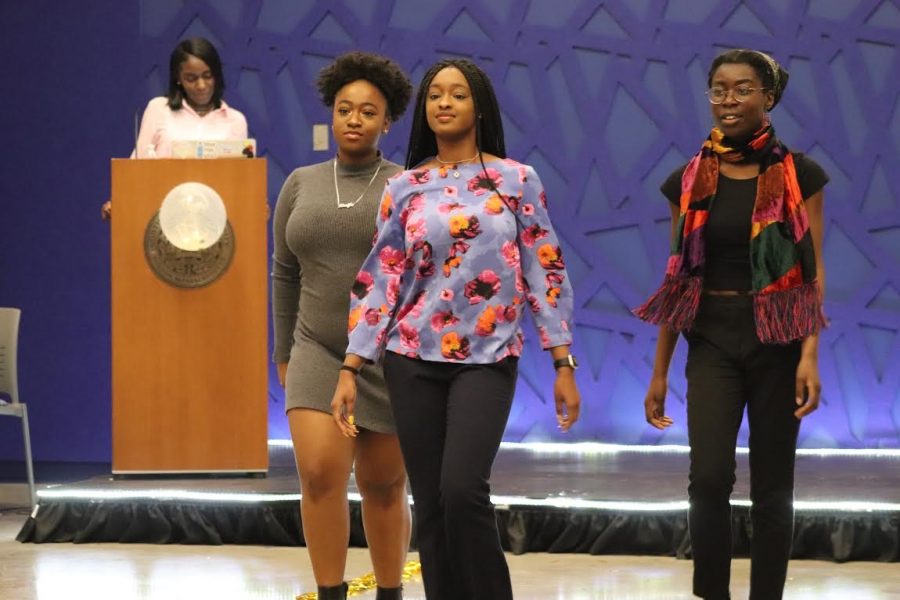 The show was one of multiple events that SIS, a student group for black women and non-binary femmes, hosted throughout February and March in a joint celebration of Black History Month and Women’s History Month. The show aimed to inspire the audience’s future co-op interview attire and help ease the transition into the workplace.

Gold confetti lined the center of a room in the Cabral Center to create a runway for models to walk. Between looks, audience members shared co-op and interview experiences with the rest of the group.

After a few audience members discussed their previous co-op positions, the models were introduced, entering the room one at a time through gold streamers hung from the ceiling. They sported various styles of professional wear from sleek all-black outfits to pinstriped rompers to brightly-colored suits.

Audience members were asked about how they wore their hair for their co-op interviews. Answers varied based on their field of study.

Shellaina Gordon, a second-year biochemistry major, said she feels as though the science field is more concerned with experience than appearance.

“Scientists don’t really care, honestly,” Gordon said. “They mostly just want a pair of hands … All they asked me about was my research experience and what I had to offer.”

Melanie Hamilton, a third-year behavioral neuroscience major, said she only makes adjustments to her appearance for interviews based on practicality.

“I think the only thing I would say is things that impede your work would probably be the best thing to tone down on, like nails,” Hamilton said. “I have super long nails, but I cut them because that would be something that would impede me from work in the future, not because I want to adhere to what they thought.”

Others said they were advised to “play it safe” in how they wore their hair. Shauna Townsend, a Northeastern alum and parent of one of the models, pushed back on such advice.

“All you young women are beautiful, and when you say to ‘play it safe,’ to me, part of that is not acknowledging who you are, because whether you get that position or not, you’re going to be who you are. Period,” Townsend said. “If they’re not accepting you when you walk in the door, they’re going to have an issue with you at some point in time. So they need to be accepting of you from the very beginning.”

Models from the D’Amore-McKim School of Business then reentered displaying new looks, the audience’s energy matching the upbeat music throughout the room.

After a brief intermission and trivia about influential black women in history, the models took to the runway once more, showcasing a “casual Friday lookbook” of chic, all-black apparel with headwraps of different colors and patterns.