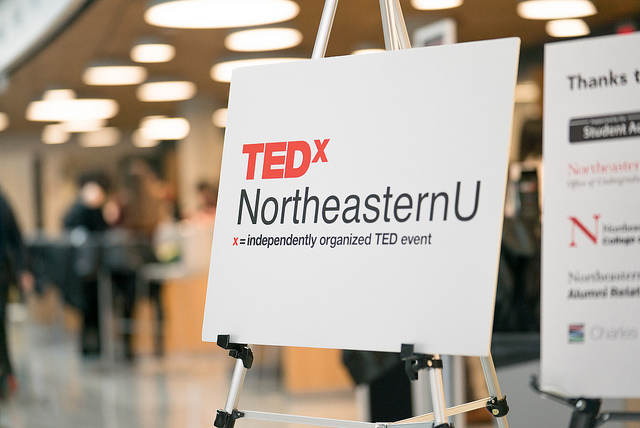 TEDxNortheasternU 2019 hosted 11 speakers and an audience of 300 Northeastern community members on Saturday.

The annual TEDxNortheasternU conference held in the Interdisciplinary Science and Engineering Complex, or ISEC, Saturday featured a diverse crop of speakers including students, professors and alumni with topics including communal architecture, neurodegenerative disorders and art museums. The theme was Branches: Cultivating Connections.

The conference was part of TEDx, a series of local, community-organized events modeled after TED’s Ideas Worth Spreading. Saturday’s event had 11 speakers and an audience of 300 Northeastern community members.

“TEDxNortheasternU is all about bringing people together to be curious and learn and help people learn how to tell stories to a general public,” said TEDxNortheasternU’s co-organizer and co-president Becca Lafair, a fifth-year business administration major.

Before the event and during a 45-minute intermission, attendees perused xLabs set up in the lobby of ISEC. The xLabs were booths with interactive learning displays from clubs like Aerospace NU, Times New Roman, NU Rover, RareNEU and iRobot. Singer-songwriter Carol performed two original songs to open the second half of the conference.

Tara Levine, a third-year business administration major, worked the iRobot booth as part of her co-op at the company.

“It’s fun to be able to come out and show off my love for robots,” Levine said.

The first speaker was Mary Steffel, a professor of marketing at Northeastern and a member of the White House Social and Behavioral Science team. Steffel’s talk, entitled “What You Gain By Giving Choices Away,” delved into how people make decisions and how decision-making psychology plays out in real life. Steffel gave examples of delegating decisions to others, like letting an employee at Teavana choose her tea, and Cinderella leaving a slipper on the steps of the palace for the prince to find her. The main takeaway from Steffel’s talk is that “walking away from a difficult decision empty-handed isn’t your only choice.”

Alicia Payne, a fifth-year political science major, participated as a TEDx speaker for the second time. Her talk focused on her experiences in Strong Women Strong Girls, a mentorship program for girls in Boston public elementary schools. Payne described the importance of representation for young girls of color and the cycle of mutual empowerment.

“It’s so important to raise up other women and girls as much as we can,” Payne said. She said she was nervous to deliver her talk at first due to a lack of public speaking experience, but told herself that it was an opportunity for empowerment.

Communication studies professor Heidi Kevoe-Feldman took the stage to share her research on 911 emergency dispatch centers and how dispatchers converse with callers. It focused on how the science of understanding talk can change the outcomes of these calls.

Claire Coletti, a Master of Architecture candidate, talked about co-living and her vision for her company BauBau. Coletti described the housing crisis in America as “half economic, half cultural.” She said the solution lies in community-based, sustainable architecture. Coletti said  being able to give a TED talk brought her back to her roots.

“I’m used to constantly pitching and talking to investors, but this project started off as a research project,” Coletti said. “What I really got from [TED] was the ability to go back to the ideas and the passion that started [BauBau].”

Other speakers included fifth-year bioengineering major Victoria D’Agostino on decentralized healthcare, alum Amirah Aly on her experience working in the Waszczak lab at Northeastern to develop an intranasal treatment for neurodegenerative diseases and alum Salar Shahini on StreetScan, the street infrastructure technology started in the civil engineering department.

The attendees ranged from students to faculty to alumni to family of speakers. Steffel’s parents even flew in from Indianapolis to see her speak.

Dalila Franzolini and Diana Duque Reinoso, both fourth-year marketing majors, attended the event together. Reinoso chose to attend because Steffel is one of her professors and she wanted to hear her speak. Both Reinoso and Franzolini said they “love TED talks,” and Fransolini added that Kevoe-Feldman’s talk was her favorite.

Shelby Robin, who graduated from NU in December with a degree in graphic design, was previously head designer for TEDxNortheasternU and volunteered at Saturday’s event.

“I was really excited to see the event come to fruition and see all the hard work my teammates put in over the past semester,” Robin said.

Scott Breece, a fifth-year business administration major and TEDxNortheasternU co-organizer and co-president, said his favorite part of organizing the event is “working with the speakers and the team and watching people grow and excel in their roles and what they do.”

Breece said the main goal of a TED event is to share knowledge and build connections.

“There’s something special about exploring new topics and new disciplines and to help create an area to share those ideas,” Breece said.