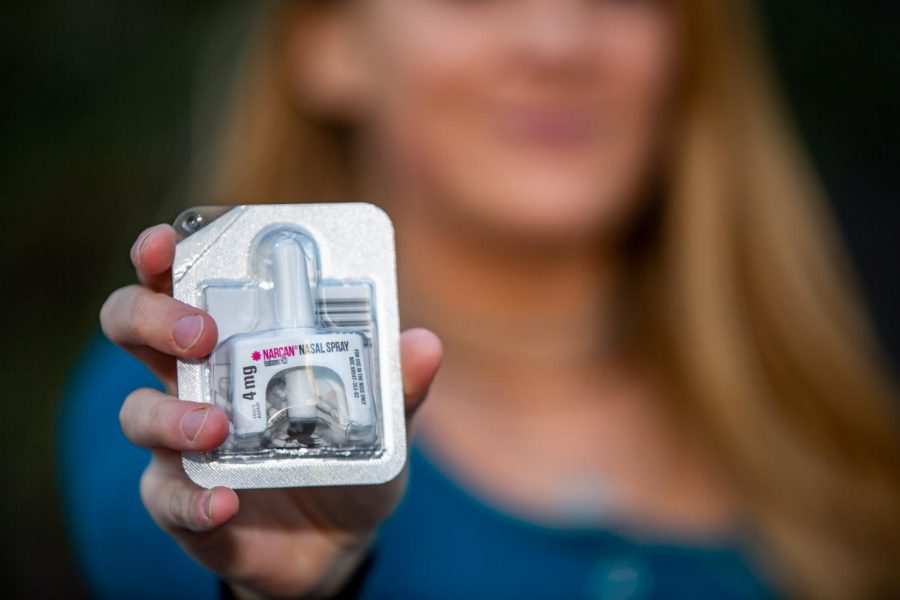 Nola Rich holds up a dose of the Narcan nasal spray, used to temporarily reduce overdoses.

In response to the national and local opioid epidemic, students are leading initiatives to bring more overdose awareness and prevention training to Northeastern. Northeastern University Police Department officers carry potentially life-saving drugs, but there’s a push for broader access to such drugs as well as further education on the realities of drug overdose.

“People who are affected by substance abuse are a very specific community, and medical providers need to be taught on how to deal with that, because if you are not, you deal with it in the wrong ways, and we make the problem worse, we aggravate it,” said Abigail Steiner, a fourth-year health science major who is working on a capstone project to bring opioid training and education to NU. “That’s not what we need. We need these people to get help.”

Opioid overdoses and related health issues caused the deaths of 1,156 people in Boston from 2000 to 2015. The National Safety Council reported this year that Americans have a higher chance of dying from opioid overdoses than car accidents.

The rate of opioid-related deaths in Massachusetts has slightly decreased since 2016, but the impact of the epidemic in Boston may have worsened overall. EMS records from 2017 indicate a 30 percent increase in the administration of Narcan, a brand of the Naloxone drug that temporarily reverses opioid overdoses, and a 54 percent increase in opioid overdose deaths from the previous year.

Naloxone is a prescription drug that temporarily reverses overdoses. It can be administered through a nasal spray (Narcan) or injection (Evzio). NUPD Sergeant Detective Brian Nocerino said all community service officers and police officers carry it and also receive yearly training.

Steiner has worked with the Health in Justice Action Lab at the NU School of Law for two years and is currently collaborating on the capstone project with Faculty Director and Associate Professor of Law and Health Sciences Leo Beletsky. They are in the process of compiling sources for a need-assessment report comparing opioid training and education between Northeastern and other American universities..

“I noticed at my last co-op that there was a huge discrepancy between how to deal with individuals who have substance use issues. People just weren’t educated on it, to say the least,” Steiner said. “They were using stigmatizing language. Everything I was seeing just wasn’t what I had learned at the [Health in Justice Action Lab], so I really saw an issue that needed to be tackled.”

Other than a EMT training class in which Naloxone training is required by state law, Steiner said that she has not encountered a curriculum in her health science classes that addressed or discussed the opioid epidemic, and said that conversations with other Bouvé students and professors so far confirmed her experience.

“We pretty much found that we’re not teaching any info,” Steiner said.

“I think that increasing access to [Naloxone] and increase in the number of people who are trained in how to recognize and respond to an overdose is a great thing and a lot of college campuses are doing that already,” Rich said. “It would be great if Northeastern would.”

The implementation of Naloxone is an ongoing national effort in American universities. Tom Horvath, the founder of Practical Recovery — a San Diego-based company that promotes a “non-12 step rehab and alcohol treatment without stigma, without shame” — said he supports using Naloxone to reverse overdoses as “common sense.”

“For the benefit gain of saving a life … the effort involved is relatively minimal, and training doesn’t have to take very long,” Horvath said. “I recommend getting training.”

Horvath said he created an outreach initiative a year ago to promote the benefits of Naloxone to educational institutions and surrounding communities.

Pro-Naloxone initiatives at Northeastern are already underway. The Health in Justice Lab is conducting broader research on the intersection of public health policy and criminal justice with Zachary Siegel, a journalism fellow at the lab.

“One thing we care a lot about is that Naloxone is accessible to anyone that might need it,” Siegel said.

Siegel said every campus residence hall should have a first aid kit equipped with the antidote.

“If on the floor of every dormitory, there’s a first aid kit with a defibrillator, and everything else that should come with saving someone’s life, Naloxone should also be in that kit,” Siegel said.

Within the Northeastern campus, efforts to introduce trainings are primarily driven by students. On Tuesday, NU’s Neurons Club invited two student trainers from the Massachusetts College of Pharmacy and Health Science, or MCPHS, for an event during the club’s Brain Awareness Week 2019.

“We go directly through students, which I think is empowering in itself … the fact that students are reaching out and saying ‘Hey, we need a training like this,’” said Carly Magoon, one of the trainers invited by Neurons Club and a fourth-year pharmacy doctorate student at MCPHS.

Steiner plans to conduct a survey to evaluate the knowledge level of the NU student body in order to convey a need for more education to Bouvé College of Health Sciences faculty and administration. She said she hopes that the research would be used to ultimately create a guideline for prevention and awareness in nursing and health science curricula.

“The fact that Northeastern, so far, hasn’t put the curriculum in place is discouraging to me,” she said. “I just want to see my peers and the rest of the students have the knowledge to go out into the world and make a difference.”